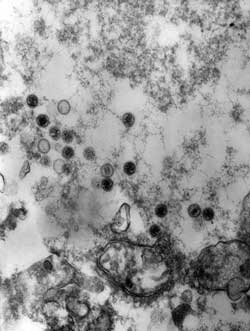 Some researchers suggest that while many of the pathogens found in ME/ CFS patients do not cause ME/ CFS they may make its underlying problems worse. A recent study indicates EBV could possibly accelerate disease pathology in some people by activating retroviral elements in our DNA (Sutkowski et. al.  2004).

It turns out that a significant portion of our DNA (up to 8%) is composed of old degraded and mutated retroviruses that have managed to insert themselves into our genome. Although most are inactive some may not be…… Could the EBV reactivation present in some chronic fatigue syndrome (ME/ CFS) patients be turning on the retroviral elements in their DNA?

The Sutkowski  study found that EBV produces proteins which are able to reactivate a portion of a human endogenous retrovirus K18 (HERV-K18) that produces a ‘superantigen’. Superantigens are proteins produced by viruses or bacteria that are able, by binding to a certain spot on T-cells, to provoke unusually large T-cell responses.

The herpesvirus family is one of three viral families (hesperviridae, retroviridae, rhadboviridae) able to produce superantigens. Dr. De Meirleir has suggested that the RNase L fragmentation and immune system activation in CFS could be due to HERV activation.


Since the proteins (LMP-2A, LMP-1) that activate the superantigen are associated with EBV’s latent phase they are presumably, since EBV is in the body for life, always present. This was a laboratory study – we don’t know under what conditions EBV is able to do this is the body – but it presents the potential for a great deal of immune disruption. .

Since the HHV-6 herpesvirus is also able to reactivate EBV one could envision the following chain reaction; HHV-6 reactivates EBV which reactivates HERV (which causes T/NK cell suppression, immune dysfunction, etc. Some researchers believe an undiagnosed HHV-6A infection could cause many of the problems in CFS.

As yet here is no evidence it is happening in ME/ CFS. We should know more about HERV-K18 and CFS pretty soon – both the NIH and the CFIDS Association of America are funding studies  examining HERV – K18 activity in ME/ CFS

Treatment studies and reports provide the most convincing evidence that EBV infection plays a significant role for at least some chronic fatigue syndrome patients.

An antiviral therapy trial that resulted in much decreased symptoms and increased energy and improved ventricular functioning for about 2/3rds of ME/ CFS patients at 18 months suggests an EBV associated cardiomyopathy may be important in some patients (Lerner et. al. 2002a).

A small 2006 valganciclovir study of patients with increased IgG titers to EBV and HHV-6 found that nine of 12 patients with severe long-term disability returned to normal functioning. A follow-up larger trial – which has not been published – did not have markedly positive effects.

The trial has reportedly been extended to 12 months to determine if longer antiviral treatment will show results. Several doctors including Dr. Peterson and Dr. Lerner have indicated that long-term antiviral treatments are often necessary to show significant results.

A recent study may explain why long time antiviral therapy may be necessary (Hoshino 2009). It found that Valacyclovir reduces cell to cell reinfection but does not effect EBV infected cells. Since cell to cell reinfection is the chief means EBV has of maintaining itself in the body very long term antiviral therapy could reduce EBV infection rates simply by allowing infected B cells to die off over time without being replaced.


Following chemotherapy for Hodgkin’s lymphoma she unexpectedly demonstrated a significant improvement from her chronic fatigue syndrome symptoms. For four to five months she was able to walk for long distances pain free, etc.after which her pain and symptoms gradually recurred. Stem cell therapy successfully treated me recurrence of the Hodgkins lymphoma but did not positively affect her chronic fatigue syndrome symptoms.

She and two other ME/CFS patients with infectious mononucleosis onset were later treated with the B-cell depleting drug Rituximab. Interestingly none of the patients tested positive for active EBV infection using standard serological or PCR techniques. All had high IgG titers and zero IgM titers.

Two experienced dramatic improvement six weeks (and one 26 weeks) after a single Rituximab injection after which their symptoms slowly returned. Follow up injections produced a similar result. The authors of the study postulated that  reduced antibody or auto-antibody production was responsible for their improvements – suggesting that ME/CFS may have an autoimmune component that is possibly driven by a chronic B-cell infection (eg EBV or another virus).  No problematic side effects were reported. The authors are reportedly engaging in further studies.

It appears that we are not nearly done examining EBV’s role in ME/ CFS. The Dubbo studies (and others) have indicated that about 10% of patients with infectious mononucleosis come down with ME/CFS. Why this happens is still unclear but may have to do with a slightly slower immune response that enables EBV to strike more quickly and virulently. 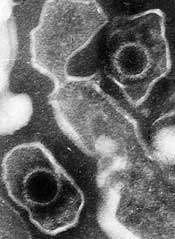 The Dubbo researchers believe the initial EBV infection is resolved but others disagree. Both Dr. Glaser and Dr. Lerner believe that the immune system is able to stop EBV replication but is unable to shut it down completely.

Dr. Glaser believes the chronic production of enzymes produced early in EBV’s life cycle triggers an immune response that is the symptoms present in ME/ CFS. Dr. Lerner believes a chronic herpesvirus infection is damaging the hearts of a subset of”ME/CFS patients.

EBV may be well adapted to attack ME/CFS patients. Several studies indicate that ME/ CFS patients often experience increased stress levels prior to their becoming ill, and EBV targets a part of the immune system (B lymphocytes) that are activated during periods of chronic stress. EBV also appears adapted to thrive during a pronounced Th2 cytokine (anti-inflammatory) response  which some researchers believe is prevalent in chronic fatigue syndrome.

The ongoing Dubbo studies, an NIH funded study by Dr. Taylor, Dr. Montoya’s and Dr. Lerner’s research and the exciting Rituximab study should keep the EBV/ME/ CFS interaction in the news.