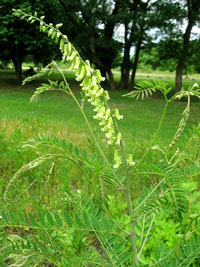 an alkaloid derived from the roots and above ground portions of the Sophora plants. Many plant alkaloids are used in medicine; the best known alkaloids are the opiates but others include quinine (malaria), atropine, vincristine (an anti-leukemia drug) and hallucinogenic plants such as datura and mandrake.

First isolated over 50 years ago the matrine alkaloids – matrines and oxymatrine – have been a focal point of Chinese medical research into the treatment of cancer, viral hepatitis, viral myocarditis and skin diseases such as psoriasis and excema over the past 15 years. Oxymatrine first appeared in the West in tablet form in the U.S. in 1998.

Oxymatrine has antiviral effects in cell cultures and some Chinese studies suggest it can reduce the viral load and liver damage in humans with hepatitis B. Some Chinese researchers suggest oxymatrine injections in combination with Chinese herbs may be as effective as interferon in treating hepatitis but without the side effects. A review of Chinese studies suggested oxymatrine may be able to increase blood flow, increase heart muscle contractility and reduce coxsackie virus activity in patients with viral myocarditis. Oxymatrine is also considered an anti-cancer drug in China.

Oxymatrine is receiving increasing interest in the West with studies focusing on cancer, ischemia-reperfusion and hepatitis B in laboratory animals, culture studies, etc.

Oxymatrine May Be Beneficial in Chronic Fatigue Syndrome (ME/CFS) Because…

it may inhibit the activity of viruses that may be present in some patients.

No studies have examined oxymatrine’s effectiveness in ME/CFS.

Dr. Chia, an infectious disease specialist focusing on chronic fatigue syndrome (ME/CFS), has finished the production of a pure form of Oxymatrine, an alkaloid derived from the Sophora plant in China. Oxymatrine is used to treat many diseases including hepatitis and cancer there. Oxymatrine has been an important part of Dr. Chia’s protocol for several years and it played an integral role in returning his son, Andrew Chia, to health.


The concern over the purity of products coming from China prompted Dr. Chia to produce a more stable and effective preparation of Oxymatrine called Equilibrant. He took the opportunity to add other immune factors to the mix. He stated that

“Equilibrant, containing oxymatrine and a number of immune modulators. This herbal preparation, a dietary supplement, is made from the highest quality extracts under FDA certified Good Manufacturing Practices (cGMP) in the United States. It is also laboratory tested in FDA registered analytical laboratories.”

A Main Focus of Treatment – For many years Dr. Chia used interferons and Oxymatrine to treat his patients but he has dropped interferon use for all but one subset of patient. When I asked him about the efficacy of Oxymatrine a as a stand-alone treatment he stated:

“I have treated 70 patients with the combination of alpha and gamma interferon, and the efficacy is about 47% overall. I reserve the interferon treatment for patients with severe fibromyalgia without debilitating fatigue. The cost is prohibitive ($5000/month) and the side effect does not allow patient to continue the treatment for more than 1-3 months. Few patients had remission of symptoms for as long as 2-3 years. The chance of improvement is minimal, If the myalgia is not dramatically better by 2-4 weeks on interferon treatment.”

Chronic fatigue syndrome (ME/CFS) – “The dose of Equilibrant should be increased slowly. I routinely start with one tablet with a glass of water before or with meal everyday for one to two weeks. If there is no increase of pre-existing symptoms, such as fatigue, myalgia, headache, the dose could be increased to one tablet 2 times a day for one to two weeks, then slowly work up to 2 to 3 tablets 2 times a day. No further escalation of dose should be done if there is significant increase in symptoms. Further titration can be done later as needed, depending on the patient’s response and tolerance.”

Fibromyalgia – “Patients with significant fibromyalgia rarely need more than 1 tablet once or twice a day, but few can take up to 4-6 tablets/day. Pain can decrease as soon as 2 weeks, often afer an initial increase of myalgia. If the increase in pain persists for few weeks without improvement while taking one or two tablets/day, the patient will not likely respond and certainly should not take higher doses. “

Side effects, though usually temporary are not uncommon. They can be ameliorated by slowly increasing the dose.

“Side Effects Increase in symptoms, such as headache, myalgia, arthralgia, stomach complaints or bladder discomfort, can be seen in over 50% of the patients, lasting from a few days to few weeks, but could be relatively mild if the dose is increased slowly.”

You’ll generally know if the preparation works in from one to three months. Longer courses may be necessary if the patient is tolerating the drug well. Expect to be taking the drug for a year (at least) if it works.

Prognosis – “On the average, the patient should have some signs of improvement by 4-6 weeks, but few may take more than 3 month, especially if the dose is escalated over 4- 6 weeks period. Since the symptoms are often cyclical, a longer course may be needed to fully evaluate the benefit of the herb, as long as the patients are tolerating it well. With significant responses, patients should not perform vigorous exercise in the first few months to avoid major relapse of symptoms. Most of the patients will need to take the herbs for more than one year, if there is significant response.”

Patients with symptom flares can be on it long-term without side effects. Maintenance doses are possible.

“Patients with periodic exacerbations of symptoms while taking the herbs will not likely tolerate reduction of the dose after one year. If there is no response, equilibrant should be taper off in about two weeks instead of abrupt discontinuation. We have at least 30 patients taking the herbs beyond 2/12 years and are still doing well without any side-effects. Andrew (his son) is doing well on a maintainence dose of equillibrant, and will be starting pharmacy school in two days.”

Fifty percent of patients have experienced improvement – some dramatic. Relatively long-term use of the herbs is required to prevent relapse in many patients.

Results. “We have given the herb to more than 350 patients over the last 2 1/2 years, and the overall improvement is about 52%. Some patients who lied down most the time went back to work in a few months (great responders), others would have at least enough improvement to do more in a day (parital responders). Relapses are common if patient stopped the herb in 3-6 months after significant improvement (2 out of 3 people). Few patients went in complete remission after taking the herbs for only 3 months, but none of these patients were females.”

Patients with autoimmune manifestations or seizures should not take these herbs.

Warning: “This type of immune modulators should not be used in patients with autoimmune tendency or known seizure disorders.”

“It is best that a physician supervises the patient on any herbal product and blood tests can be done in 2-3 months after starting the herbal product.”

Each Equilibrant box contains 90 tablets. The price is $ 49.95 USD per box. It is professionally packaged in blister cards, which protect the stability of each tablet. You can find the product here for more information.

Dr. Chia stated that the response to oxymatrine in his patients with enteroviral infections was ‘variable’.