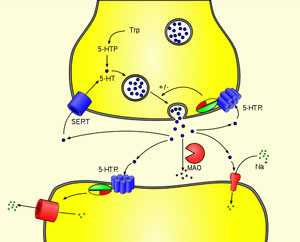 a derivative of the amino acid tryptophan which turns into serotonin, the so-called ‘feel good’ brain chemical. Serotonin brightens mood and induces calm and low serotonin levels are implicated not just in poor sleep, depression, anxiety, pain and fatigue.

5-HTP May Work in Chronic Fatigue Syndrome Because..

several studies suggest that serotonin activity in the brains of chronic fatigue syndrome (ME/CFS) and Fibromyalgia patients is impaired. Dr. Murphee stated that ‘increasing serotonin levels is the number one priority for 95% of the patients I see”.

Selective Serotonin Reuptake Inhibitors (SSRI’s) – SSRI’s are popular anti-depressant drugs that increase serotonin availability in the brain by decreasing the ability of nerves to remove it from the synapses. 5-HTP and L-tryptophan, on the other hand, work to directly increase brain serotonin levels. Dr. Murphee reports that tests in Europe show ‘tryptophan to be just as effective in treating depression as the prescription drugs ELavil and Tofranil which have side effects”

Dr. Murphee recommends 5-HTP be taken on an empty stomach, 30 minutes before bed, with four ounces of juice. Start with 100 mg, then go to150 and then to 200. Don’t go above 300 mg. It may take several nights to have an effect. If it doesn’t work in two weeks, Dr. Murphee recommends you stop taking it and try melatonin. If its working then stay on it for as long as it takes (months – years) to restore your natural sleep rhythm. If you stay on it more than 3 months take a broad-based amino acid supplement to balance out your other neurotransmitters.

Both Dr. Rosenbaum and Dr. Murphee report 5-HTP can create strange and uncomfortable dreams. Dr. Murphee states these dreams usually go away over time. He recommended that if you feel hungover in the morning then decrease the dose. Excessively high serotonin levels can cause insomnia, hyperactivity, headache and increased heart rate. Some ME/CFS patients may have a negative reaction to 5-HTP and should lower the dose.

Anyone taking a prescription antidepressant such as Prozac or Celexa should consult a health care professional before they take 5-HTP. Using 5-HTP in conjunction with anti-depressants can cause ‘serotonin syndrome’; a condition characterized by euphoria, drowsiness, clumsiness, sweating, intoxication and more.

After contaminated tryptophan from Japan caused 30 deaths in 1989 from eosinophilia myalgia syndrome (EMS) tryptophan was banned from the U.S. There was some concern several years ago that a unique contaminant in 5-HTP called Peak X may have caused EMS in three people. Several studies suggest Peak X is not a concern in 5-HTP but both Dr. Bested and Murphee recommend using brands that screen for it.

Allan Logan reports that the unique formulation of ‘Zenbev’ (using pumpkin seed and carbohydrates) provides tryptophan in the correct combination to raise serotonin levels in the brain.