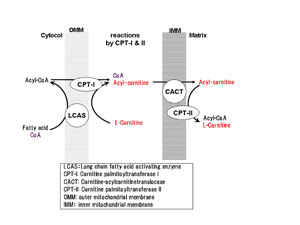 (L-carnitine) is an amino acid derivative found in nearly all cells of the body. It is responsible for transporting fatty acids into the mitochondria – the internal combustion centers of the cell.. Fatty acids play a major role in the energy production of heart and muscle tissues.

L-carnitine appears to protect heart and muscle tissues against the damaging effects of low blood flows (ischemia). It also appears to lower the levels of damaging fats called triglycerides and to increase levels of the ‘good’ cholesterol (HDL cholesterol). Some preliminary evidence suggests L-carnitine may be beneficial in kidney disease and AIDS. There is little evidence that L-carnitine increases energy or boosts athletic performance or fights obesity.

L-carnitine May Work in Chronic Fatigue Syndrome (ME/CFS) Because…

it enhances mitochondrial production and protects against the negative effects of low blood flows both of which may be present in chronic fatigue syndrome (ME/CFS).

ME/CFS patients with low acetylcarnitine levels responded better to azithromycin in another study. Intriguingly, acetyl-L-carnitine was more effective that amantadine in treating fatigue in another severely fatiguing disease, multiple sclerosis. Acetylcarnitine therapy has not been studied in FM.

Typically 500 milligrams to 2 grams daily taken with or without food. At higher levels it is advisable to break up the doses. Can be found as either L-carnitine or acetyl-L-carnitine. Propionyl-carnitine is available in Europe. Avoid DL-carnitine.

Acetyl -L-carnitine and Disease: L-carnitine deficiency can occur because of genetic defects or as a result of other conditions including adrenal insufficiency, low pituitary functioning, AIDS, cirrhosis and pregnancy.