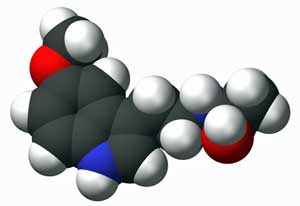 A hormone produced by the pineal gland that regulates the sleep/wake cycle, and promotes deep sleep. Also known as  as N-acetyl-5-methoxytryptamin, melatonin is a potent antioxidant that is able to cross the blood/brain barrier.

Melatonin prepares the body for sleep by causing drowsiness and lowering body temperature.  Melatonin’s antioxidant and other properties have lead to its being studied in several disorders including cancer, cardiovascular disorders, sexual dysfunction and sleep disorders

Melatonin May Work in Chronic Fatigue Syndrome (ME/CFS) Because..

It can assist you in getting to sleep and in achieving deeper sleep.

Dr. Lapp particularly uses it in chronic fatigue syndrome (ME/CFS) patients who are ‘phase shifted’, i.e. who can only get to sleep very late at night. Dr. Lapp states that “For those people that stay awake all night and sleep all day, it’s a great drug for getting you back in the swing of things again.”Dr. Patel reports that some patients see a dramatic improvement on melatonin”.

Dr. Lapp recommends coupling ‘light therapy’ with melatonin. Light therapy consists of getting as much light early in the morning as you can.

Study results in ME/CFS have been mixed. Melatonin production was reported to be normal (twice) and increased (twice) in four studies. Several studies suggest melatonin levels are low in FM.

Drs. Bell, Bested and Lapp recommend 1-3 mgs. before bedtime. Dr. Vinod Patel reccomends using 2 -5 mg at night, 4 days a week,  to avoid dependence. Dr Lapp recommends 1-3 mgs. if under 50 and 3-6 mgs. if older than 50. Dr. Lapp does not recommend it in children younger than the upper teens. Dr. Lapp likes to combine it with ‘light therapy’ – getting as much light as possible in the first 3 or 4 hours of the day.

Because melatonin is a hormone Dr. Teitelbaum recommends that it only be used in levels that the body would normally make or about 0.5 mgs. He reports that most of his patients do well using this amount. Dr. Lapp and Dr. Teitelbaum cautioned there is much we don’t know about melatonin. Dr. Bested believes melatonin should only be taken under the direction of a health practitioner.

Since serotonin is needed to produce melatonin Dr. Murphee recommends trying 5-HTP first and if that doesn’t work then trying melatonin.

At high doses melatonin may increase the levels of prolactin, another hormone which Dr. Teitelbaum notes is already often found in high levels in ME/CFS. Melatonin can also cause stomach upset.

Use a reputable manufacturer. Some brands of melatonin have been found to have little melatonin in them. The Prohealth brand was recommended  by a physician.

(The Phoenix Rising website is created by a layman. It is for informational uses only. Please discuss any treatments in these pages with your physician.)