Orthostatic Intolerance I: The Evidence 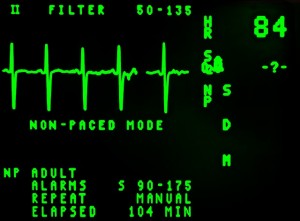 This is the first in a four-part series of research articles on orthostatic intolerance.

Standing has little effect on blood flows to the brain in most animals because their brains are roughly on a horizontal level with their hearts. Humans, however, have to deal with the gravitational inevitability of large flows of blood rushing away from the brain every time they stand.

Every time you stand, about 300-800 mls of blood rush from the trunk of your body to your legs causing blood to pool in the legs and producing about a 40% reduction in the output of blood pumped by the heart.

Unless something is quickly done, reduced flows of oxygen to the brain result in dizziness, fatigue, or other symptoms. The body has four primary ways of combating this.

In short, the body the engages in the following activities in order to maintain blood flow to the heart and brain when one stands: (1) the heart beat increases, (2) the constriction of the arterioles in the legs helps to shunt blood upwards, (3) small contractions in the leg muscles propel blood in the veins upwards, and (4) blood-vessel vasoconstriction triggered by local (non-neuronal) muscle, metabolic and venoarteriolar responses to increased blood flows in the legs reduce blood pooling

A healthy person typically responds to standing with slightly decreased systolic (about -6.5 Hg) and slightly increased diastolic (about +5.6 Hg) blood pressure and a small increase in heart rate. Even so, bloodflow to the brain usually temporarily drops by about 6%. This, however, is unnoticed and in the blink of an eye, for most people the crisis of standing is quietly resolved without incident or notice. For someone with orthostatic dysfunction, however, the inability to maintain proper bloodflow to the brain can have disabling results.

The most common form of orthostatic dysfunction – orthostatic intolerance (OI) – primarily affects younger women (aged 15-45). Not all patients have all symptoms (and, importantly, in delayed OI, patients may never feel dizzy or lightheaded before they eventually lie down).

Other symptoms include headache, difficulty swallowing or breathing, pallor, irritable bowel syndrome and tremulousness.  (Sound familiar?) Approximately 500,000 people in the US are believed to have OI. Like CFS, OI is an umbrella term that includes under it a number of different disorders.

Chronic fatigue syndrome (ME/CFS) patients have demonstrated great heterogeneity in their responses to the tests that delineate malfunctions in standing.

The test’s reproducibility rate is not particularly high; someone who tests ‘positive’ on one day may test ‘negative’ on the next. This field of research is plagued as well by different methodologies (angle of tilt, use of pharmacological challenge or not) that makes it difficult to translate results across studies. It is, nevertheless, the most widely used test in diagnosing OI.

The following measures are often taken during tilt table testing.

Several measures of blood pressure are taken during tilt table testing. While a healthy person typically registers small increases in systolic BP, some people with OI display large increases, others are unable to maintain blood pressure after a time (neurally mediated hypotension, or NMH) and still others maintain increased blood pressure for too long.

To compensate for the temporarily reduced blood volume occurring during standing the heart rate increases momentarily in order to pump more blood to the organs. A greatly increased heart rate during standing is postural tachycardia syndrome (POTS).

HRV corresponds to the complex changes that the heart is constantly making in response to its environment. These changes are regulated by the two branches of the autonomic nervous system (ANS), the sympathetic and parasympathetic nervous systems (SNS, PNS).

The low and high frequency oscillations are believed to reflect, respectively, sympathetic and parasympathetic nervous system activity. Others may reflect the 24-hour circadian rhythm cycle, and so on. Many variables can be formed out of these measures.

Although it seems paradoxical, ‘a healthy heartbeat is slightly irregular and to some extent chaotic’ (Sztajzel 1999). A healthy heart is able to respond to the variety of signals constantly given to it by the brain; an unhealthy heart does not. (Impaired HRV does not necessarily mean a heart is unhealthy – it can indicate problems with autonomic nervous system functioning.)

In the face of a potentially chaotic environment the SNS essentially clamps down on nervous system activity: the patient survives but at a cost of reduced responsiveness to the overall environment.

Despite several years of study, however, the significance of HRV is still unclear. The only time healthy individuals exhibit low HRV is during sleep. Because the input of the higher brain centers to the medullary cardiovascular areas is low at this time, some believe this suggests that reductions in HRV are probably caused by injuries to this part of the brain.

The reduced HRV in combination with the increased LF activity seen in CFS patients suggests either that the sympathetic nervous system has ‘clamped down’ on the hearts responsiveness in order to maintain consistency or that there is  a higher brain dysfunction.

A small 2012 photoplethysmography study found significant abnormalities in pulse timing, both at rest and in response to standing in ME/CFS patients which suggested that reduced blood volume was present. The prevalence of waveform abnormalities in the ear suggested impaired regulation of brain bloodflow was present – a finding that often occurs in POTS patients. A correlation between fatigue severity and reduced pulse timing suggested the finding may be central to the fatigue levels present.

The tilt table is not employed during the Valsalva maneuver. By blowing against a closed tube, increased pressure in the throat reduces venous flows of blood to the heart. (Basically you hold your breath, pinch your nose and blow – like divers do before they descend.) The Valsalva maneuver assesses how the heart responds to these reduced heart and increased peripheral bloodflow and to the increased flows once the maneuver is stopped. It tests how the parasympathetic nervous system responds (via the vagus nerve) to a simulation of the reduced heart bloodflow occurring during standing.