Dysautonomia and POTS: An Overview 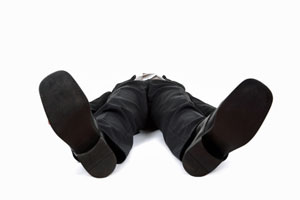 Orthostatic intolerance is a frequent problem for those suffering with dysautonomia.

Dysautonomia, most commonly experienced as postural orthostatic tachycardia syndrome (POTS), is a recognised comorbidity of ME/CFS. There is little debate surrounding this and much research literature exists to support such an association.

Understandably, considering the relative frequency with which some or all of the symptoms are reported, much discussion has occurred among patients, clinical experts and researchers, as to what might be causing the condition, and what role it might play in our understanding of ME/CFS. And there is a suggestion from some, that dysautonomia could be used to create a distinct subgroup beneath the ME/CFS umbrella.

However, dysautonomia is still treated with uncertainty by the medical community in general, especially as doubts remain over the distinct nature of its constituent parts, over exact causation, and with regard to the efficacy of currently prescribed methods of testing, diagnosing and treatment practices.

This leaves the majority of those affected with few places to turn. Despite the few who are diagnosed and have their symptoms properly acknowledged, and even if they do receive treatment that leads to improvement, this effective lack of action from the medical community is not a satisfactory situation for the community of patients as a whole.

The first point to appreciate is that dysautonomia itself is not a single condition. Dysautonomia is an umbrella term used to describe various diagnoses relating to the autonomic nervous system, that have resulted in the malfunctioning we have come to recognise as autonomic dysfunction.

Many different diseases can cause this state of dysfunction and they are generally categorised as either primary or secondary. POTS falls under the primary dysautonomia heading, alongside other diagnoses such as neurally mediated hypotension, inappropriate sinus tachycardia and pure autonomic failure, with the two former conditions also being seen alongside POTS and ME/CFS.

Rather than separate, strictly defined conditions, these diseases are best thought of as a spectrum under the parent heading of dysautonomia, meaning that patients can either have only one of the conditions or, as is frequently seen, have several of these conditions simultaneously. Secondary causes arise as a result of other medical conditions, such as diabetes mellitus, Sjögren’s syndrome or multiple system atrophy.

Given the many different possible causes for a dysautonomic state to arise, it would be logical to assume that the symptoms and severity of dysautonomia vary greatly between patients. While this is often the case, the following symptoms are most frequently found across conditions: 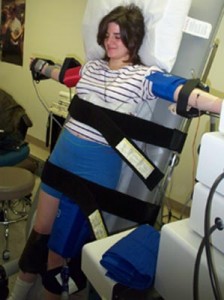 The Head up Tilt-table test is a vital component in making a successful diagnosis of dysautonomia. The linked video explains how the test is done and looks at other tests for dysautonomia.

Neurally mediated hypotension (NMH), as with most diseases relating to a dysfunction of the autonomic nervous system, is not yet fully understood. The exact cause remains a mystery and yet it is recognised as a miscommunication between the brain and the heart following a stressor event, such as a change in posture, moving from a warm to cool environment or sometimes emotional stress.

This specific situation often occurs when the autonomic nervous system is required to respond quickly, whether that be to stimulate vasodilation upon entering a warm room, or with a release of adrenaline (the ‘fight or flight’ response), following a stressful event.

Owing to the dysfunction, the response to these events is abnormal, and causes reduced blood volume within the ventricle of the heart leading to a rapid decrease in blood pressure. Known as a vasovagal response, it is mediated by the autonomic nervous system, and most specifically the vagus nerve. The effects of this can range in severity, from causing mild symptoms such as momentary lightheadedness and fatigue, to causing the patient to faint almost immediately.

While this condition sounds quite serious it is very common within women of child-bearing age and often goes undiagnosed due to the relatively mild symptoms that most patients experience. Nonetheless, NMH can also be quite debilitating when in its more severe forms.

Several studies have reported a higher incidence of NMH in ME/CFS patients and yet the condition often goes undiagnosed. The problem is perhaps exacerbated because the symptoms can be confused with the primary diagnosis and because no specific testing is advised.

NMH can be treated with a combination of an increased salt and water intake, alongside drugs that help regulate blood pressure. Some drugs also function by allowing the kidneys to better retain sodium, while others inhibit the body’s response to adrenaline. Additionally, it’s very important to review any current medications or supplements with your doctor to ensure that these do not include any drugs or vitamins that have the potential worsen the situation.

Inappropriate sinus tachycardia (IST) is defined by an individual’s resting heart rate being abnormally high, often greater than 100 beats per minute (bpm) or rapidly accelerating to over 100 bpm without an identifiable cause (although small amounts of exercise, emotional or physical stress are often triggering factors as seen with many other conditions of dysautonomia).

IST can be caused by an anatomical problem, the heart sinus have an abnormal structure or function, but it is thought to occur much more commonly as a result of dysautonomia. As with many other conditions of dysautonomia, diagnosis is often difficult to achieve and is a diagnosis of exclusion which often means excluding all other potential causes of tachycardia, measuring the heart rate over a 24-hour period and documenting a complete medical history including all current symptoms.

Treatments for IST are still in their infancy, they may include self management, pharmacological therapies and, in severe cases, invasive treatments — it must be stressed that invasive treatments are usually only undertaken if an anatomical defect is the underlying cause. Medications may include beta-blockers, antiarrhythmic agents and calcium channel blockers among many others.

POTS is generally defined by a heart-rate increase of at least 30 bpm when moving from a supine (lying) position, to a standing position. This change can occur anywhere from 1-10 minutes following the change of posture. Often this is tested on a head upright tilt-table test.

The normal response to a change in posture would be a narrowing of the blood vessels to maintain blood supply to the upper body and brain, to counter gravity pulling blood into the lower limbs. In POTS, the heart rate increase happens because the dysfunctional autonomic nervous system (ANS) fails to execute this change in blood vessel dilation. In attempting to compensate for this, the brain directs the heart to pump faster, and increase supply, but this is not a sufficient alternative, and the symptoms associated with POTS are witnessed.

Symptoms are also closely related to the patient’s position, often becoming more exaggerated when standing and then easing when supine. Treatment is targeted at maintaining sufficient blood flow through the upper body and brain. It is often achieved by attempting to increase blood volume with an increased fluid intake, by maintaining a sufficient blood pressure through medication and increasing salt intake.

Attempts are made to improve the fitness of the patient to increase the capacity of the skeletal muscle pump. Unfortunately, this protocol is often very difficult for patients with ME/CFS, given the post-exercise malaise such exercise has the potential to cause, and needs to be handled with care.

Pharmacological treatments are very similar to those seen in NMH and IST, such as beta-blockers and blood pressure medications. However these drugs are often used to help the patient undertake a greater degree of activity, with the aim of improving the success of non-pharmacological treatments. For further information on treatment options, visit POTSUK.

POTS is somewhat unique in that it is often further divided into the following sub-types (many of these groups are not mutually exclusive, meaning patients may fit multiple categories):

Why are ME/CFS and conditions of dysautonomia seen together so frequently?

This is one of the biggest questions facing ME/CFS researchers today. As is well known, ME/CFS is currently by definition a diagnosis of exclusion. Because of this it is fairly clear that ME/CFS patients are not a single homogenous group. Under this disease heading there likely exist a vast array of conditions of which some will be purely conditions of dysautonomia, while others may only incorporate a small degree of autonomic dysfunction secondary to another condition, and similar to secondary POTS as previously discussed. 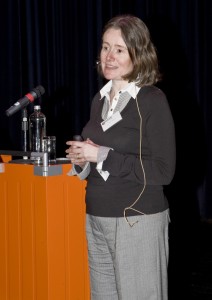 One of the leading researchers investigating how autonomic dysfunction relates to ME/CFS is Professor Julia Newton, at the University of Newcastle. Much has been discussed of her work both here at Phoenix Rising and in the ME community at large. This degree of interest speaks volumes to the promising avenue of research that autonomic dysfunction presents for not only ME/CFS, but many other conditions of as yet unknown origin, such as conditions that still present symptoms despite being treated. This is often seen in a plethora of autoimmune conditions, many of which Prof. Newton has also studied, querying the role that dysautonomia may play in them.

A Sutcliffe/Newton study from 2010 states that “… orthostatic intolerance is a frequently described symptom in both NMH and CFS, with recent studies confirming lower blood pressure in CFS compared to controls.” An earlier paper, 2007, from this group further states that the “[s]ymptoms of autonomic dysfunction in chronic fatigue syndrome” provide significant evidence that “in the Orthostatic Tolerance domain … CFS patients had mean scores [on a well established questionnaire about ANS symptoms] almost four-fold higher than controls.” In addition to this, “A particularly strong association was seen with symptoms of orthostatic intolerance, suggesting that abnormality of dynamic blood pressure regulation is particularly associated with fatigue severity in CFS/ME.”

This hypothesis of abnormal blood pressure regulation occurring as a result of a greater dysautonomia is supported by the work of David Newton, at the University of Dundee. Their study from February 2012 and an earlier one from 2011 outlined their research, and a discovery that ME patients have measurable large and small artery endothelial dysfunction, relative to age and gender matched healthy controls. This endothelial dysfunction could easily be explained by problems with the ANS, which has a controlling effect upon the endothelium.

There can be no denying then that, given the evidence, dysautonomia may be responsible for many of the symptoms of ME/CFS. And while we have yet to solve the puzzle of ME there are potential treatments for dysautonomia which could significantly help morbidity. However, the science pertaining to dysautonomia is still emerging, not unlike that of ME/CFS, and this does unfortunately put the brakes on research and clinical care. Going forward, the biggest question is going to be whether the dysautonomia we are seeing is of primary origin or the result of a secondary problem in a wider picture. This is a question only research into many avenues can truly answer. Hopefully we won’t have to wait too much longer to see all the pieces of the arduous puzzle fit together.

Next post: Embracing Change – ME and the International Classification of Diseases

Previous post: Naturopathy: Happy Anniversary to Me and Dr. Upcott