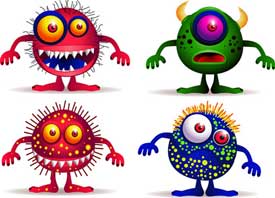 Many ME/CFS patients report that their illness started with an infection. The flu-like symptoms often found at the onset, as well as the immune abnormalities often seen during the illness, have long suggested to researchers that there must be an infectious origin to the disease. However, to date, no single infection has been identified as the cause of ME/CFS.

To complicate matters, many ME/CFS patients exhibit reactivation of a group of viruses called “herpesviruses”. Herpesviruses are found in most of the human population, but in healthy people these viruses remain in a “latent” state, where they don’t cause any issues. In ME/CFS patients, however, these viruses appear to “re-activate” for some reason.

To get a brief idea of the possible roles that infections might play in ME/CFS, you can look through some of the relevant discussions from our community forum:

Was your initial infection a sinus infection? Do you feel like you sometimes lose your sense of smell? Phoenix Rising member Crash Davis looked into interactions between viruses and the olfactory nerve.

Rosemary Underhill was a new medical student at the Royal Free Hospital in London when the great 1955 ME/cfs outbreak occurred. 65 years later, she interviewed 27 surviving witnesses & published a re-examination of this historic event in ME/CFS history!


Will the SARS-CoV-2 coronavirus turn from a pandemic virus into a common cold virus? Instead of showing up as discrete outbreaks, will it eventually appear just as sporadic colds, due to the well-recognized “pandemic-endemic transition” of some new viruses? Interestingly, genetic analyses suggest that the 1889 “Russian Flu” might have been due to a cow coronavirus that jumped to humans, sparked a deadly pandemic, and still survives to this day as sporadic cases of the common cold!

How can viruses persist in the body? Wouldn’t the immune system clear them from the body?

A comprehensive review of the possible factors behind Long Covid had this revealing thing to say: “It is well understood that humans accumulate persistent viruses over the course of a lifetime. These viruses generally persist in dormant, latent or non-cytolytic forms, but may reactivate under conditions of stress or immunosuppression.”

“This is pretty shocking,” says virologist Angela Rasmussen of Georgetown University in response to the news. “Ebolaviruses aren’t herpesviruses” — which are already known to cause long-lasting infections — “and we previously thought that RNA viruses don’t just hang around not replicating at all…”

A scientific review concluded that “there is considerable evidence that prior outbreaks of ME/cfs were caused by one or more enterovirus groups. Furthermore, we find that the methods used in prior studies were inadequate to rule out the presence of chronic enteroviral infections in individuals with ME/cfs.”

Research on herpesviruses in ME/cfs appears to be seeing a resurgence. What are the types of herpesvirus research currently being done?

Infections with herpesviruses such as HHV6 or HHV7 are sometimes found in the blood of ME/cfs patients, but the question of any correlation with symptoms is confused, at best. Could looking in saliva, instead of in the blood, help resolve some of the confusion?

Could ME/CFS somehow be contagious?

There are occasional reports of ME/cfs spreading between non-related members of a household. What does that mean? Has that happened to you?