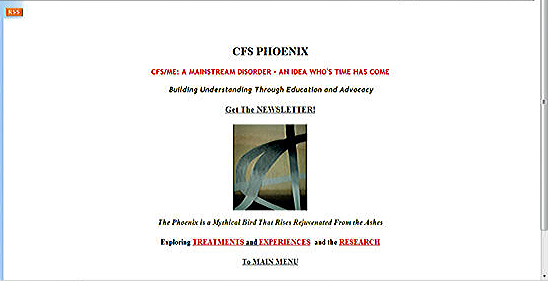 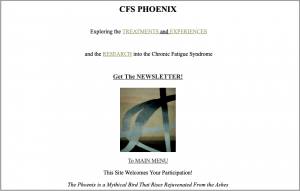 Phoenix Rising was founded in 2004 by Cort Johnson, a person with ME/CFS who wanted to develop a coherent understanding of this illness. Phoenix Rising came, over time, to include hundreds of articles on treatment, resource, advocacy, history and other areas.

First created on a “Frontpage template”, Phoenix Rising was called “CFS Phoenix” (at the https://phoenix-cfs.org URL) from 2004 to 2009. A monthly newsletter begun in 2005, containing extensive reviews of research and treatment studies and events, helped to fill a void in an ME/CFS community eager for information. Phoenix Rising expanded as it added “Resource”, “Story” and “Advocacy” sections to the original “Treatment” and “Research” sections.

Early 2009 saw the emergence of a new, more attractive website built using Visual Web Developer, and a new “aspx” URL (https://aboutmecfs.org/index.aspx). Built using Cort Johnson’s CSS skills, the site was a vast improvement over the previous sites. It did however lack one important component… interactivity. Thanks to a volunteer, that was soon to change. 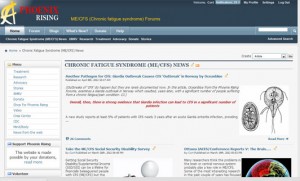 Shortly afterwards, another ME/CFS patient, Gino, proposed that Phoenix Rising host a “VBulletin” discussion forum, which quickly grew to be the most visited ME/CFS discussion forum on the internet.

In 2011 an upgrade to the discussion forum allowed for the production of a front page section where articles could be placed in an accessible format.

Over the more than ten years since becoming a non-profit, Phoenix Rising has worked to build its organizational capacity, to continue to provide the ME/CFS community with accurate, objective, up-to-date information, and to produce other projects to help patients find better practitioners, help them better evaluate treatments, and empower the community.

As Phoenix Rising has evolved, so has its logo. Phoenix Rising’s first logo was taken from an abstract painting by Cort Johnson’s father, which Cort felt protrayed a man trying to rise to his feet.

The logo went through various iterations as we played with colors and form.

In 2010 Lynn Bousquet came up with an attractive variation that was used on the first website. Another variation showed up on the discussion forum. Yet another logo was used as the “favicon” for Phoenix Rising.

Due to the multiple logos, the search for a unifying logo began. And in 2012 Adin found Elizabeth, a college student, who created the elegant logo that appears on all Phoenix Rising’s pages today.