The Chronic Fatigue Initiative and Interview with Mady Hornig

In a follow-up article to the recent IACFS/ME conference presentation in San Francisco, and after speaking at length with Dr. Mady Hornig, ‘searcher’ delves deeper into the impressive work being completed by the Chronic Fatigue Initiative, and focuses in on those cytokine results …

Members of the Chronic Fatigue Initiative (CFI) and Scott Carlson, the executive director of the Hutchins Family Foundation, gave a talk at lunch-time on the second day of IACFS/ME to share their research thus far and their future plans.

This presentation was one of the highlights of the conference to me because of the high quality research CFI is doing.

The CFI was established by the Hutchins Family Foundation in 2010 with a $10 million investment (Wall Street Journal), and their objective is to identify the causes of and treatment for chronic fatigue syndrome.

As far as I know, this occasion was the first time that CFI had officially revealed certain findings.

I think the CFI has already done a fantastic job furthering research into ME/CFS, especially since the U.S. government hasn’t shown any urgency toward researching the illness.

They have already spent much of this initial investment, but are working on identifying several more projects to which they will give additional funding.

The Panelists at the session were:

The team’s first goal was to recruit a cohort from experts in the field (see below).

CFI felt it was important to do extensive epidemiology work and they looked at the large dataset from the Harvard School of Public Health/Nurses’ Health Study, did a separate CFI Clinical Epidemiology study, and also analyzed the CFI cohort.

The CFI researchers are looking into the mechanism of illness. They broke the potential mechanisms down into three basic categories:

Research into mitochondrial dysfunction and immune dysregulation was based on some initial research findings. 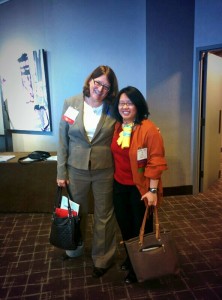 It took exactly one year to assemble, which she felt would usually have required an approximately four-year long project. The complex data made it all the way to analysis within one year.

The resulting clinical dataset and biorepository are available to the wider ME/CFS research community. They will need to get more fecal samples for the upcoming microbiome study (discussed in more detail below) but otherwise there are still more samples remaining.

Their goal is to provide access to the repository for the purposes of “accelerating science and attracting new investigators to the field.”

The cohort consists of severely ill patients with a high level of cognitive and autonomic symptoms.

Dr. Klimas thinks this is very timely data that may help with the debate on case definitions and that the dataset really reinforced the Canadian Case definition.

The average SF-36 was very poor, and is similar to other chronic illnesses such as very severe chronic obstructive pulmonary disease.

Cognitive dysfunction was as important as fatigue.

The more acute the onset, the more the inflammatory symptoms were predominant.  The shorter duration cohort (<3 years since onset) had greater autonomic dysfunction.

Dr. March spoke about the aims of the CFI Clinical Epidemiology study.

They had five aims:

This study looked at 1430 patients. Patients had to be 18+ years old and had to have been diagnosed more than five years earlier, with an emphasis on patients who had been seen for more than 10 years.

They received 960 completed surveys.  Fifty-nine people in the sample were deceased.

As mentioned in our earlier reporting, a majority of the deceased patients were from Dr. Peterson’s clinic.  The reason for this is likely because those patients go back the furthest, so it’s likely due to the fact that Dr. Peterson has been seeing patients since the Incline Village outbreak.  Of these patients 37.8% died of cancer, which is 4 times the background rate of cancer.  Another 19% died of heart disease and 19% more died of suicide.

Of these patients 57% reported a sudden onset and, “for every one-point increase in severity of initial post-exertional malaise, odds of reporting sudden onset increased by 63%.”

The type of onset didn’t impact the severity of symptoms:

“Symptoms either stayed the same or improved slightly; viral symptoms and post-exertional malaise showed the most improvement across sites.”

Not surprisingly, there were a large number of new and co-morbid diagnoses. The average number of co-morbid conditions was 3.5 +/- 2.2. The most common by far was fibromyalgia, followed by depression, anxiety, hypothyroidism and sleep-related issues.

I think the finding that surprised me the most was that 30% of the patients reported at least one remission.  The average number of remissions was 2.5 and the median duration was 52 weeks.  I don’t know how they defined remissions (i.e., was it getting back to 100% or a more limited definition?)

Also of interest is that the more severe a patient’s symptoms were, the more likely he or she was to self-report improvement in health status over time.

The big question is what will they do with all this epidemiological data?  They are circulating two papers — one on the natural course of chronic fatigue syndrome and one on co-morbid and consequent conditions.  They are also looking more in depth at treatments to understand which are most effective.  CFI intends to share data with other researchers to allow for further research. 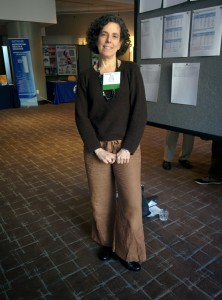 Dr. Mady Hornig then presented on the CFI’s pathogen discovery and pathogenesis studies.  She started by saying it was her first time at the conference and she hoped IACFS/ME could become an annual meeting, instead of a biennial meeting.  We also had follow-up conversations with Dr. Hornig to clarify some questions on April 14th and April 16th.

Her team’s goal is to find pathogenic triggers — microbial or otherwise — that contribute to the initiation, perpetuation, or exacerbation of chronic fatigue syndrome.

They also really want to find biomarkers that serve as vulnerability factors prior to getting ill and after getting ill. They’d like to help parse out the great heterogeneity that is seen clinically in the disorder and perhaps uncover the different biological triggers that cause the illness.

The researchers looked at many factors in the main cohort including geographical residence, as there were clusters in the beginning of the history of the illness in the United States.  They even looked at season and time of day of sampling to make sure the patient samples were closely matched to the controls.

CFI has funded an extension study.  The CFI extension study consists of 50 cases and 50 controls re-recruited from the five original sites.  They are getting fecal samples beginning in May to survey the microbiome and will look at the bacteriome (16S rRNA), the mycobiome (18S rRNA/ITS), and the virome (viral particle preparation/HTS.)

They are repeating immune profiling for longitudinal analysis and will collect PBMCs for future studies. Dr. Lipkin and Dr. Hornig would also like to do a larger, more in-depth study which is currently raising funds through a crowdfunding effort.

CFI has completed a CSF study with Dan Peterson’s patients co-funded by the Evans Foundation, and that dataset has 60 cases and 60 neurological/non-neurological controls.

The team is also doing multiplexing, blood metabolomics, and targeted proteomics  (large-scale study of proteins and their interacting partners) — the metabolomics and targeted proteomics are in progress now.  Metabolomics is the study of the complete set of small-molecule metabolites (including molecules such as serotonin, amino acids, sugars and hormones), which will include metabolites from the microbiome that are naturally absorbed into the blood.

Dr. Hornig thinks that looking at the microbiome and the metabalome in conjunction with one another, and understanding how they correlate, could help lead to new blood tests that reflect disturbances in the microbiome — including the presence of specific pathogens.

Such disturbances may be important in certain subsets in chronic fatigue syndrome, although the CFI investigators aren’t currently funded to study the metabalome and microbiome at the same time, which is work that could help solidify a potential link.  They have also looked closely at cytokine and immune signatures.

Initial screening studies of 265 serum samples (214 cases and 51 matched controls) revealed very few pathogens.  There were 2 cases with HHV-6B and 1 with parvovirus B19.  But they found a lot more when they looked at cytokines.

The cytokine results showed very strong evidence of inflammation in ME/CFS patients.  The researchers saw some very interesting phenomenon related to length of illness when they looked at 51 cytokines in patients from the CFI cohort.  The reasons for this difference are unknown but immune exhaustion could be playing a role.

Similar results were seen for Plasma Th2/counter-regulatory cytokines– IL4, IL10, IL13, and IL1RA were increased in patients ill for less than three years, but patients ill for longer durations were on average similar to controls.

For earlier reporting on what cytokines are and how they may be related to ME/CFS, please see Andrew Gladman’s article on cytokines.

TNFα and IFNγ were increased in early phase ME/CFS, whereas eotaxin and CD40L (which is involved in apoptosis) were decreased compared to controls.

After looking deeper at results, they saw that IFNγ and  IL12p40 were significantly increased.  IFNγ was the most striking result and was also associated with cognitive impairment.  In his summary at the end of the conference Dr. Komaroff said about the extremely statistically significant interferon-gamma results: “IFNγ is thought to be commonly released by viral infection or infection with intra-cellular bacteria, so it suggests but by no means proves that in CFS there may be an underlying infectious agent.”

When they looked at CSF the researchers found that inflammatory cytokines were greatly dysregulated in patients.  Eotaxin was increased in CSF, unlike the decrease seen in plasma in early-stage patients.  The reason for this is currently unknown.

Dr. Hornig mentioned that IL17A antibodies are already in use in rheumatoid arthritis due to IL17A’s association with RA symptoms.  She stated that there isn’t enough evidence to do an intervention yet, but it is definitely worth investigating. It is possible that this could help in early-stage patients in preventing a persistent illness since early-stage patients generally express high levels of IL17A.

Scott Carlson of the Hutchins Family Foundation concluded by stating that they want to continue to further research in CFS and would like their samples and data to be used by other researchers for rigorous research done in a collaborative manner.  We should be seeing a lot more from CFI once their papers get published, the ongoing studies are completed, and the new projects are identified and funded.

Next post: The Mighty Egg: New Life Springs Forth Despite ME/CFS