ME/CFS and the Magic of the Canine Factor 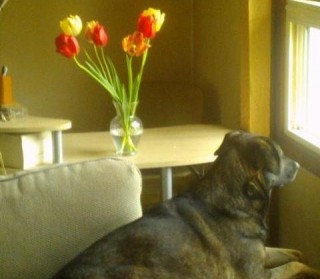 There’s been plenty of research indicating that having pets is good for your health. I never really noticed any particular benefits to having cats, though that may have had more to do with my cats. They’ve been fairly indifferent to my presence and we’ve shared a live-and-let-live type of relationship over the years.

Then I got a dog.

I didn’t even want this dog in the beginning, to be honest. My son Duncan had adopted Cleo, a German Shepherd-Lab mix that had ended up at the Humane Society after an injury that required amputation of her back left leg. But after many months Duncan realized that he couldn’t meet her particular needs.

We don’t know how long Cleo had been on her own, nor how long her leg had been broken before she was rescued. We do know that the experience had left her quite traumatized, and she would become hysterical if left alone in a room for more than 30 seconds.

Duncan couldn’t stay with her 24 hours a day and was becoming desperate about what to do with her. She ended up living with me, my husband Alan and our other son Jesse. I work at home online, Alan is retired due to fibromyalgia and Jesse has ME/CFS, like me. There is always someone at home, and that meant that our house was perfect for Cleo.

When we first got her, I was immensely hampered by a bad knee — it was swollen, sore, and incapable of bearing my weight. I could limp around the house but I couldn’t take Cleo for walks. For various reasons, neither could my two guys.

For the first couple of months, in order to allow Cleo some degree of exercise, I would go in the backyard with her many times a day, and limp around the yard, encouraging her to run. I threw sticks that she would fetch. Well, not exactly fetch. She would get the stick and refuse to give it back to me. So I’d throw another one, and pick up the first one after she dropped it to chase the second one.

This took a lot out of me but it was doable, and that was the extent of her exercise during those first months. After I started seeing a chiropractor for my knee, it started slowly to get better. Then I was able to walk around the yard with her. It hurt too much to walk on pavement, so we stayed on the grass. Both of us got a little exercise. My chiropractor was pleased, she said this would be therapy for my bad knee.

After a little more improvement, I started walking to the first Stop sign near our house. The pavement was hard on my knee, and it hurt during and after our walk. But I was careful not to overdo it and with more encouragement from my chiropractor who could see the ongoing improvement, I persevered.

Eventually we were able to walk to the second Stop sign before turning back toward home. I’d be sore, and out of breath because of having been so out of shape for so long, but Cleo was happy for any activity at all, and whatever pace and distance I was up for, she was in favour of it.

Now, more than a year later, we can walk at a normal (well, normal for someone with ME/CFS) rate for half an hour or more. I am better able to keep up with her, without being dragged at my end of the leash so much.

I know that if I hadn’t had to walk Cleo every day, plenty of those days I would have decided to stay inside. But I didn’t want to disappoint the dog. And in the long run, it helped me to regain the use of my knee.

I thought we must have looked pretty interesting — the three-legged dog out walking with the woman with the gimpy left leg limping along behind her. But now we sail along.

Walking Cleo has proven beneficial in a way that I hadn’t anticipated. Though I’ve lived in my house for 20 years, I know almost nobody in my neighborhood these days. I have gone for walks by myself on these streets for years, without seeing a soul I recognized, and without any greetings or conversations from people on those streets. But in the last year or so with Cleo, I have met many of the people who live in my subdivision.

Some of them stop their car to tell me what a great dog I have. Some approach us on the street, or come out to the road from their yards to see Cleo and have a little chat. She is so used to this that any time someone says “Hello” on the street, she will lay down on her belly and wait for them to come scratch her behind her left ear — the one she can’t scratch by herself, having no back left leg.

She is well-known in our subdivision, and she has helped immeasurably to diminish the feeling of being invisible that so often accompanies a chronic condition like ME/CFS.

The sense of isolation and loneliness that is also part of the chronic package has also eased somewhat, for all of us at the Smith house. She follows me around the house, always interested in knowing what we might be doing next.

She sleeps in Jesse’s room, and cuddles with him. She is his friend who requires little and offers up unconditional love and attention. When he’s tired and needs to be curled up on his bed, she is happy to spend time with him.

When Alan grabs his shoes, getting ready to go out to do some shopping, or run errands, Cleo protests, begging him to stay home with her. When he gets back, she meets him at the door, with tail wagging, looking for a chin scratch and a dog biscuit. When he sits down, she lays at his feet, content that all her people are back in the nest where she thinks we all belong.

Do you have a pet that brings greater soundness to your soul?

Next post: 9th Invest in ME International ME Conference, 2014 – Part 2: Pathogens and the Gut