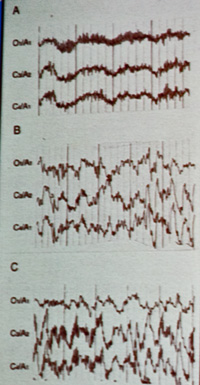 Dr. Klimas is a big fan of sleep studies she believes that virtually everyone who can get one should (but be sure to get the right kind of sleep study!) and here, in a pretty nice sized study (61 patients), we got a good look at the sleep problems present in chronic fatigue syndrome. One problem sleep researchers seem to be focusing in on is called ‘alpha intrusion’. Alpha intrusions refer to an intrusive kind of brain wave pattern that shows up in chronic fatigue syndrome, fibromyalgia and sometimes sleep apnea patients that interferes with deep sleep. The study looked for alpha intrusions and various other sleep maladies.

Alpha intrusions showed up in spades with 80% of patients displaying them. But that wasn’t the only problem; almost 50% of patients had obstructive sleep apnea and 25% had restless leg syndrome. Men had particularly high rates of alpha intrusions; about 50% higher than was seen in women.

In the image to the left the alpha intrusions are on the bottom. Note how prevalent they are in the last two patients.


Dr. Hone, who is based in Mexico City used sodium oxybate (xyrem) to treat the alpha intrusions in 27 patients. She reported that almost all reported improvement in their sleep, what Dr. Hone called Unfortunately no quantitative data was given and it’s unclear just how strong that effect was but Dr. Hone characterized xyrem has having ‘a high impact in the clinical improvement of sleep’.

Conclusion: The morale of this study was that treatable sleep disorders of one sort or another are rife in ME/CFS and that sodium oxybate may be helpful in treating a very common sleep ailment.

Dig Deeper! For more on xyrem and ME/CFS

Dig Deeper! The kind of sleep studies most beneficial for ME/CFS patients

I missed this talk and when I heard one researcher say to another researcher/doctor : “So are you going to use Isoprinosine for your patients now?’ (ha, ha)” “Right!” (ha, ha) the other one said, I thought Oh it must have been another statistic poor study from some doctor with no money. But this was from the Fletcher/Klimas group a very well respected research entity. The clinical measures were pretty sparse but the lab measures were pretty extensive and there were good statistics. Plus Isoprinosine has been around for awhile with several doctors reporting that it can be helpful; this is not the kind of study one should laugh at, that’s for sure.

Dr. Vera, an MD in Miami, did a review of patients from 2004-2008 who had low natural killer cell functioning and had been given Isoprinosine (and no other antiviral or immunomodulatory medications). Isoprinosine was given 3x’s a day (Mon-Fri), 500mg’s on odd weeks and 1000 mgs. On even weeks, for 6 months. Immune tests were given and they were given a clinical score (1-7, 4=baseline status. They better they got the higher score. If they got worse they had a score less than 4.

At six months they showed a highly significant ‘improvement’ and NK cell functioning was up as were T-cell numbers. At 12 months the improvement was much higher and EBV viral loads (VCA-G) had declined.

An Impactful Herbal Antiviral From China? 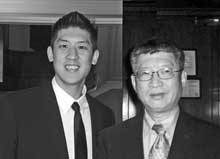 Oxymatrine comes from the root of a plant (Sophora flavescens) found in China. Dr. Chia imported a pure preparation of oxymatrine from China. This is the product that apparently put Dr. Chia’s son, Andrew who was at the conference and is now perfectly healthy over the top while he was taking interferon’s. He gave 400-600 mgs oxymatrine (or lower doses as tolerated) to 100 patients and compared how they did to 114 patients who didn’t receive the drug. All had evidence of enteroviral infection and all were presumably being treated with antiviral drugs. They were simply classified as being much better, better (=positive response) vs. little better, same, worse, much worse (negative response).

Side Effects- About 50% of the patients felt worse at first. Ten percent stopped the medication because of strong side effects. A very small study found evidence of increased Th1/Th2 levels a sign that the immune system was coming back into balance.

Safety concerns about Chinese products persist. Dr. Chia will reportedly be producing a pure and safe oxymatrine product at his office.

Conclusion: An up and coming antiviral product? Patients should wait until Dr. Chia is producing a pure product

TGF-beta 1 in Treatment of Autoimmunity in CFS Associated with HLA DR by PCR. Ritchie Shoemaker.

Dr. Shoemaker is continuing his focus on the TGF-b cytokine – an immune factor the Whittemore Peterson Institute is also looking into. This study applied to ME/CFS patients with high levels of TGF-B and the presence of autoantibodies. (Autoantibodies suggest that an auto-immune process is occurring the immune system is attacking part of the body.).

Dr. Shoemaker gave them Losartan (0.4mg/kg/day), an angiotensin receptor blocker, that commonly used to reduce blood pressure, for up to 90 days. ME/CFS patients don’t typically have high blood pressure but several studies have implicated the rennin-angiotensin aldosterone system in the low blood volumes found in ME/CFS.

TGF-B levels dropped dramatically as did some autoimmune factors but Dr. Shoemaker did not report in his abstract whether his patients experienced increased energy, activity, etc.

Not Much From NADH

Dr. Booth gave a presentation suggesting that mitochondrial function was quite impaired in the disease. NADH is one of several different kinds of mitochondrial enhancers used by ME/CFS patients. This study was the real deal; a double-blinded, placebo-controlled, large study with all the bells and whistles that researchers want. This busy Spanish group (we’ll see them again and again) gave ME/CFS 20mgs NADH daily for 8 weeks and then evaluated sleep, fatigue, and even a detailed metabolic workup on the exercise machine.

No significant differences were seen in fatigue, functioning, quality of sleep but a significant improvement in anxiety was seen. Interestingly a few metabolic measures improved that could’ve resulted in increased cardiac output and increased oxygen availability to the brain. Most metabolic measures did not show significant improvement. While the patients felt calmer none of this resulted in improved quality of life, activity levels, etc.

Conclusion: To some extent NADH seemed to do its job but its effects were limited.

Getting to the Root of Glutathione Depletion? The Methylation Proctocol

Rich Von Konynenburg has asserted for about ten years that the depletion of glutathione the master detoxifier in the body is at the heart of chronic fatigue syndrome (ME/CFS). As he dug deeper into the subject he realized that his original idea providing patients with glutathione enhancing supplements – was too limited and he began to look ‘upstream’ at more fundamental factors. Two years ago the glutathione problem had turned into a ‘methylation cycle’ problem. The methylation cycle controls how much glutathione is available to the cell.

In 2007 Rich created, using Dr. Yasko’s complex methylation program for autism as a foundation, the ‘Simple Methylation Treatment Program’ for ME/CFS . One of the benefits of the program was that it utilized relatively inexpensive supplements. Dr. Neil Nathan MD liked what he saw and agreed to use 30 of his patients to test out Rich’s theory and this lead to the first study examining the efficacy of this protocol in this disease.

The study found significant gains in many measures of the methlyation panel including glutathione levels. They didn’t reach normal levels but they were approaching them and the authors suggested that continued treatment may bring them up to normal. Seventy-one percent of patients reported ‘improvement’. They assessed themselves on a scale of one to ten; average energy level was up 50% (from 4-6), sleep up 20% (4.6-6.4), pain better by 30% (4.3-5.8), etc. Ninety-five percent reported reduced symptoms with an average number of symptoms falling by half.

The average patient wasn’t healthy (six on a scale of ten) with average start levels at out about 4 or 5 but they did receive significant benefits.

Dig Deeper! The Theory Behind the Protocol

Conclusion: A small, preliminary, study but it suggested that the simple methylation protocol – which has the distinct advantage of being inexpenisve – may be helpful

Dr. Cheney: Still the Heart of the Matter? – Oxygen Toxicity and the Heart

Oxygen Toxicity as a Locus of Control for the Chronic Fatigue Syndrome. Paul Cheney, MD.

Dr. Cheney took 26 new patients and 17 health controls provided them with 40% oxygen and then measured Itheir ‘IVRT’. IVRT is measured during the diastolic phase of heart cycle as it expands to fill with blood. This expansion, requires a lot of energy probably akin to the expending energy to blow up a balloon. Once you open the mouth of the balloon the air rushes out; the same appears to be true of the heart. The ejection phase simply releases the energy stored up when you pumped up the heart it requires very little energy.

Dr. Cheney reports that the statistical difference between the two groups was enormous – (p<.0004) a fact that can only be explained if left some data out. It appears that the IVRT in the ME/CFS patients must have dropped more dramatically than those of the healthy controls; i.e. both groups were often toxic to oxygen but the ME/CFS patients displayed much more toxicity.

Cell Associated Therapy for Chronic Fatigue Syndrome: Is this the Next Frontier? Paul Cheney, MD.

Dr. Cheney uses cell-signaling factors (CSF’s) or ‘live cell’ products (among other things) to treat ME/CFS. Kutapressin (Nexavir) is a CSF that he’s used extensively in the past.

The study had 18 patients, average length of illness 15 years (!). Dr. Cheney used CSF’s from the hearts and livers of pigs applied in skin creams and low dose human growth hormone for the first six months; the same approach he was using, he reports in 2000. In the last six months the patients received oral doses of frozen adolescent pig heart and mesenchymal or fetal extract.

There were no changes in functioning in the first six months but some large reductions in IVRT and increased stroke volume were seen in the last six months. This resulted in about a 10 point increase in their quality of life (Karnovsky) scores not a huge amount but potentially significant particularly if you’re very ill; if you’re at ‘4’ ten points is a 25% increase in well-being. Eleven percent of patients (those with environmental sensitivities) were intolerant to the medication.

Conclusion: It took a year (and a change in protocol) but these patients quality of life did improve. The average patient was, however, not well or close to it.

The Japanese are testing substances commonly used in Japan to increase energy and decrease fatigue. Many of them, not surprisingly, are not well known here. Here are some of the substances they’ve found helpful in combating fatigue in children. CoEnzyme Q10 a mitochondrial enhancer

Applephenon Made from an ingredient found in unripe apples, applephenon (apple polyphenols) has attracted considerable interest from Japanese researchers. Several studies have suggested it could improve cardiovascular health a potential concern for some ME/CFS patients.

Relevance – Several studies indicating that ME/CFS patients can have high rates of ldl oxidation and oxidative stress and a poor cardiovascular profile suggest that applephenon (and other antioxidants) may be helpful.

Dig Deeper! For more on applephenon click here and here

CBEX-Dr is a chicken breast extract containing imidazole dipeptides and is a rich source of carnosine and anserine. A Japanese study of health subjects found that those people drinking CBEX-Dr once a day demonstrated less fatigue. Another study of healthy subjects found that those receiving CBEX-Dr had increased VO2 max (energy production) during an exercise test. Blood lactate levels which do not seem to be the problem in ME/CFS decreased significantly as well.

Relevance – VO2 max is lower in a large subset of ME/CFS patients during single or repeat (two-day) exercise tests. One of the findings from Dr. Baraniuk’s spinal fluid proteome study suggests carnosine supplementation may helpful. He is currently testing this proposition.

Conclusion No breakthrough’s and no novel substances for ME/CFS; instead the Japanese is appears to be steadily testing array of fatigue reducing products used in Japan to reduce fatigue.