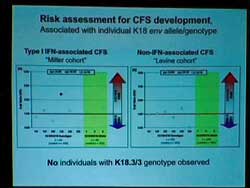 The idea that an undiagnosed EBV infection causes or contributes to CFS is controversial. This type of argument – that inadequate diagnostic procedures prevent researchers from identifying the pathogens causing or contributing to ME/CFS – is frequently made by advocates of the idea that a chronic infectious state is present in CFS.

It may seem incongruous that researchers in the 21st century might have trouble determining (a) the identity of a pathogen, and (b) it’s role in causing or contributing to that illness but such questions can be amongst the most problematic that researchers and physicians face.

In multiple sclerosis, a disease whose locus has been clear, researchers have been arguing for at least a decade if the damage is caused by a pathogen and, if so, which one is responsible.

How many chronic fatigue syndrome patients might be affected by Epstein-Barr virus activation? Unfortunately given the controversy over how to accurately diagnose EBV activation and the few studies on the subject it’s impossible to tell. Lerner’s finding that serum EBV VCA IgM positive antibody titers were identified in about 60% of 58 patients suggests a significant portion of patients could have EBV activation (Lerner 2004).

Two research groups, one headed by the Ronald Glaser and one by Martin Lerner, assert that the medical establishment has missed evidence of a chronic EBV infection in ME/CFS patients. (See Appendix for CDC guidelines for diagnosing EBV infection).

Glaser believes that the immune systems of ME/CFS patients are, in fact, largely effective at inhibiting EBV from replicating but that they are unable to shut it down early in its life cycle. In this scenario EBV is active but not producing viruses (virions); instead it’s producing proteins that trigger an immune response which is causing the symptoms in the disease.

Glaser argues that since the traditional antibody tests measure antibodies produced to antigens produced later in the infection that while they may catch signs of viral replication they miss signs of early EBV activation.

Glaser believes that cytokines (IL-1, IL-6, TNF-a) produced in reaction to these early proteins cause the ‘sickness behavior’ (i.e. lethargy, fatigue, etc.) we call ‘CFS’. He found that adding the dUTPase enzyme to immune cells called monocytes (but not others) resulted in greatly increased levels of IL-1B, IL-6, 8, 10 and TNF-a and increased NK cell activity.

Some evidence suggests that early EBV activation is common in individuals with poorly functioning immune systems. Researchers have found antibodies to early EBV enzymes in a number of immunosuppressive diseases including HIV.

When mice infected with another herpesvirus (CMV) were subjected to an immune stressor (TNF-a), they were found to produce only early EBV proteins. This suggests that having multiple herpesvirus infections could predispose one to early EBV enzyme production. A number of situations appear then to put one at risk of early EBV activation.

It is not clear though that early activation is necessarily harmful. The CDC states that patients who have successfully resolved an EBV infection can display high antibody titers to early EBV antigens for years without being symptomatic.

The early EBV enzyme theory is not new – it’s simply a poorly studied one. Jones and Glaser first found a relationship between CFS and antibodies to these enzymes in 1988 (Jones et. al. 1988).  A small 1991 study found an early viral protein, DNase, was expressed in all six ME/CFS patients.

Dr. Glaser’s theory purports that the cytokine cascade triggered by the early EBV enzymes is causing the symptoms in chronic fatigue syndrome. The cytokine picture in ME/CFS is, however, unclear. While some studies have provided evidence for increased levels of most of the cytokines he believes play a role in CFS (Il-1B, IL-6, Il-10, TNF-a) others have not.


Two studies from the Dubbo project – which followed people who came down with ME/ CFS after being infected with EBV (infectious mononucleosis) –  found no evidence of increased pro-inflammatory cytokines and a Fletcher/Klimas 2009 study found little evidence of the kind of pro-inflammatory cytokine upregulation Dr. Glaser proposes. None of these papers, however, have specifically focused on EBV activated patients.

EBV in the Heart

Dr. Martin Lerner in Michigan has been investigating viral induced cardiac dysfunction in ME/ CFS for over since 1989. In 1993 Lerner found abnormal T-wave oscillations that appeared to indicate left ventricular dysfunction in ME/ CFS.  MUGA tests were abnormal in about 13% of patients (Lerner et. al. 1993).

Resting ejection fractions were usually normal but increasing the workload often resulted in what Dr. Lerner called ‘gross ventricular dysfunction’. This lead Lerner to posit that the fatigue in CFS is related to a ‘subtle’ cardiac dysfunction (Lerner et. al. 1993).

While cardiac biopsies of 15 ME/CFS patients with high titers for the HCMV antibody were negative for cytomegalovirus (HCMV) a morphological examination of their heart tissues revealed heart fiber disarray, dissolution, ‘dropout’ and occasional hypertrophy.The cardiac biopsies had to be stopped after some patients developed extensive bleeding.

Ultimately Lerner and his group developed a theory  similar to Dr. Glaser’s that posits that immune system breakdowns in ME/CFS lead to incomplete/complete herpesvirus (EBV/HCMV/HHV6) multiplication in the hearts of ME/CFS patients.

Lerner, like Glaser, points out that viral studies rarely test for non-structural viral epitopes that can be released during incomplete viral replication. He asserts these early viral gene products interfer with cell metabolism weakening the heart and causing many of the symptoms present in CFS.

If viral replication is somehow thwarted in mid-step then proteins in the capsid or tegument may be released that the immune system could be is poorly adapted to deal with.

Could CFS patients be particularly vulnerable to EBV? The authors of the Dubbo studies suggested a Th2 cytokine shift allowed the virus to strike faster and deeper in ME/CFS patients. Glaser and others suggest that stress could be involved. Interestingly there is a connection between stress, the Th2 cytokine response and EBV activity.

Stress has long been known to increase the risk of herpesvirus (EBV, HHV-6, CMV, etc.) reactivation in humans. About ten studies have indicated that psychological stressors can reactivate EBV. Poor academic performance in combination with high internal demands of perfection was associated with an increased tendency of ‘seroconversion’ to EBV in West Point cadets. Stressors have also been shown to induce the production of the early EBV proteins (enzymes) Dr. Glaser believes is present in chronic fatigue syndrome (ME/CFS). 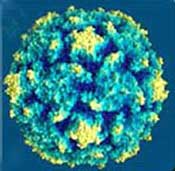 Seroconversion occurs when antibodies to a virus can be detected in the blood stream. This means the virus is active. After replicating inside cells the virion moves into the blood stream to find new cells to infect.

Several studies have indicated chronic fatigue syndrome (ME/CFS) patients have a higher than normal incidence of stressful events in the months preceding their illness (White et. al. 2001). One study found that being female, having family support (?) and having more stressful life events prior to having CFS was associated with poor recovery from infectious mononucleosis (Buchwald et. al. 2000).

A recent study which suggested chronic fatigue syndrome (ME/CFS) patients were more physically active than normal prior to their illness implicated physical stress as a possible contributing factor.

This suggests that chronic stress may increase the risk for herpesvirus reactivation and/or chronic fatigue syndrome (ME/CFS) by impacting immune functioning. But how?  The two stress response systems, the autonomic nervous system and HPA axis, also regulate immune function.

When these systems are chronically activated they appear to thrust the immune system into an a state of Th2 cytokine dominance; a situation we have seen EBV appears to be particularly well adapted to and which some studies suggest is present in chronic fatigue syndrome (ME/CFS). Thus chronic stress may be able to produce an immune state which allows some viruses to proliferate.