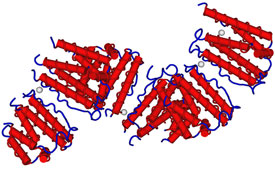 important immune agents produced by the body during infection. They respond to a peculiar kind of RNA called double-stranded RNA (dsRNA) produced by many pathogens. Interferon’s activate many aspects of the innate immune response including natural killer cells, macrophages, and lymphocytes and they induce cells to boost their antiviral response. Interferon’s and other immune agents are responsible for many of the symptoms people feel (fever, fatigue, muscle aches, headaches, depression, etc.) when they have a cold.

One of the success stories of the biotech revolution interferon has received an enormous amount of study since researchers learned how to synthesize it in 1980.

Several different types of interferon are available. Interferon alpha and beta have antiviral properties. IFN-a, used in combination with ribivarin, is reportedly effective in about 50% of hepatitis C patients. Half, however, relapse over time. Interferon-beta has been approved to treat multiple sclerosis.. Interferon-y is primarily an immune regulator that is believed to have relatively weak antiviral properties. It is used to potentiate the effects of the stronger anti-virals, interferon alpha and beta.

Interferon is also often used in combination with chemotherapy to treat cancer and sales top 5 billion dollars a year world-wide.

Interferon Drugs May Be Helpful in Chronic Fatigue Syndrome Because…

they have antiviral properties and can help bolster an underperforming immune system. . Some studies suggest that a subset of patients have increased viral loads and immune deficiencies including reduced natural killer and T-cell functioning. Dr. Chia has reported (at least temporary) success treating patients with different combinations of interferons. (see below).

Alpha 2a interferon significantly increased quality of life scores and natural killer cell functioning in ME/CFS patients with reduced NK cell functioning (but not other patients) in a 1994 study. Dr. Chia reported another small early interferon study by Brook et. al. was successful as well. Since neither study examined pathogens levels the patients under study may have had active infections.

A patient of Dr. Chia’s reported that Dr. Chia’s son, Andrew, benefit greatly from interferon but that he was still plagued with a sore throat and could not exercise consistently. A course of Chinese herbs (including oxymatrine) put him over the top and he is healthy today. She was told that about 50% of ME/CFS patients receive substantial help from Chinese herbs. Dr. Chia will be reporting on the efficacy of Chinese herbs at the March, Reno Conference.

In 2009 Dr. Chia announced that he is no longer using Interferon because he has found that Oxymatrine – an herbal preparation from China – is as effective, is much (much) less expensive and has fewer side effects.

Dr. John Chia reports about 50% success rates using combination IFN alpha/delta therapy in patients with enteroviral infections. Costs are very high ($5,000/month – for one month treatment?) and relapses are not uncommon over the next year. Patients with severe muscle pain appear to receive the quickest and most long-lasting benefits..

Interferon can cause flu-like symptoms, fever, headaches, chill, fatigue, nausea, muscle pain, mood changes and more. Dr. Chia noted that a severe increase in symptoms may occur early in the treatment. Side effects usually quickly disappear once the treatment is terminated.