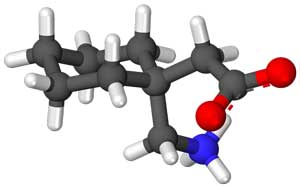 By altering calcium channel functioning in the nervous system, Neurontin decreases the release of pain enhancing and excitatory neurotransmitters such  as glutamate, norepinephrine and substance P. Some evidence suggests both Neurontin and it s close cousin, Lyrica, may regulate inflammation produced through NF-kB pathways.  (Some researchers think NF-kB pathway activation occurs in ME/CFS).

Lyrica (pregabalin), a close relative of Neurontin, was developed as an upgrade to Neurontin by Parker Davis (Pfizer).  Lyrica is reportedly more potent and absorbs better (thus requiring lower dosages) but may not have fewer side effects. Neurontin may be as  effective in some patients and is much cheaper.

It may reduce the levels of neurotransmitters that contribute to pain and ‘central sensitization’ in the disorders. It is one of the few drugs used successfully at times to treat multiple chemical sensitivity.  Neurontin was featured as a sleep drug in the IACFS/ME Treatment Primer.

Dr. Vinod Patel reported Neurontin was useful for neuropathic pain and to control myoclonic  jerks in his patients.

A 2011 Cochrane report of Neurontin’s effectiveness in chronic pain conditions including fibromyalgia stated neurontin would provide high levels of pain relief in about a third of patients who took it.

A 2011 Cochrane report stated that adverse events  (dizziness (21%), somnolence (16%), peripheral oedema (8%), and gait disturbance (9%)) were ‘frequent but mostly tolerable’ and that few serious side effects were seen. Neurontin should not be discontinued abruptly as it can trigger withdrawal symptoms similar to those found in benzodiazepine or alcohol withdrawal.

Researchers explore many uses for Neurontin