In the first of a series of articles by Phoenix Rising writers on the Institute for Neuro Immune Medicine’s Patient Conference at Nova Southeastern University, Vonnie Kennedy gives an overview of the morning session. 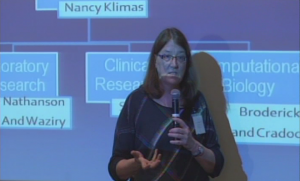 I was lucky enough to attend the morning session of the 2013 Chronic Fatigue Syndrome/Myalgic Encephalomyelitis and Gulf War Illness (ME/CFS and GWI) Patient Conference at NSU on Saturday, January 26.

The conference was a celebration of the February 12 opening of the Nova Southeastern University (NSU) College of Osteopathic Medicine’s (COM) Institute for Neuro Immune Medicine (INIM).

Nancy Klimas, M.D., Professor of Medicine, and Chair for Clinical Immunology, Director of the NSU-COM Institute for Neuro-Immune Medicine, and passionate host described the goals, mission, and structure of the organization. Over 250 people were physically present in the audience. Over 350 were online watching the live webcast.

Dr. Klimas, who has an established clinic and research site in Miami, was thrilled to declare the opening of the second site at the NSU Davie Campus. This state of the art facility will include research labs, clinics, and conference facilities. Its unique design will incorporate clinicians, educators, therapeutic modeling, and research experts under one roof creating a ‘one of a kind’ institute in the United States for treating patients with ME/CFS and GWI and other neuro immune conditions. The latest tools and technology for genomic practices for studies of neuroinflammatory and neurodegenerative disorders are also in place for diagnostics and treatment.


Voices of Hope: patients with stories of recovery

In this segment Dr. Klimas introduced three of Dr. Rey’s patients and asked each of them to share her/his story from discovery of the illness to each one’s improvement since the diagnosis.

Gail, a retired professor (age 67), noticed warning signs at age 60. She struggled with unusual tiredness, taking forever to get over a cold along with other symptoms until she found Dr. Irma Rey in 2010.

After blood work showed that she had little or no immune system, Dr. Rey started Gail on a series of supplements and medicines. Within a few months, Gail started feeling better, but unfortunately, decided to stop taking the regimen that Dr. Rey had prescribed and within weeks her symptoms returned. Gail, after following doctor’s orders once again, went back on the supplements and meds. That was 2 years ago, and today, Gail is feeling great.

Sue is a captain and pilot for American Airlines and currently on long-term disability. Sue came down with a never ending cold in 2007. Along with stress from her job, sleep deprivation and other malaise, Sue became progressively worse. With the help of Dr. Klimas, Sue has learned to monitor her mind and body and no longer pushes herself to do workouts that she once considered normal. She knows her limits and listens to her body.

While Sue can no longer be a pilot, she joked that the airline company was more than happy to provide her with long-term disability insurance to keep her out of the sky.

Dan, a retired advertising executive and an avid fisherman, caught the stomach flu in 2006 and was bedridden for days at a time. He would sometimes feel well enough to carry on a semi-normal day, but couldn’t resume fishing without severe consequences. Before agreeing to a clinical study in 2010, he would sometimes fall unconscious or be oblivious to his surroundings. The study called for changing his nutritional routine, which also resulted in a 16-pound weight loss. He has not had a ‘crash’ since and considers himself 80-85% back to normal.

Dan believes that limiting his physical activity and stress levels (he’s chosen yoga and meditation) is the answer for him. He also attributes much of his success to losing weight, giving up alcohol and drinking 98 ounces of water per day.

The Basics: treating ME/CFS and GWI

For example, some patients (such as the attendee sitting beside me) may pass out in the middle of an exercising routine while others tend to tolerate moderate workouts.

In many cases, patients respond positively to only an increased level of supplements and/or therapy while others may need to be treated with more aggressive measures. Dr. Rey stressed that patients are not alone and should seek the help of experts to determine how to correctly treat the illness. She also encouraged patients in the area to sign up for clinical research trials.


Understanding your limits: a key to restoring fitness

Connie Sol, MA Exercise Physiologist, gave an in-depth and highly scientific presentation about how the fitness equipment works at the facility. She reiterated that patients need to recognize their limits when exercising or doing any type of physical activity. She urged people with chronic illness to understand that pushing themselves physically is no longer the answer when struggling with chronic illness.

Dolores Perdome, Ph.D., LCSW discussed how vitally important it is for family and friends to support and encourage loved ones who are coping with chronic illness. Several people in the audience remarked about how family members sometimes “just don’t get it”. The institute offers counseling for partners and families.

Dr. Klimas concluded the morning session by answering questions and offering suggestions such as:

The theme of the conference “A Celebration of Hope and Progress” was clearly evident in the warm, caring enthusiasm of Dr. Klimas and her team. The excitement of the audience and staff was truly genuine. The opening of the new clinic and the mission to educate, advocate, and support patients and families promises to be a huge success.

Click here to find out more about the NSU-COM Institute for Neuro-Immune Medicine and/or to watch the video from the conference.

Vonnie Kennedy is a freelance writer based in Fort Lauderdale, Florida. She writes and blogs about women’s health and wellness.