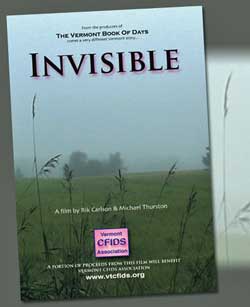 What is ME/CFS in Vermont like?’ Invisible’ suggests that it’s much like it is in the rest of US. A struggle for health and a struggle to maintain ones sense of mental well-being in the face of a medicals community’s disregard and often disdain. Vermont does have something or rather someone who is different, though, and that is Rik Carlson – someone who’s felt compelled to document the CFS Community’s story there. He did it first in his autobiography, Monkeys Have Wings and now he’s doing it on film.

The movie starts off with a solitary man walking a dog disappearing into a woods…a poignant image for a disorder which causes many people to disappear from work and from the community they used to frequent as they move deeper into the entangled and largely solitary woods that make up their world of CFS . Mostly isolated in their homes they become largely“Invisible”.

Michael Thurston, the producer (who bears an uncanny resemblance to Paul McCartney), noted that their method was simply to aim the camera and let people speak…. And so they did. The movie starts out with Julia Bond telling all too familiar story…..a young college student comes down with flu and never recovers ….and then comes the psychologist who was told, presumably by another psychologist, that she was simply depressed.

And there is always Rik, voluble, gesticulating, eyes widening – a natural on the camera. If you know his background – hardworking small- businessman – his story is eye-opening. Not everybody experiences those sudden shifts in health that change everything but many do and they are still head-turners after all these years. Lauren Hillenbrandt and Floyd Skloot poignantly described their experiences in their essays and now here is big Rik Carlson on camera …“It came out of nowhere, it was a thunderbolt…In a heartbeat I was so sick I couldn’t believe it”…Images of an athletic Lauren Hillenbrand suddenly rolling over in nausea in the car swept across my mind but what was really startling was happened next to this hard-driving entrepreneur …”I stopped everything…I didn’t turn the computer off , I put down my pencil and said “I’m going home”. When he got home he climbed into bed and “didn’t get out of it for years”.

Rik’s chief asset, his wife, described an active, witty man with an innate curiosity about the world who worked hard and when he came home was the house gourmet chef. A man who caught the computer bug early – who three years later could not figure out what 7+8 was. She bluntly noted “he was extremely remedial” and that “we worked very hard on his brain..every evening for a long time”. She knew Rik too well to accept his symptoms as anything other than what they were – evidence of a devastating illness….but he showed up quite different to a skeptical medical community.


Some of the most poignant parts of Invisible came for me when a former member of that community, Dr. Naumann, calmly described his transition from respected physician to medical outcast. At the time he became ill Naumann was the living the life….he was newly married with a child, he had the sailboat on the lake, he was doing what he loved, he and his wife had a rich social life – they were on the top of the heap and they knew it – (“we knew we were having just a superb life experience “ ) and he rated his quality of life at about a ‘10’. As many people know, success is no immunity against ME/CFS; this former ‘pillar of society’ is now in bed 17-18 hours out of every 24…..365 days a year and his quality of life is about a ‘4”.

No ‘Well Behaved Flu”! – Rik has written several times about the importance of accepting the life changes imposed by the illness. He noted -“ I always expected that…like any well-behaved flu – that this was going to go away…I’ll be able to go back work” and his eventual realization that that was not going to happen was an important turning point for him.

His wife said “I really think that the day he accepted that he wasn’t coming back right away he started to heal” and Rik agreed stating “I gave into it…I admitted that I’m going to be sick tomorrow and I’m going to be sick next week and there’s probably a pretty good chance next month and next year” and he motioned emphatically “It’s (that dream) is over!”…

Acceptance – He noted how that ‘accepting’ his illness defied the very fiber of his being as the prototypical self-reliant American male. Indeed, few would probably feel that kind of pick-you-up-by-your-bootstraps work your way out of any mess ethic more than Rik Carlson. He had after all built his own business from nothing and successfully steered it through thick and thin for decades.

In the end, though, he made an entirely pragmatic decision – He would not rue what he had lost or try to hang onto what he couldn’t have – he simply had to let it all go. His business – his life’s work was abandoned and he focused on healing and rest, rest, rest and experienced substantial healing.

The power of acceptance was echoed by a former psychologist who realized her inability to accept what this difficult illness had brought was driving a wedge between her and her husband. She realized that, like Rik, they needed to learn how to ‘cope’ effectively with their changed world. With her opportunities or ‘doing’ so truncated they had to learn how to focus on ‘being…. rather than doing together’. She and her husband managed to make it through the minefield that makes ME/CFS a dead zone for so many relationships.

One wonders if most primary relationships don’t undergo a period of agonizing reassessment as both partners struggle to adjust to their changed circumstances. In her essay Lauren Hillenbrand wrote of a summer of sometimes painful talks as the issues ME/CFS had brought to her relationship finally spilled out into the open. They were able to pass through the crucible and renew their relationships many other couples, of course, do not. One of the sadder moments of the film comes as a woman recounts how her sons and daughters initially shut her out.

Dealing with a sometimes indifferent or even hostile medical world, of course, often simply adds more layers of frustration or resentment to the equation. Dr. Naumann ruefully described his dismay, in the midst of his financial wreckage, at finding buried deeply in the passages of his medical plan wording that it did not cover chronic fatigue syndrome. 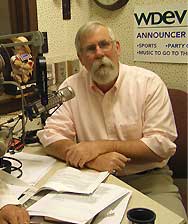 It goes on and on….. Rik’s story of his efforts to find one qualified physician in the major medical center in his area to serve the patients in his area is illuminating and disturbing. Dr. Friedman’s dour expression as he explains the lack o resources people with ME/CFS are faced worth is simply priceless.

“Invisible” is not Hollywood – the production values are good but not great but what stands out in the film are the compelling stories of normal people whose lives were suddenly turned upside down by something neither they nor the medical community could understand. ‘Invisible’ is a superb opportunity to acquaint people with the realities of ME/CFS on many levels.


In the film Rik notes  that he is walking more. He said he was diagnosed with a heart problem and told he had to exercise and as the film indicates he now walks 30 minutes a day. He said it was not easy…

I started walking regularly when we got the dog. It’s not easy, but to have a healthy heart I have to walk. These days it’s more of a trudge through the snow. I have various routes according to length and choose them accordingly

Are you able to slowly increase your walking time?

I am not increasing the walk but strive to do it every day. That’s the point. The doctor says my heart is doing well.

I also “work” three 3 hour shifts a week at a small Vermont country market. I do this at the expense of many other things, but there are great benefits in that I am in the “public” and not with the definition of a “sick” person. A friend saw me there and knew I was not well and asked how I was doing and I responded by saying “I have never been happier to be holding a broom.” It’s a simple thing but has given me back a life.

* Order Invisible
* Get Riks earlier Book on ME/CFS – We’re Not in Kansas Anymore: Chronic Fatigue Syndrome and the Politics of Disease
* Read an interview with Rik
* Get the Book AND the Video!