Simon McGrath on some important recent research into cognitive deficits in ME/CFS.

Brain fog is a major issue for ME/CFS patients, with 80-95% reporting memory or concentration problems. And while researchers have often found evidence of ‘cognitive deficits’ in laboratory testing, a surprising number of studies have failed to find deficits, leaving some to even speculate that patients’ cognitive problems are more perceived than real.

Clearing away the smoke

Such inconsistent findings are almost the norm for CFS research, with similarly mixed results in many areas including biomarkers. How do you make sense of it all?

Step forward Susan Cockshell, a new researcher only able to work on her PhD part-time, to clear away some of the smoke. A few years ago she published a large meta-analysis on cognitive problems in CFS. A search through a thousand possible studies was eventually narrowed down to fifty ‘good’ ones that between them had over 1,500 CFS patients and 1,500 controls. This was a major piece of work.

A meta-analysis looks at all the studies’ results as a whole, in a statistically robust way, to see if an overall effect emerges – and in this case it did. Cockshell, working with Professor Jane Mathias, found that there were substantial effects in attention, memory and Reaction Time. These fit with the memory and concentration problems reported by patients:

Reaction time isn’t just a measure of how fast you can move your muscles, but how quickly you can register information and THEN move. Think gunslingers at High Noon, who had to wait for the clock to strike before drawing (unless they cheated, of course). Susan Cockshell’s work suggests the slowdown in ME/CFS is with registering the information, not the muscle movement in response.

“This study provides objective evidence of cognitive deficits in persons with CFS, primarily in the domains of attention, memory and reaction time. In general, these deficits are consistent with those that are reported by patients… The deficits in performance are [substantial], which is likely to have an impact on day-to-day activities”

They also found issues with ‘motor functioning’, which is a measure of how quickly a muscle can respond to a command from the nervous system to move. However, verbal abilities, global functioning and cognitive flexibility and reasoning were normal, or only slightly affected, across many different studies.

A large study in 2010 backed this up by demonstrating that CFS patients have substantial problems with attention, reaction time and memory. This carefully controlled experiment, with over 300 CFS patients (Fukuda definition), also looked at the effect of mood and anxiety, which are more common in CFS patients and might explain the cognitive problems. However, it found that differences in the levels of anxiety and depression could not account for the difference in cognitive performance between patients and healthy controls.

Do the Stroop & other cognitive tests

The Stroop is a quirky test of attention, with a quirky name. The simplest way to see how it works is just to look at the two lists on the right. Don’t read them, instead say the color each word is displayed in, as quickly as you can. Not so easy… Try it online! 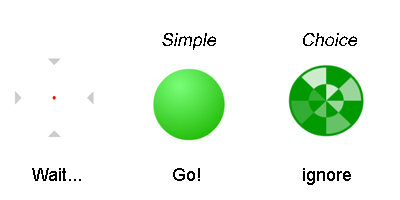 React to the green target in the Simple test. In the ‘Choice’ version, you are sometimes presented with a target you need to ignore, so you have to choose before reacting: Try it!

Tests memory, but sometimes considered an attention task too: easier to try than to explain. Try it!  More tests at the excellent Cognitive fun website

Instead, they found that the current level of  fatigue and total number of symptoms explained differences between patients and controls, just as expected. They also found that patients who reported more problems with minor cognitive tasks in the previous 6 months performed less well on tests than those reporting fewer problems. In other words, patients’ self-rating of cognitive difficulties matches performance in cognitive tests – indicating that the problem is not one of perception.

All of this backs up what patients have been saying for years. Except… these results are still not that clear cut. For instance, looking at fatigue in just the last 2 weeks, general fatigue scores correlated with cognitive performance, but mental fatigue did not, which is surprising. And while patients’ self-rating of cognitive problems matched performance on reaction times, they did not match performance on other tests, such as memory and attention.

Just when it looks sorted…

A new and very thorough paper from Susan Cockshell throws some more light on the situation, but some of its findings add to the confusion too.

The study does some really neat things. First it checked for subject effort, to tackle the criticism that patients’ poor performance might be because they weren’t really trying. Well over 90% of patients were shown to be giving full effort – the same proportion as healthy controls, and strong evidence against the ‘not trying hard enough’ view.  The few patients and controls that might not have been applying full effort were excluded from the study, leaving 50 in each group.

Like the 2010 study above, this new research controlled for psychological factors such as anxiety, and again showed that these factors made little difference to results. The new paper also confirmed the large difference in reaction time, with patients much slower than controls.

However, in some important ways the new study results conflict with earlier findings, e.g. no differences were found in either memory or concentration (though statistically, some studies will inevitably miss real effects by chance alone). For me, though, the most dramatic finding was that there was no correlation between patient-reported physical function or fatigue and cognitive performance, a very surprising result. New research from Susan Cockshell looks at this area in more detail, measuring fatigue after testing as well as before: the paper has been submitted but science publishing can move slowly so results may not appear for another 6 months.

However, quite often no substantial effects are found for memory, attention or motor functioning, and the correlation between patient-reported problems and test performance is surprisingly weak. Several things could explain this:

Clearly more work is needed to pin down the nature of cognitive problems in CFS, and the mismatch between reported problems and lab-based test results. Susan Cockshell notes that such differences are common in other illnesses too, such as stroke. In fact, her initial interest was in cognitive problems generally in illness, and she chose CFS specifically for her doctoral work as she thought this was an area where she could make a difference. She will be submitting her thesis soon and we can expect much more from this researcher in future.


Simon McGrath has a science degree, and has watched not much happening in ME/CFS research for a long time, but now thinks things are finally kicking off. He occasionally tweets on research: follow @pSimonMcGrath