It might not come as a huge surprise to patients, but a new study has found that mental fatigue can persist long after mental exertion is over.

Specifically, after a 3-hour session of cognitive testing of memory and attention, healthy controls took an average of 7 hours to recover, compared with 57 hours – more than two days – for CFS patients.

While one previous study found mental fatigue continues days after physical exertion, this appears to be the first research paper to demonstrate that mental exertion itself leads to prolonged mental fatigue.

To me, the large difference found between patients and controls makes this some of the most powerful evidence of the cognitive problems in ME/CFS.


Interestingly, this finding only came about thanks to the alertness of Susan Cockshell, the lead researcher who told me:

“I hadn’t originally planned to collect this data, but I had to follow up one of my first participants a few days after testing and she told me she was still fatigued.”

So, post-test mental fatigue was added to the measures.

Mental fatigue for both healthy controls and patients peaked several hours after testing (albeit at lower levels for controls), but 24 hours later, controls were back to pre-test levels while patients were not.

It’s hard to believe we’ve waited till now to even see testing of post-exertional mental fatigue. Cockshell commented that surprisingly little data existed in this area, but her study shows it is an issue that needs further investigation.

The main aim of the study was actually to see if patients’ reports of problems with mental tasks were backed up by objective test of cognitive function – specifically of memory and concentration, two distinctive problems with ME/CFS.

The result? There was no significant correlation between patient reports of fatigue and measured cognitive performance. But this doesn’t mean that patients don’t really have problems with mental tasks because, as Cockshell pointed out, there was also no correlation in healthy controls either (healthy controls reported some problems with memory and concentration too).

“There is little evidence for a relationship between subjective and objective measures of cognitive functioning for both people with CFS and healthy controls, which suggests that they may be capturing different constructs.”

In fact, a lot of evidence now shows that people’s self-reported cognitive problems aren’t matched by the kind of objective tests used in these studies, which does beg the question: Do we need better tests of cognitive problems in the real world? 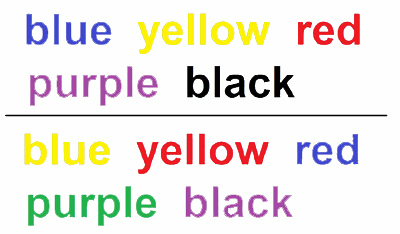 To understand this issue better, let’s take the example of concentration, which in the real world means problems such as focusing on reading or blocking out background noise. One measure of concentration (or ‘attention’ in the jargon) is the “Stroop” – a quirky test with a quirky name.

The simplest way to see how it works is just to look at the two lists on the left. Don’t read them, instead say the colour each word is displayed in, as quickly as you can. Not so easy, but try it online!

Of course, we never have to do tasks like this in real life (and most other cognitive tests are similarly contrived), so is this a meaningful way to measure patients’ problems?


One researcher and clinician, Gudron Lange, has highlighted how everyday tasks, such as going shopping, involve multi-tasking, something that most cognitive tests miss.

Lange has suggested using cognitive tests that include multi-tasking – and virtual reality now provides a way to test real-life scenarios using multi-tasking in the lab.

Cockshell agrees that more work is needed in this area:

“I think a better understanding of the cognitive problems occurring in the real world is required … but that’s a whole other area of research.”

Some researchers have argued that the problem in CFS isn’t that patients can’t do much or perform well, but that they simply underestimate how much they actually do, almost seeing CFS as a delusion syndrome. But this new study, like several others, found that the theory doesn’t hold up:

“Self-reported problems were not due to people with CFS overestimating their problems, as they were able to accurately evaluate their performance on most cognitive tests.”

In fact, patients were at least as good as controls at judging their own performance.

These clear findings of extended fatigue after the testing fit with an earlier fMRI study (also by Lange), indicating that CFS patients had to use more brain areas to achieve the same results as healthy controls. As Cockshell says:

“People with CFS may perform comparably to their peers by expending additional cognitive effort, and this may subsequently impact on their levels of fatigue.”

This paper provides powerful new evidence of the problems faced by patients with our condition. Yet the mismatch between reported issues and objective performance suggests there we still haven’t found the best way to measure the very real problems experienced by ME/CFS.

Hopefully, this will soon change.

Susan Cockshell will be speaking about her work at the IACFS Conference on Sunday 23.3.14. Read more: Brain Fog: The research.