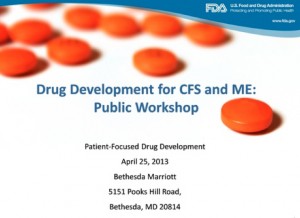 The FDA Drug Development Workshop for chronic fatigue syndrome (CFS) and myalgic encephalomyelitis (ME) took place last week on the 25th and 26th of April. It was well attended by patients, advocates, doctors, representatives of the CDC and even a few pharmaceutical reps.

The workshop was also broadcast live over the internet, enabling many more people to follow what happened without being there in person. This meeting was an opportunity for us to be heard, and continues to be an opportunity as comments can still be added to the docket until August 2nd 2013.

For those interested in a summary, this will be the first of several articles which attempt to summarize 85,000 words of talk over two days into only a few thousand words. At the bottom of each article is a link to the video recordings on the FDA site, as well as a transcript of the video discussed in the article. At the top of each transcript, we have added a list of who talks in that video along with timestamps of when they talked, and timestamps are given throughout this article as well for your reference. This will allow you to skip ahead to the part of a video which interests you the most, in case you don’t fancy catching up on two full days of talking from start to finish. We hope this will be a useful resource for readers!

Day one of the workshop was divided into the following four segments, the first two of which are covered in this first article. The third and fourth segments of day one will be covered by a subsequent article.

As the FDA meeting started in the afternoon on the first day, Dr Peterson very intelligently arranged a meeting titled “Scientifically Redefining CFS/ME”, taking place before the FDA-workshop began. This meeting was well-attended, with Dr. Enlander, Dr. Nancy Klimas, and others participating. The content of that meeting is not specifically discussed in this article, but if was nice to see our ME/CFS researchers making the most of the opportunity.


Day one, part one: An overview of FDA’s Patient-Focused Drug Development Initiative [video one] [transcript]

It appears from the opening presentation that the FDA was genuinely engaged and they seemed to understand that the illness is very serious and debilitating. They said that they wanted to listen to the patients and careers present, and learn from the researchers and clinicians already involved in the disease.

“…Our goal is to move forward,” said Admiral Sandra Kweder, Deputy Director in the Office of Planning and Informatics at the FDA, in her opening presentation. A good start, because patients are keener than anyone to move forward, and we have waited a long time to be heard.

Next, Theresa Mullin, Director, Office of Planning and Informatics, FDA [timestamp:13:50] talked about ‘Patient-focused Drug Development’, describing it as “an opportunity for patients to talk, and frankly, for everyone else to listen.” She said that this was the first time this initiative was being put in progress to get direct input from patients to help in FDA decision making, and “an important adjunct to our benefit/risk framework.”

She then went on to explain that as part of this framework, they want to gain insight into the clinical perspective of patients and caregivers, with a strong emphasis on the patient’s willingness to accept risk in treatment. This seems to be the most significant of several factors that the FDA is considering alongside questions about the severity of illness, degree of unmet need, clinical trial data, risk and safety. This change alone could signal a real and significant opportunity.

Earlier this year Ampligen was rejected, despite the fact that patients explained their willingness to take risks with treatments to have a chance at recovery. The importance of this new framework is that it is not drug specific, where such evidence from patients and clinicians is treated with some caution as it is more open to influence by people with vested interests.

What this new framework will do, by not being drug-specific, is set an unbiased target for every drug application for ME and CFS, and if we tell the FDA that we have no good treatments currently, are seriously debilitated and are willing to accept risk in taking a drug where safety data might be sketchy, the chances of a drug like Ampligen getting approved would probably be greater than before.

Something else that the FDA (and us) are hoping will come out of this new initiative, is better end-point measures for drug trials.

After this introduction, the microphone was passed to Sara Eggers, PhD. Office of Planning and Informatics, FDA [timestamp: 24:30], who explained the format of the discussions that would take place next. This isn’t terribly exciting, so you may want to skip it. It runs to the end of the first video.

Day One, Part Two: Disease Symptoms and Daily Impacts That Matter Most to Patients [video two][transcript]

After a break, the workshop was reconvened with a panel of patients and representatives reporting on Disease Symptoms and Daily Impacts That Matter Most to Patients


There are two questions that they were asked to comment on:

Jon describes himself as being able to work during the week, with limitations, and then crashing each weekend at home. “I’m here to speak for the thousands of people with CFS who are able to work, but struggle to make it through each day and each week,” he said.  He spends Saturdays and Sundays in bed in order to be able to return to work on Monday.

The greatest toll is on his family because he can’t attend to his children and to social events. He explains “I don’t know if I can convey the psychological distress I feel when I’m unable to spend time with my daughters, or participate in family activities.”

He struggles with the fact that family and friends can’t understand how he can feel so sick at home when he’s able to work and hold a job.

Joseph used to be a military linguist and now he can’t finish his thesis.  This is his seventh year into a two year master’s program. He used to do translations in complicated languages like Arabic. At times, multiple translations at once while listening in on each ear. Today, he can be writing down something and when he reads it back the next day, he doesn’t comprehend it.  He questions then whether he was confused when he wrote it or is it that he is totally confused while reading it back? “In a sense it doesn’t matter,” he says. “The previous day’s work is probably wasted.”

Denise’s sons were 12 and 15 when they first got ill.  They were athletic and very active academically and socially, with a full schedule. Today, they are both housebound. “Because they require 24/7 care,” Denise states, “I’m nearly as housebound as they are.”  Their most problematic symptom is their impaired executive functioning and slow processing speed.  Not only are they impaired cognitively, but when trying to concentrate for more than 20 minutes, they will collapse for weeks (PEM/PENE). Because of this, they cannot study without functional collapse.

Kim responded based on a survey of 1,300 patients.

Answering the question of what has had the most ‘impact on daily life’:

She used to work as a lawyer and is now unemployed and housebound. Her most troublesome symptom is her neurological and cognitive deficits. She cannot concentrate and has trouble understanding. Her IQ has been reduced to 107. She also has great sensitivity to light (was wearing sunglasses indoors) as well as to sound. “I can’t focus with much visual stimulation, for example: too many objects in a store, music in a restaurant or a busy website.”

Patients replied with the following difficulties:

Sara suggested that this mental confusion must be causing anxiety? I loved Joan’s reply: No, it does not cause anxiety. It causes fear. The difference between anxiety and fear is that anxiety is a worry about something that might happen. Whereas fear is worry about something one knows will happen.

The following were mentioned regarding crashes:

Links to Videos and Transcripts

Day 1, Part 1: An Introduction from the FDA   Video  Transcript

Coming soon: In the next article in this series, we’ll review the third video, covering the third and fourth sessions from day one of the workshop.

Joel was diagnosed with ME/CFS in 2009 but struggled with the illness for some time prior to this. He loves to write, and hopes to regain enough health to return to the career he loved and have his work published.

Gabby is a patient with ME/CFS – disabled since 2003.  She is passionate about raising awareness of the plight of severe sufferers of this disease.