Gabby (Nielk)  pays her respects to fellow ME patient and staunch advocate Thomas Hennessy Jr. who died earlier this month. Rest in Peace at last, Thomas.

A little over a week ago, on September 9th, the international Neuroimmune Disease (NEID) community was shaken by the news that well known and warmly respected patient advocate Thomas Hennessy Jr. had died.

“A former advertising executive with a knack for a bold phrase,” Tom had kindly granted Phoenix Rising an in-depth interview that we featured again last year, called, “Fierce Advocacy”. He revealed a lot about his inner determination and previous efforts to fight for awareness and recognition of these serious diseases; showing us how committed he was to ensuring changes were made for the better.

Despite his own personal battle with both ME and Lyme for 25 years, Tom became known as someone willing to speak his mind and who had access to the right ears. In the minds of many, he proved to be a patient-advocate-extraordinaire and will be very much missed by our patient community, his family and friends.

I did not know him personally, but our paths crossed two years ago when I became involved in raising awareness for May 12th and was helping a friend with images for her “ME Awareness: Words and Pictures” Facebook page. I found Tom to be a true inspiration and my greatest source of encouragement: a real motivator.


He was devoted to the cause and determined to make a difference in the lives of those who suffer the most.  It is surreal how such an outspoken and dedicated voice has been prematurely extinguished.  Thomas, you will not be forgotten.

Founder of the “May 12th” international movement

He will perhaps most warmly be remembered for the founding of May 12th Awareness Day, which has become a truly international event for our community. Asked about it’s origins, Thomas said:

“I started the concept of Lobby day back in 1988, when I tried to convince Barry Sleight and his wife, Michelle Freeman, to join me and enlist my father, the top Lobbyist for J. Paul Getty in Washington D.C., to work for FREE on our behalf to get Congress involved.” 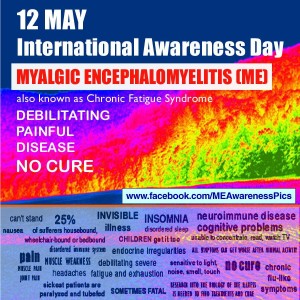 One reason for raising awareness and keeping up the political pressure was clearly at the front of his mind, as was the dire alternative:

“One stroke of the congressional pen could get us millions of dollars for funding…or get us stricken from getting any funds for research at NIH.”

Why, you might ask, was May 12th chosen as a date? It was to memorialize the birth date of Florence Nightingale, the English army nurse who inspired the founding of the International Red Cross, and who was believed to, “have contracted a paralyzing, CIND-like illness in her mid-thirties and spent the last 50 years of her life virtually bedridden.”

In 1992, Tom also founded the organization RESCIND (Repeal Existing Stereotypes for Chronic Immunological and Neurological Disorders), its intention was to be a virtual non-profit organization, and it aimed to be a website full of information for people who could not leave their home. He said then of May 12th that:

“We would all agree to come together at least ONE day a year for May 12th to Lobby Congress and get the word out to the media that these CIND (Chronic Immunological and Neurological Diseases) were costing our economy tens of billions in lost productivity and billions in medical costs.”

Unfortunately, the RESCIND website has had to close due to lack of funding support.

Tom deplored the name “Chronic Fatigue Syndrome” and, some 24 years ago, in the first formal meeting called to discuss a name-change, he declared:

“There are hundreds of thousands if not millions of Americans and millions more worldwide who are left destitute by these terrible diseases. But you will never get the respect, the research dollars, and the acceptance of your peers until you change this asinine name. We are tired of being sick, not sick of being tired. And if you do nothing else today, change the God damn name!”


He later said of that testimony:

“I explained to that audience back in April 1989, that IF they didn’t change the name that very day, and nip this problem in the bud, it would cause a mess for decades and it has.”

How right he was!

In 2011, Tom also revealed how passionate were his feeling towards the adoption of a better definition for the illness he preferred be named as Myalgic Encephalomyelitis:

“…we need to adopt the Canadian Consensus Definition, by Carruthers et al. TODAY and scrap every other definition in use anywhere in the world. Period! Go with the name Myalgic Encephalomyelitis, which is not a perfect name, but it describes a CIND (Chronic Immunological and Neurological Disease) which has had a WHO classification for 40 years. The Canadian Consensus Definition must be adopted worldwide immediately. All other definitions and names need to become moot-immediately.”

Those outside the U.S. may dial in through their computer through the Internet using the Flashphone here. You can also view the details and join the discussion on the phone-in Facebook page here.

“ME Awareness: Words and Pictures”

“Tom brought his marketing and public relations talents to the advocacy of neuro-endocrine-immune diseases,” said Lori Chapo-Kroger, RN, PANDORA Org President.  “His concept of a lobby and awareness day for these illnesses is now commonly observed by patient advocacy organizations around the world, including our organization.

Tom was one of the firsts, before most scientists, to recognize that Gulf War Illness is similar to ME/CFS. Because of the similarities among the diseases, the necessity to reduce misconceptions, and the call for a stronger activism voice, Tom conceived of advocating for all of these illnesses together, along with fibromyalgia, environmental illness and chronic tick-borne infections. He suffered from quite a few of these ailments for many years.”

Rest in peace at last, Thomas.

History of May 12th Awareness Day