Jody Smith considers how her life had become one of necessary isolation, and how a chance encounter with new neighbours and the possibility of having them in her home, led to feelings of fear and insecurity. Looking back she reflects on how these concerns have slowly improved and how the occasional visitor is now more welcome… 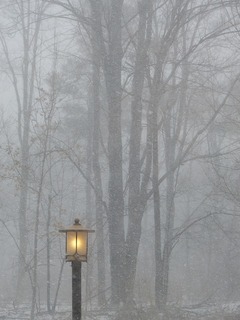 I live in a cul-de-sac that contains half a dozen houses. And, as I think about it, living on a cul-de-sac – or dead-end street – strikes my twisted sense of humour as being a great, though unintended, picture for living with ME/CFS.

Its after dark, and through my living room window, I see the headlights of any cars driving in or out. There’s only one street light on this short street, so headlights are very noticeable against the black background.

A couple of houses launch and receive vehicles all day long — at least according to my ME/CFS standards. One house in particular has plenty of traffic, as members of the family are carried to and from activities every day.

This house is across the street from me, and its’ traffic is a reminder of what a normal busy household is like. It prompts feelings of yearning and loss in me.


It’s not that I want to be that busy, I know I wouldn’t be able to maintain such a pace for more than a couple of days before being relegated to my bed. And it’s not that I resent their apparent happiness and constant movement. But I do envy it. And it does make me sad to see it from the vantage point of my quiet living room.

I remember years when my household was crazy busy, when our kids were coming and going day and night, when my husband and I would round the crew up and take off to church, to grandma’s house, to homeschool events where we would lead the proceedings.

I remember when our friends and our kids’ friends would show up regularly, sometimes by appointment, and sometimes they’d just drop in. And we would be at times happy to see them, other times wishing they’d chosen a different time because we were busy. But always we felt more than adequate to these visits.

The house might not be tidy with five kids running in all directions, and we lived with plenty of chaos. But the fact of someone showing up at the door was a normal part of life and we were happy to roll with it.

Last year I was reminded of just how much this had vanished from my life.

We had become owners and caretakers of a rescued three-legged dog from the Humane Society. She had briefly been our adult son’s dog, but he’d found that he was not able to provide the constant companionship this anxious traumatized dog needed. And so Cleo came to live with us.

With two of us living with ME/CFS, and one who had Fibromyalgia, there was always at least one of us at home at any given time. The dearth of visitors also helped her to eventually become more relaxed. Surprises just didn’t happen very often. Our days had a sameness that sometimes drove me out of my mind, but it worked really well for Cleo.

I didn’t know how to take care of a dog, or how to get Cleo to listen to me, and she didn’t seem to have much practice at listening to anyone. She was a good-sized dog, probably a Lab and German Shepherd mix, so we couldn’t exactly pick her up and move her when she didn’t respond.

So when she went outside one day and trotted over to the neighour’s house to bark at them in their yard and ignored my “commands” to come home, I was mortified, embarrassed and, I realized later, terrified.

I knew that in my past, I would have been more than equal to the situation. I would have laughed, and my neighbours would have commiserated. They were dog lovers so there should have been no problem. But these were new neighbours, and I had had no recent experience with meeting anyone this close to home.

I was proficient online where most of my life has been happening for the past four years, but the very thought of a new neighbour – and one that might possibly pop over to my house – put me into a deep sweat.


I felt certain that they were pleasant, friendly people and not the type to come in and look for flaws, and yet I was afraid that the holes in my life would be all too obvious, and that these normal people would be able to sniff out the fact that we had pieces missing.

Suddenly, I was in this state of irrational anxiety. Would my home be deemed good enough (whatever that meant)? Would they feel comfortable here? Would I remember what to do with a guest? Would I feel ashamed of my cluttered house – that my carpets hadn’t been vacuumed in months because nobody had either the energy or the healthy muscles to clean them? Would the messy kitchen turn them off? Should it? In short – would they want to back out and steer clear of this house of infirmity?

These concerns were so different compared to when I used to have moms and home-schooled kids over to my place for hot dogs every week, and held meetings and get-togethers in my living room.

The sameness of my small life has suited me in many ways for these many years. I have needed it, needed to avoid stress, avoid surprises, avoid exertion. I had gotten used to it. But on that day, thoughts about my new neighbours, really unearthed this fear in me; I got a clearer look at just how small and uneventful my world was. And it broke my heart.

Fortunately I did not stay in that state. As the rude shock wore off, and as I spent time thinking about this state of affairs over the following weeks and months, I found that I was more inclined to move the clutter off my tables, and to keep dishes more under control.

I would remind myself that if someone dropped by I would be more at ease if the place looked ready for such events. I didn’t have company, but I used the thought that I might, to help keep the household more like I used to back in the days before I become ill.

A year later, for no specific reason I can think of, the occasional visitor has been showing up here, for the first time in about five years or more. One is a friend of mine, another is my husband’s friend. The earlier revelation with our new neighbours had started my rusted cogs moving, and by the time we did have drop-ins I had moved from the cluttered hermit-hood to a status quo that was more like how I used to live.

I still miss the old barrel-of-monkeys level of activity in my home that we had before ME/CFS. I still would not be able to maintain such a pace if it were to hit me again. But one more piece of my old self has been slowly re-surfacing, as I continue to try to reconstruct my decimated life.

I am again surprised by how slow and how enormous the rebuilding and reclaiming process can be. I shouldn’t be surprised, because I have been experiencing such tiny resurgences for many years now. But even though it’s slow, and the progress infinitesimal, I am continuing to crawl, with the speed of a glacier but in the right direction at least, to a state that someday may feel something akin to normal once again.