Jody Smith relates how tiny victories helped her regain a life despite her limitations. 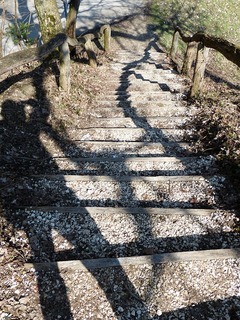 What is it about situations that are unfamiliar that make our brains feel lumpy and our bodies feel like they are moving (or trying to) in another dimension?

When I was at my sickest with ME/CFS, this wasn’t much of a problem, because I was spending most of my time hugging my bed, trying not to fall off the world. When I got a bit healthier, the unfamiliar began to present a new kind of problem, needing new strategies to be worked out for daily survival.

For instance, when I was once again able to dress myself and venture outside of my house, stepping out of the front door was just the first of a series of overwhelming challenges. That year, my goal was to try to go back into the little library of my town.

The last time I’d been in there, I experienced an ME/CFS crash. At that time, I had no idea how to handle such a thing. I’d gone down the stairs to the children’s section with my five kids, ages four to twelve. They were browsing through books, and I was, suddenly, trying not to fall down.

I gave them a few minutes to find books, trying to breathe without my heart exploding, and staggered out of there with kids and books in tow. We went home, and I collapsed on the couch for hours.


I didn’t try to go back for several years.

By the time I tried another foray to the library, I had learned a few things. My husband Alan drove me there, and waited in the car for me. I held onto the railing, and dragged myself up the stairs into the building. I walked very slowly, and fumbled my way through a few of the rows of shelves.

I didn’t even try to look at book titles. The goal was simply to walk in and walk out under my own steam. The floor felt unstable under my feet, and the walls and bookshelves seemed to move in on me. By the time I was heading back out the door, my vision was fractured, my face and arms were numb and tingling, and my feet were shuffling as I hoped they knew where they were going.

Back in the car, I closed my eyes and melted into the seat, while Alan drove me home and saw me off to bed for the rest of the day.

But I’d done it. And the next week I did it again. On my next trip, I took out a book. Al carried it for me, and helped me down the library stairs. I felt like a hero.

The thing that “normal” people don’t get, is that none of this hallucinatory weirdness was from shyness or deep-seated aversion to this library. This had been my favorite place when I was a child, and it was still a place I loved.

I wasn’t afraid of the people. The librarians were friendly and helpful and would have done anything I asked. For example, when I couldn’t fill out my new library card because of tendinitis, the librarian filled out everything but my signature. She was kind to someone who seemed fragile, as I knew she would be.

It’s not agoraphobia – more like vertigo. It’s not anxiety. It’s full-blown paresthesia, POTS, orthostatic intolerance, and who knows what else. There is no element of psychological or emotional ambivalence.

I don’t know what the physiological dynamics are, but I do know they are physiological. I was a very outgoing, sociable person who had gotten used to being in charge when needed, and who also enjoyed sitting back and watching other people shine. I had led a county-wide homeschooling association, ran departments in my church, and had a life that was branching out in many directions.

That person went into stasis when my body stopped cooperating, but she wasn’t gone. I didn’t become someone else. My mainframe simply couldn’t support the kind of activity it used to in the past.

So I learned how to live the half-life. By this I do not mean “half-life” according to the medical or scientific definition. I just mean … it’s not a whole life. But I can’t let the fact that it isn’t whole stop me from going for it whenever and however I can.


People, at times, may think they are looking at someone who is timid and a little slow, but that’s not the way it is. Instead, what they’re seeing is someone who is determined to take as many tiny steps at whatever rate will keep me within my safe parameters.

They’re seeing someone who is intent on regaining as much of her life as is possible. And if it has to be done slowly with long breaks between steps, if she has to “deja vu” the steps until they are so familiar she could do them in her sleep, then so be it.

All of us move at a different pace. Sometimes the pace can be so slow as to seem like nothing is happening at all. But that doesn’t make the victories any less significant, in fact they may be more stellar when they are at this basic survival level.

Our short-term goals are all highly individualistic. One person with ME/CFS might be thrilled at getting dressed before bedtime. Another might be able to spend a day with their kids. I have achieved these particular goals more times than I can count, what with crashes and setbacks.

I have been lucky enough to be able to move on to bigger goals – taking on new freelance work, going to visit a friend for the afternoon, having company for the weekend… Last weekend, I was able to be present for my daughter’s wedding and reception, with nary a crash before, during or afterward.

It would be nice to be able to assume from this progress that things will just escalate to bigger and better victories. Of course you and I know that there are no guarantees.

I do know, though, that whatever state I find myself in, living the half-life is still the way to go. It is the way to re-stabilize, to gain more energy, and to step into new things. As long as I do it by slowly and repeatedly making the unfamiliar more familiar. Because for some reason, the unfamiliar throws my body and brain into a tailspin.

How do you handle the half-life that is ME/CFS?