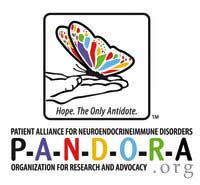 When I finally got what the Chase Community Giving Contest really is it made my jaw drop. What it is is easy money for non-profits – and lots of it – and in these difficult economic times that’s a godsend for nonprofits.

The contest is a chance for people to show their love for a CFS nonprofit and we’re concentrating on PANDORA here. Why should you show your love for PANDORA, in particular? Because it’s leader, Marly Silverman, is a small woman with big goals – with WPI-like goals. She tried to get a Center of Excellence built with Dr. Klimas at the head in Miami. When the Univ. of Miami bowed out and she found more fertile ground in New Jersey she moved the battle up there. Over the past couple of years she gotten the support of key state legislators and support groups to build a Neuroendocrineimmune Center there. Just this month the legislature passed a resolution supporting their efforts.

Now it’s crunch time – time to raise money – and the Facebook Chase Contest gives us a chance to give PANDORA a huge boost as Marly and others fanout to raise money (alot of money). Marly’s not trying to build a little clinic here. She wants to build a Whittemore Peterson Institute type Center. We’re talking about an Institute that has the ability to make waves. (Once she figures out how to do it in New Jersey she wants to build one in Florida as well….)

Chase’s Community Giving project can give PANDORA the resources they need to really engage in the fight; it might very well be the seed money that makes this project possible.


What do you need to do to help PANDORA? The great things is how easy it is. All you need is a Facebook account.

Help Pandora get the money they need to build the first NEID Center in the US.

PANDORA started out in the 60’s has moved steadily upwards and its now at 42. We need to keep it in the top fifty and hopefully move it up into the 20’s and then make a dash for the top five. We’re keep track of PANDORA’s progress in a box on the right hand side of the Forums.