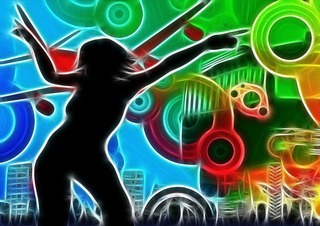 I knew I was coming back a bit to the land of the living after several years’ exile when I was able to go online again. Getting onto Facebook and learning my way around was quite a coup.

It was a ridiculously challenging and exhausting ordeal. What should have only taken days, instead took a few weeks. And even once I knew what I was doing, I would find myself frazzled and sweating as I’d write a few status updates and replies to friends.

Just to be able to say to myself “I have friends,” was a novelty that got endorphins moving which had seemingly forgotten how to move for years. True, I never saw any of these friends. But I hadn’t seen any in my town for so long that knowing I had friends across the country or around the world was such a step forward, it left me breathless and in tears at times.

That autumn, my friend Lisa, who also had ME/CFS and who lived in a tent on the West coast, took a foray onto a Facebook game, and sent me an invitation. It was a slow paced little game, which meant it was just a bit too demanding for me, neurologically speaking.


But I found that it was a great reprieve after writing articles and living on Phoenix Rising’s forums at the time. And I could click on my little crops and trees at the slow pace I needed to creep along at. If I had to close my eyes, or go to bed, or step away from the computer because I felt like I was going to crash, I could do that, and I did. Often.

A year earlier, I would not have been able to play this game. And, of course, at that time I also did not have a friend who would have invited me. So the reward systems in my brain were getting dusted off, and like the rusty old tin man, being slowly oiled and regaining some mobility once more.

A few months later, I moved on to another Facebook game, this time inviting Lisa to join me there, and I talked my husband into playing as well. This game had a faster pace, and involved cooking and serving food to little cartoon people.

It’s funny. I really was never very big on games before. And even now, while I play a game or two most days for awhile, I feel a bit embarrassed, and I feel a crazy grin on my face sometimes as I become aware of what I’m doing.

I read somewhere that the reward centers of the brains of the chronically ill are depleted. Sorry, I don’t remember where that comes from (thank my ME/CFS brain for that), nor do I remember anything else from that article. But, I have thought about this notion quite a bit, and have concluded that there are very serious reasons some of us play games online – and it ain’t just boredom.

When you are incapacitated and have skinny support systems, you can bet the reward centers in your brain are not getting much action. And for those of us with a little brain power and the ability to tap a keyboard, computer games may be the only way any of these nurturing brain chemicals will be triggered.

So prime that pump. Go grow some lettuce on your pretend farm, and feel the satisfaction of harvesting and selling your crops.

Serve up meals in your pretend cafe, and enjoy feeding all those cartoons breakfast, lunch and dinner. It somehow helps to make up for the fact that most days all you can do is nuke a bowl of soup for yourself.

Watch your cash mount up in these games, even while you have no way of making money in the real world and can’t pay your bills, and enjoy at least part of your brain feeling flush and well-padded.

Your brain knows this stuff isn’t real, but in some ways it must be perceived as real because it feels good. It is reassuring to take on a little virtual challenge and … succeed. The first few times I did this, it would leave me hyperventilating and … afraid. Yep, I would feel afraid – the stress response kicked in big-time.


I was so used to not being able to make things happen, so used to things not coming to completion, so used to not having any success … I almost couldn’t believe it could happen in this little game. But it did. And the way it made me feel makes me suspect that maybe somehow there was some rerouting going on in my brain. And it was important.

I still think playing games is silly, but I still do it. And I am serious about it. I am pumping out as many positive chemicals as I can.

I don’t know what they are, and I don’t know how it works. I just know that the dry desert of my sense of satisfaction and pleasure about making things happen has been watered by these pastimes, and I need all the watering I can get. You’ll have to excuse me, it’s time to tend my crops.