The first in a new series of (mercifully) short pieces on recent research. By Simon McGrath

A new study used data from the large PACE Trial to see if CBT and Graded exercise (GET) improved ME/CFS pain. (The main trial itself found a moderate effect of CBT and GET on self-reported fatigue and function.) The study looked at muscle and joint pain frequency, and fibromyalgia status. And it compared CBT and GET to both specialised medical care (SMC) and APT (pseudo-pacing).

The questions are, did CBT or GET have any effect on these – and if so, how big was the effect? The answers were unimpressive:

What does a ‘small’ effect mean?

How small is small? For muscle and joint pain, the study used ‘Cohen’s d‘ to measure the effect of the treatments, and the values ranged from 0.24 to 0.31. Generally, 0.2 is considered a small effect, 0.5 is moderate and 0.8 is large (over 1 is very large), but the best way to gauge size is to look at a graph of the data for control vs treatment. The graph below shows an effect size of 0.27, typical in this study. The control group is in red, the treatment group – showing a small improvement effect (lower score) – is in black. The shaded pink area shows the overlap between the two groups. As you can see, there is a definite treatment effect overall, but it’s rather a small one. 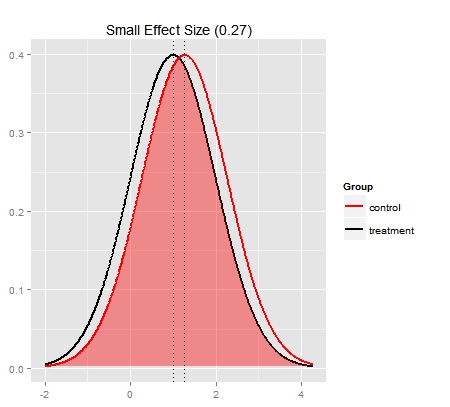 The effect on Fibromyalgia status needs to be measured slightly differently, so the authors used the “Number Needed to Treat” measure. On average, 12 patients need to be treated with GET for one patient to no longer meet the criteria for fibromyalgia.  This too is a small effect (note it may be a case of moving from ‘just meeting’ the criteria, to ‘just not meeting criteria’, rather than recovery).


No evidence on effect on pain severity

Disappointingly, the study only measured pain frequency, not pain severity, with the authors acknowledging this approach “may not be as clinically meaningful” as using both pain frequency and severity. Many patients with severe pain would agree. Note that as this was an outpatient study, the severely affected – who often have the worst pain – were excluded.

Treatment effects on pain were independent of ‘change in fatigue’.

You might expect that if CBT and graded exercise helped patients recover then symptoms would improve across the board. But surprisingly, the study found that gains in pain were not linked to improvements in fatigue.

CBT and Graded Exercise had a small or insignificant effect on muscle and joint pain frequency, and Fibromyalgia in the PACE Trial. There was no evidence on the ability of CBT and Graded exercise to reduce pain severity.

Read more on the Phoenix Rising thread about this study

This article first appeared on the ME Association’s website