Gabby (Nielk) presents a nightmare vision of what the future might hold for ME/CFS patients in the US, if the Institute of Medicine (IOM) contract to redefine ME/CFS turns out as badly as many patients and advocates fear. 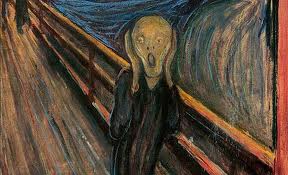 Imagine that you magically wake up to a day in October of 2015.  Unfortunately you are still ill with ME/CFS and it’s just another ordinary day of suffering for you.  As usual, you log on to your computer with your favorite drink in hand.  You start becoming edgy because you can’t seem to find your usual sites.  You don’t see any mention of Myalgic Encephalomyelitis (ME) nor Chronic Fatigue Syndrome (CFS).  Could it be that someone hacked into your computer and deleted all your favorite sites?  Instead you see the name Chronic Multisymptom Illness (CMI) popping up all over.  You feel real confused: isn’t that the name they gave to Gulf War Illness? What happened to ME/CFS?  Where are the ’advocacy calls to action’ to stop the IOM contract?

You have an appointment with your doctor today.  He greets you with a weird grin on his face.  “Ms/Mr……, do you need me to adjust your antidepressant dosage again?”  You ask him “what antidepressant?”  He says “The one we started you on based on the new HHS booklet:  ‘Treatment Guide: Chronic Multisystem Illness – for clinicians’.”  You rub your eyes and start becoming real irritated.  The doctor rolls his eyes and says, “I see you have not followed up with your cognitive behavioral therapist!  How do you expect to ever improve if you don’t follow up with the doctor’s orders?  Are you keeping up with your GET exercises as instructed?  Well, we will have to continue discussing this at your next appointment because your allotted 6 minutes are up”.

Your headache level has just gone up a few notches.  As usual after the physical exertion of a doctor’s visit, you start feeling like your body is made out of lead and you can hardly drag your feet home.  As you step through the door, you pick up your day’s mail.  You see a letter from Social Security Administration.  You are anxious to open it up.  “It is probably my disability check that is due”, you are thinking.  Instead, you find a ‘determination’ letter informing you that they have cancelled your disability benefits due to the fact that  ‘mental health disorders’ are only covered for a maximum of two years.

Because you have become so weak from going out of the house,  you can hardly crawl back into bed.  You call your family member/friend and cry to them about what is happening to you.  You are greeted by a long silence.  You get really scared now, what’s going on here?  They patiently explain to you that this is all expected now and is all due to the ‘redefinition’ of the illness by the honorable, respected Institute of Medicine (IOM).  Six months ago, the Institute of Medicine – who were commissioned by HHS to redefine ME/CFS – delivered their new, improved definition and diagnostic criteria.  In order to be diagnosed with the illness now, all you need is four out of a list of 18 possible symptoms.  They have renamed it – ‘Chronic Multisymptom Illness’ – and have classified it as a ‘mental health disorder’.  It is considered a state of ‘unwellness’ where patients have some vague sort of combination of complaints.  It is mostly due to stress and mental fatigue, most likely due to some type of child abuse and/or PTSD.  There is really not much that society can do except keep patients as comfortable as possible with antidepressants and with cognitive behavioral therapy.  To keep them in good shape, all forms of exercise are encouraged.


“This must be a nightmare”, you are thinking.  How could this have happened?  HHS promised that they would work in tandem with IOM to come up with appropriate diagnostic criteria based on scientific studies and findings.  You know that there are studies out that show biological abnormalities such as low natural killer cells, high viral titers, abnormalities in two day exercise testing and more.  You certainly remember that 35 expert clinicians and researchers were trying to fight this and signed an open letter to HHS to cancel the IOM contract and adopt the Canadian Consensus Criteria.

You realize that it is time to take your dose of Valtrex, but your bottle is empty.  You call your local pharmacy to ask for a refill.  The pharmacist reminds you that the cost for your prescription will now be $350.  You almost fall off your bed and ask “but what about my insurance?”  The pharmacist replies that he called the insurance plan administrator and they do not cover this medication for ‘MCI’.  You will have to pay out of pocket from now on.

Now you are really fuming and cry out in despair.  You call up the one friend who also suffers from ME/CFS.  Her voice on the phone sounds really shaky and weak, almost like a whisper.  You explain to her that you have been asleep for two years and just woke up in a different world that doesn’t make sense.  Ah, she says, you missed all the fiasco.  This is indeed a different world for us now.  We have become totally marginalized by the medical system.  We are looked upon as weak malingerers who have psychosomatic symptoms.

All testing and research into the disease has been halted.  The recommended and only treatments are GET/CBT, Yoga, breathing exercises and antidepressants.  There is no insurance coverage for any other treatment or medical testing.  If you are lucky to get disability it is only for two years.

You have suddenly become so tired that you can’t even finish your conversation with your friend.  Your head hits the pillow and as you fall asleep, your last thoughts are:  “I hope this is all just a nightmare!”

This of course is a dramatization depicting the worst possible outcome of the work of the Institute of Medicine to redefine the disease.  There are some who have faith that this process will work and that the IOM – with the help and guidance of ME/CFS stakeholders – will produce an adequate diagnostic clinical criteria.  Others fear that they will follow the example they set when re-defining Gulf War Illness, rename ME/CFS as ‘Chronic Multisymptom Illness’ or something similar, and treat it as a ‘state of depression’.

Our expert clinicians and researchers have written an historic open letter to HHS, stating:

“We strongly urge the Department of Health and Human Services (HHS) to follow our lead by using the CCC as the sole case definition for ME/CFS in all of the Department’s activities related to this disease.

In addition, we strongly urge you to abandon efforts to reach out to groups such as the Institute of Medicine (IOM) that lack the needed expertise to develop “clinical diagnostic criteria” for ME/CFS.  Since the expert ME/CFS scientific and medical community has developed and adopted a case definition for research and clinical purposes, this effort is unnecessary and would waste scarce taxpayer funds that would be much better directed toward funding research on this disease.  Worse, this effort threatens to move ME/CFS science backward by engaging non-experts in the development of a case definition for a complex disease about which they are not knowledgeable.”

Don’t Let It Come To This

If you would like HHS to cancel the IOM contract, please take action.

You can sign the petition to stop the IOM contract HERE.

The petition in support of the expert’s letter is HERE.

Jennie Spotila obtained the Statement of Work (SOW) from HHS for their contract with the IOM.

A letter signed by 35 ME/CFS expert clinicians and experts was sent to HHS urging them to follow their lead and adopt the CCC and to cancel the IOM contract.

Dr. Lily Chu’s letter to HHS asking them to cancel the IOM contract

Dr. Ellie Stein issues a statement in support of the letter signed by the 35 experts against the IOM contract.

PANDORA issued their new position on the IOM contract.

The National CFIDS Foundation issued a stance against the IOM contract.

Dr. Lucinda Bateman, who was one of the 35 signers of the experts’ letter to HHS, issued a statement re-thinking her position.


Letter by National Alliance for ME to HHS stating their support for the letter of the 35 experts.