Jody Smith marvels at how much difference one hour can make to those with ME/CFS, as much of the world has endured The Time Change in recent weeks … 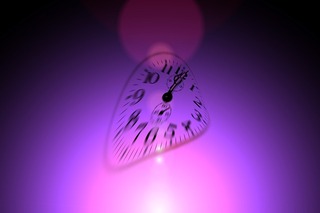 Where I live, we recently went through a time change, compliments of Daylight Savings Time. Having ME/CFS, I don’t need to travel anywhere to get jet lag. I just need the clock to be turned ahead, or backward by one hour.

I know that not everyone lives according to Daylight Savings Time but it happens twice a year in much of the world. Do you experience a crash that happens to occur after one of the time changes of the year?

The one that took place this past November really rocked my household. My son Jesse, who has ME/CFS as well, had been enjoying something approaching more regular sleep for awhile and then … everything got tossed in the air once more.

My husband Alan, who has FM, also went from sleeping pretty well for several months to being unable to fall asleep or stay asleep once more. He’d had success with a few sleep aids in the past, and took valerian and Rescue Remedy for a few weeks.


You might think that having the clock set backward by an hour shouldn’t be so bad, that it might seem like you’ve gained an hour. But my naturopath Dr. Kelly Upcott told me that in her experience, more of her patients are disrupted by the autumn time change than the one in the spring when we “lose” an hour.

It took Jesse a good month or more to regain the ground he’d lost last fall. I don’t think that one hit me in a noticeable way but a couple of weeks ago when we went on Daylight Savings Time, I struggled with a mini-crash and am still slowly coming out of it. And both Jesse and Alan have been struggling. They are both very fragile when it comes to being able to sleep at “normal” hours and this shift shatters them.

I actually sleep pretty well most of the time these days. The sudden new fatigue and fogginess really caught me by surprise this month. I thought at first it had to do with some busy-ness that had been going on at the time. But that type of thing doesn’t usually have this kind of effect on me anymore, fortunately.

I wondered if I was getting the flu — something else that doesn’t usually happen to me. I am one of the ME/CFS subset that doesn’t tend to get colds or flu that last more than a day or two before symptoms shut down … though they will sometimes lead to a crash instead.

Think I’d rather have the cold or flu, at least they end within a couple of weeks. These crashes in lieu of colds or flu tend to go on, sometimes for months.

The day after the spring time change, I was tired, and felt a little unsettled, my body clock and the clock on my computer didn’t jibe. We tried the usual things here in our household, trying to make the changes gradually over a few days … but that wasn’t helping either.

The head fog began to move in, first just a bit of mist but within a few days I was floundering, and things got worse over the next few weeks. I had to put some things off, stop stuff I had been doing, spent time in bed in the afternoons, which I hadn’t had to do since … well, since the last time change, perhaps.

Vibrating and swirling sensations in my hands, arms, and face made their unwelcome appearance after having been mostly absent for a long time. Mild vertigo accompanied by a slightly drunk feeling that I might bump into things made it hard to move around and get things done.

I found myself once again experiencing air hunger, breathing in great sighing gusts of air, and breathing out forcefully, as if I was trying to clear something. And I was tired. So tired.

So what do you do, right?

The usual. Gear down. Lay down. Quit thinking about things. Avoid taking on anything new. Curtail activity and make sure to take rest breaks after ridiculously small and normally easy things.


It has been working. Again. It has frustrated me. Again.

I am lucky, though, and I know it. I am pretty sure (is anyone every really sure?) that this is not going to last if I handle things ruthlessly and carefully. My Not To Do list is longer than normal and only the essentials are on my To Do list for now.

It’s a good thing there is a half a year before the next time change comes and throws a party in my head.