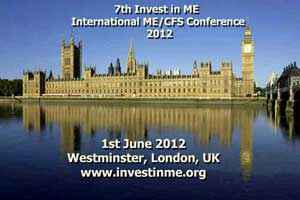 Jorgen Jelstad is a Norwegian journalist with a family member who has a severe case of ME/CFS. He tweeted the Ottawa conference last year and he tweeted the Invest in ME conference yesterday.

Suggesting  a certain excitement and vigor is present, he reported that a brain-storming session occurred two days prior to the conference.

From Dr. Peterson (Simmaron) to Dr. Gradisnuk (PHANU)  to Dr. Baraniuk, the one day conference was packed with intriguing speakers but none were more eagerly awaited than Dr. Fluge and Dr. Mella’s talk on Rituximab.

Fluge and Mella appear to be getting good results in their larger Rituximab (Rituxian)  followup study. They reported the responses have ranged from slight to moderate to  major with ‘quite a few’ major responses – and some people completely recovering (at least temporarily.  In an attempt to avoid the relapses that occurred after going off the drug in the past some patients are staying on the drug for long periods of time)

No one drug could ever work for everybody in as heterogeneous disorders as CFS but the report that some patients were completely recovering in this oh so difficult to treat disorder is exciting. Fluge are Mella have some strong evidence but they are not calling ME/CFS an auto-immune disorder just yet. Fluge stated, though, that they believe their evidence indicates “ME/CFS is a defined biological disease in at least a subgroup of patients.”


Mella reported that 40% of patients have relatives with autoimmune disorders – a startlingly high number-  and a further indication of a strong genetic component to this disorder.

In collaboration with the Alison Hunter Memorial Foundation Invest in ME has created an Autoimmunity Clinical Working Group to support research into autoimmune aspects of ME/CFS. Encouragingly the risk of side effects with this very strong drug appears to be quite low according to Mella.
The first PlosOne Rituximab paper has been extraordinarily well-read with 35,000 reads comparted to the 1,000 a typical cancer study gets.  That, of course, indicates ME/CFS continues to a subject of interest (if very low funding) and bodes well for the possibility of further studies. On that subject….

A survey of researchers and ME/CFS professionals on the field five years from now suggested most do believe Rituximab will be an accepted treatment for ME/CFS but they differed on how many people the drug will work for.

Rituximab is a very expensive drug but Rituximab’s manufacturer does  provide deep discounts for people with lower incomes. Find out more here.

The first study examining Etanercept’s (Enbrel’s) effectiveness in ME/CFS is underway in Norway under Fluge and Mella. Another autoimmune drug, Etanercept block the effects of an immune factor called tumor necrosis factor ( TNF-A) which becomes upregulated during infection. Some studies have found high TNF-a levels in CFS and others have not but Fluge and Mella  clearly have found them in some patients.  They are giving the drug to some patients who did not respond to Rituximab.

Kogelnik believes  the field is beginning to reach a critical mass with mainstream researchers showing interest as technological advancements  unveil critical aspects of this disorder. Dr. Kogelnik first got involved with ME/CFS when he worked on Dr. Montoya’s valcyte trial. He stated he feels ‘a huge sense of optimism’ now.

It may be that CFS was doomed to limbo status until the technology able to reveal it was developed. With the CFI,  CAA, CDC and WPI all employing cutting-edge technologies to look for pathogens this will be an interesting year.  As researchers data mining capabilities improve they will have a better  and better shot at understanding complex disorders such as chronic fatigue syndrome.  On the data-mining front the CAA’s Logosomix and Biovista projects could provide entirely new perspectives on biomarkers and drugs for ME/CFS over the next year or so.

Mark June 30th on your calendar as Dr. Peterson reported the Lipkin XMRV study featuring Dr. Mikovits will released on that date. Some 2 1/2 years after the Science paper was published the XMRV story will reach some sort of conclusion this month.

Dr. Peterson is very high on the CDC’s CASA project  which is  having CDC researchers pore over ME/CFS physicians patient charts to determine a) how different physicians are diagnosing their patients, b) what kinds of patients they are seeing and (c) how they are treating them.

Jorgen reported Dr. Peterson said this type of study was ‘long overdue’ and he’s right.  At Ottawa Dr. Unger told me it was always the CDC’s plan to use random surveys to  look at ‘CFS patients’ in the  general population and then to compare them to the kind of patients seen in specialist practices AND to compare patients from one practice to another. The problem is that its taken over 10 years to get to the second part.  In discussion Dr. Peterson has said he believes different patients are going to show up in different practices and this will illuminate the different types of ME/CFS that are present.

Finally Jorgen reported that after almost 40 years of work in this disorder, Dr Peterson  is optimistic about the future stating that he believes he ‘finally sees light at the end of a long tunnel”.

Dr. Marshall-Gradisnuk of PHANU must be riding high after landing a big grant and publishing some hot  studies recently.  She reported PHANU is ‘ building a nice repertoire of immunological markers that may help in early diagnosis of ME/CFS’.


Dr. Peterson and Simmaron are collaborating heavily with PHANU and Dr. Marshall-Gradisnuk will talk about biomarkers, Dr. Peterson, Rituximab and others in an interview with Phoenix Rising coming up shortly.

Thanks to Jorgen for the overview of the conference. See Jorgens twitter profile and follow him here.