“We’re excited to be in this partnership with the WPI”
Dr. Ken Hunter, University of Nevada Reno

The Whittemore-Peterson-Institute ( WPI) has been through a brutal stretch of bad news lately; first their aggressively defended XMRV discovery didn’t work out, then the firing of their lead researcher, Dr. Mikovits, left them under attack from her supporters, then her alleged theft of research materials embroiled them in legal matters and then Harvey Whittemore was hit with a lawsuit alleging misuse of funds, some involving the WPI (the WPI counter-sued.) One began to wonder if the University of Reno was beginning to regret being associated with such a hot-button Institute.

Strong Show of Support – Apparently not. On a recent Nevada Newsmaker program, Dr. Ken Hunter of UNR, in a strong show of support, made it clear the University was excited about their partnership. Hunter, who studies T-cells, auto-immunity and other subjects at the Hunter lab at the University, said the WPI and the University of Reno had an important, mutually beneficial relationship.

Hunter was particularly enthusiastic about a high-tech tool the WPI has helped bring to the University. A federal grant gave the WPI and hence the University use of an expensive, state of the art, $600,000 gene sequencing machine Hunter called ‘mind-boggling’ in its capabilities. This is the kind of machine, he stated, that can sequence the entire human genome in days if not hours. The machine was on loan but the WPI is planning to help acquire it and place it in the ‘genomic core’ of the University, giving both the University and the Institute a powerful instrument to decipher genetic signatures and identify pathogens – and a leg up on the competition – always an important factor for Universities.

The give and take goes both ways; the WPI is able to take advantage of resources and instruments the University has and vice versa.

Local -Grown Product – Given the roots the WPI has with the University the partnership is not perhaps surprising. Dr. Vincent Lombardi, the WPI’s Research Director and lead author of the Science XMRV paper, got his Ph.D from the University and knows many faculty members there. During a short visit there he stated that he felt their history  helped when controversies began to swirl. Lombardi, who initiated the line of research that lead to the XMRV finding, largely kept out of sight during the XMRV ‘era’.

More Good News – More good news came with an NIH audit.  The NIH came to town for a two day audit to see if the Lombardi lab was in good enough shape to keep their large NIH grant after Dr. Mikovits dismissal. Given the XMRV contamination issue a very thorough check was surely made but the  lab passed with flying colors. Then, in something of a surprise, the WPI was able – where other CFS research groups had failed – to snag a DOD grant (to study inflammatory markers in Gulf War Syndrome (GWS)). After DOD officials checked out the lab one stated they hoped to see more grant proposals from them. Two votes of confidence from federal research institutes must have bolstered their spirits.

Post XMRV ‘XMRV’ – XMRV was not a total loss; Annette noted that the 2-year saga had garnered them ‘very valuable’ information about the antibody response that they were following up on. Antibodies to something, after all, did show up and ‘deep sequencing’ work was underway to pin down what they found.

A More Cautious Approach – I took a deep breath when Sam Shad asked about a blood test for autism…in their past life the WPI might’ve jumped on that but they’re more cautious and more focused now…Calling such a blood test ‘a long way off’ Annette emphasized the WPI’s focus is on developing biomarkers for ME/CFS and fibromyalgia. This is not to say they’re not still interested in autism; they’ve got some preliminary data suggesting they might be linked (ME/CFS parents with autistic kids) but that study, if it occurs, appears a ways off.

Don’t Count the WPI Out – the WPI has gone through some brutal times but don’t count them out. They have University support , Dr. Lombardi has passed two important tests in his short tenure as Research Director, and he described long, long workdays spent working on research projects  he was clearly excited about.

Back to the Fundamentals – After focusing almost solely on XMRV for two years, the WPI is back to their original mission – looking for pathogens and immune research.  Ironically, the two-year focus on XMRV turned out to be a boon for their other projects as the technology, even in that short period, improved leaps and bounds. Expect some interesting studies to come out this year. 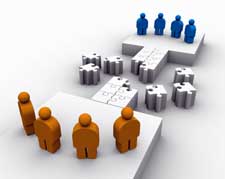 W’P’I – My visit there brought to mind how nice it would be if the ‘P’ in WPI was still around. The research side of the WPI sounded like it was humming -Dr. Lombardi excitement was clear –  but  the clinic was very quiet, the infusion room looked virtually untouched and there’s clearly room for expansion. Dr. Peterson’s got the patients and decades of experience – there’s no replacing that and no one in Nevada that can touch it – and the WPI has the labs…

Nobody knows what happened to tear the partnership asunder but if that could somehow be put aside the combination still looks like a win for both and its hard to argue that the community wouldn’t benefit greatly.

A modern, beautifully designed building the WPI was impressive. The ups and down of the Institute could make your head spin but if you put that aside and focus on the fact of its existence – a modern research/treatment center built to tackle ME/CFS – you realize you’re in the midst of something precious which has enormous potential.

The WPI’s logo is a butterfly and its an apt image for the Institute at this stage of its life with the organization still evolving, still taking shape and still, so to speak, spreading its wings.  A strong WPI is a tremendous asset for the chronic fatigue syndrome community.