Tom Kindlon has been nominated in two categories for his herculean efforts with regard to health activism on the internet and in particular his work in disseminating the reality of the PACE Trial and GET/CBT as ‘effective’ treatments for ME/CFS. By Firestormm. 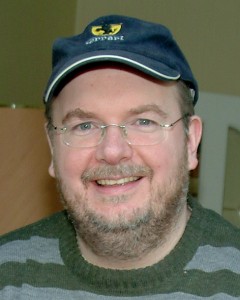 The other day, I happened to notice a link posted on the Phoenix Rising Facebook page to the WEGO Health Activists competition, and saw that Tom had deservedly been nominated in the “Best in Show: Twitter” and the “Health Activist Hero” categories.

Tom has been one of those ever-present characters in my ME-world for as long as I have felt able to get back online, and his painstaking work on the PACE Trial and on those less than satisfactory, Cognitive Behavioral Therapy and “Exercise” studies, has been truly outstanding.

He is a familiar member here on Phoenix Rising, commenting most thoroughly in the research section, and is an avid ‘tweeter’. He achieved wide acclaim when his own paper “Reporting of Harms Associated with Graded Exercise Therapy and Cognitive Behavioural Therapy in Myalgic Encephalomyelitis/Chronic Fatigue Syndrome” was published in 2011.

A prolific letter writer to scientific and medical journals for many years, including the British Medical Journal, his latest letter received a published response from Professor Peter White, the lead author of the PACE Trial, and the resulting debate has now spilled over into “Rapid Responses”.


But Tom is not only involved with revealing the truth about PACE, and the recommended ‘illness management’ therapies. He also works for the Irish ME/CFS Association, in a voluntary position as the Assistant Chairperson, and through Twitter helps to raise awareness of ME in general and by calling attention to and discussing new research.

It is not very often that we get the chance to do more than say “Thanks” to one of our own, to someone who goes that little bit further in taking our concerns so effectively to a wider audience, but by endorsing his nomination in this competition, at least we can for Tom.

And I also think your endorsement will help to raise the profile of our disease among the wider health activist community.

Tom Kindlon’s story in his own words…

“I have Myalgic Encephalomyelitis (M.E.)* since February 1989, when I was just 16. I wasn’t diagnosed till autumn 1994 by which time I was severely affected. Although I am not as ill as I was for the first few months, when I was basically bedbound, only able to read and understand cartoons, I remain severely affected 19 years on, only leaving the home for important appointments or to go to our holiday home for the summer.

I blame the late diagnosis, and following advice to exercise, for the severity of my illness as in the early years I was only mildly affected (able to study full-time, once I cut out most extracurricular activities). After being diagnosed for over a year, I realised there was a good chance I was going to be stuck being quite ill and disabled for a long period, possibly indefinitely, a prospect that wasn’t appealing.

Moreover, I realised that there wasn’t a huge effort to research the illness well; it wasn’t on the radar the way many other conditions were.

I have been busy for the last 18 years working away as a (voluntary) ME activist. Much of what mum and I concentrated on in the early years was raising awareness and understanding in Ireland. Mum did over one hundred TV and radio interviews and I have done a few dozens and been featured in most of the national newspapers in Ireland. We have also helped arrange for around 120 Irish families affected with ME to tell their story over the years. A lot more people are diagnosed here now and attitudes have improved.

In the last decade, my concentration levels have improved a lot and allowed me to read a lot of research papers in the field. I realised a lot of rubbish was going unchallenged and the pool of people who were trying to respond ever was small, so have spent quite a bit of time responding to papers: I’ve had 15 letters published in various medical journals along with over 100 e-letters.

My proudest achievement was the publication of my paper, “Reporting of Harms Associated with Graded Exercise Therapy and Cognitive Behavioural Therapy in Myalgic Encephalomyelitis/Chronic Fatigue Syndrome” at the end of 2011. I had previously been quite academically able but things are more difficult now with M.E. so it took a lot of work and sacrifice over more around 15 months.

I still live at home with my parents who take care of most of the practical stuff, which frees me up to use the energy I have on ME matters. I follow ME news closely and try to help the ME cause, in Ireland and internationally, as best I can.


Twitter and other outlets allows me to share what I find to a wider audience. I believe there is power in numbers and together we can make a difference; conversely, I feel that if I and others don’t try, we will be ignored and fobbed off indefinitely with rehabilitative therapies like graded exercise therapy and cognitive behaviour therapy based on scheduling increased activity.

*Perhaps better known in some countries as “Chronic Fatigue Syndrome” (CFS), although some definitions for CFS are overly broad.”

All you need do to help ensure Tom is given a fair crack at winning in the categories, is to hit the link HERE which will take you to Tom’s nomination page.

Then simply select ‘Endorse Tom Kindlon’ which appears beneath his picture, choose the award category (you can vote for either category or for both separately), and complete the short form (name and email address).

Details about WEGO Health (who they are and what they do) can be found HERE and Frequently Asked Question’s HERE.

The competition closes 31 December 2013 but please get your votes in as soon as you possibly can. Thank you.