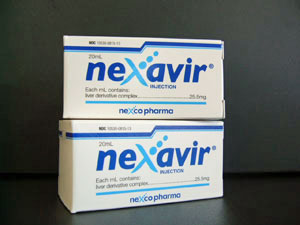 
Dr. Cheney used Nexavir as an immunomodulator and broad spectrum antiviral and has called it a ‘weaker form of Ampligen’.  According to the CFSSufferer blog Dr. Cheney reports that Nexavir in combination with other treatments results in a 20-80% improvement.  Dr. Cheney stopped using Nexavir after his ‘echo-terrain’ maps suggested to him that the drug may have negative effects.