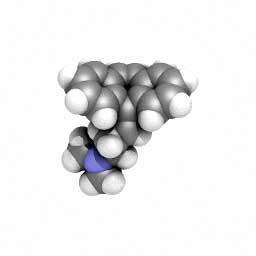 a muscle relaxant approved to relieve muscle spasms and pain in arthritis and other conditions. It is commonly used off-label for sleep in fibromyalgia (FM) and can be helpful in TMJ, tinnitus and others.  (A formulation created specifically for FM is reportedly under development.)

Flexeril appears to stimulate the release of a neurotransmitter, norepinephrine, which inhibits the activity of the alpha motor neurons which trigger muscle contractions.

Flexeril May Help in Chronic Fatigue Syndrome (ME/CFS) Because…

it may assist in aiding sleep and may be effective in reducing the muscle contractions that may contribute to pain in fibromyaglia and chronic fatigue syndrome.

A 2004 meta-analysis of five Flexeril FM trials concluded FM patients on Flexeril are 3 times more likely to improve than those on placebo but that five patients would need to be treated to find one that improved.  The analysis reported that the patients that improved would, in general, experience ‘moderate’ amounts of sleep improvement, ‘modest’ amounts of pain improvement and no improvement in pain and fatigue.  Note that every study in the analysis, however, used far more Flexeril (10 mgs) than the more effective 2011 low dose study cited above; eg a lower dose of Flexeril might have produced better results.

Studies have not shown Flexeril is effective in treating muscle spasms when used for more than two weeks, however, a 8-week study of low dose Flexeril found that its effectiveness was maintained at 8 weeks.

Dr Podell notes that very low doses (1-2 mgs.) can sometimes be helpful in FM and ME/CFS.   A 2011 study found 1-4 mgs of Flexeril at bedtime resulted in positive effects in FM (see above).  The IACFS/ME Treatment Primer Recommends 5-10 mgs.

Increased rates of drowsiness,  dry mouth and dizziness are some of  the more common side effects.