Collaboration is a key aspect of Dr. Vernon’s vision. She won the OFFER Research Excellence Award and during her acceptance speech she hit this aspect hard. This wasn’t your usual “thank you address’. Dr. Vernon used the bully pulpit she had to communicate her vision of a vastly changed ME/CFS Research field and she didn’t mince words; she asserted that the research community needs to put its ‘ego’s aside’ if this field is going to progress rapidly. If researchers are going to make a difference in this disease in a suitable amount of time they’re going to have to look beyond publishing their papers and accruing their professional brownie points and really start collaborating.

I have come to know her as a passionate organizer, networker and creative thinker who has made it her mission to advance the field” Dr. Lucinda Bateman

It soon became clear that Dr. Vernon is walking her talk. She is building (very quickly!) a collaborative and creative research network at the CFID’s Association of America.

The CAA is funding six grants under its Research Initiative; three of the teams are smashing the normal boundaries seen in academia and research. The group studying inflammation and metabolism in the brain is collaborating with the group examining autonomic nervous system problems in the body and these two groups are handing off their data to a third group, which may have the most difficult job of all; analyzing both groups data together to create (hopefully) a model of inflammation/ autonomic nervous system/brain dysfunction in ME/CFS. 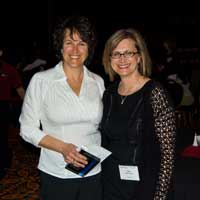 These projects didn’t start out this way. The groups submitted separate proposals and expected to work separately but by the time Dr. Vernon had gotten through with them they were one large, very multi-dimensional project. The separate projects will still stand or fail on their own – they’ll have their separate results to report on but by combining all three they’ll also take at shot at elucidating the big, big picture. This is the kind of creativity that private funding organizations such as the CFIDS Association of America often excel at.


These three groups will be meeting physically several times (next in Sept, 2009) and in between those times they’ll be sharing their findings via a secure Google Group. This is another instance of Dr. Vernon’s emphasis on breaking down boundaries; research groups traditionally do not share their findings before publication.

Jumping on Another Opportunity

Meanwhile Suzanne Vernon spent several months getting four more proposals together in an attempt to take advantage of the opportunity that unexpectedly fell in their laps; the Obama administration’s NIH stimulus package.

Not only did Dr. Vernon come up with a very creative set of proposals and she broadened our reach by bringing in new researchers from more universities across the country – a key need in this disease. In a very short time Dr. Vernon has effectively addressed one of the key shortcomings of the research field – no new faces. We should know by October which if any grants to approved.

The CAA has required that the studies produce significant results in 18 months – a very short turnaround in the medical field and a great relief for patients waiting for the results of single studies that last 5 or 6 or even more years.

(Dr. Natelson received the biggest reward of the evening; the Govenor Rudy Perpich Memorial Award a well deserved award for this very active researcher/physician/advocate/author but Dr. Natelson, himself, is on year six of a grant to study cytokines in ME/CFS that still has not been published. Let’s not even dwell on the infamous Hurwitz blood volume study that ate up more money than any other ME/CFS grant over the past ten years and eight years later still hasn’t gotten into print. The CAA’s demand that its researchers is a welcome relief to these slower than mud researchers.

When Dr. Vernon got up to address the Conference she took a close look at the failings of the ME/CFS Research field.

A Vision (Finally!) of the ME/CFS Research Community

Dr. Vernon was one of two speakers to get a standing ovation (Annette Whittemore was the other) at the Conference. I was surprised at this. Dr. Vernon has worked in this field for quite a while now but she was mostly kept under cover at the CDC. She remarked during a talk we had how eager she was when she took the CAA’s job to get out and really network with the research community – something she couldn’t do in her former job at the CDC. Her networking has obviously struck a chord as the room immediately leapt to its feet when her award was announced.

Two things undergirded Dr. Vernon’s presentation. The first is that she’s a big picture thinker; the second is her rigorous research background. With its multi-systemic interactions ME/CFS is a good disease for someone who likes to connect the dots. This kind of systems thinking also makes her an good candidate for getting researchers to network and collaborate, which is, of course, a big part of her job at the CFIDS Association of America . (As we saw if the researchers can’t connect the dots she’s perfectly happy to connect them for them).

Dr. Vernon’s talk suggested that if ME/CFS research is going to attract the top names in the field it’s going to have to communicate to them on their level. Although she didn’t call chronic fatigue syndrome a ‘niche topic’ it’s clear that in the medical research that’s exactly what it is. Dr. Vernon asserted that if ME/CFS is going to turn into a serious field of medical inquiry it’s simply got to clean up its act. She started out by noting what hasn’t happened in this field.

“CFS is a public health crisis but it will not get the respect and research dollars the CFS community deserves until we the research community learn how to put egos aside and work together to generate the kind of evidence-based research that is required.”Dr. Suzanne Vernon at the Reno Conference


Five years ago a federal advisory committee identified gaps in knowledge that were hindering research into this disease. They were very basic and they were huge. Even after spending $187 million dollars researchers are still 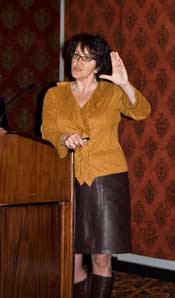 unclear if this is a discrete illness or many illnesses. There are still problems with diagnosing the disease, there is a lack of clarity about treatment and there are no biomarkers. We know little about what happens early in the disease to turn an infection into a chronic illness and there’s still no way to identify someone as they come down with this disease. Basically Dr. Vernon asserted that thus we’ve gotten little bang for our buck from the research effort- a notion the patient community would have little argument with.

Of course the very nature of this disease makes it difficult to study it in an organized fashion. Since no single injury has been reported this leaves researchers looking at virtually every aspect of the body; a situation that breeds messiness. One researcher in Italy is measuring cortisol this way while another in the UK is measuring it that way. A group in California does the exercise test this way while another in Spain does it this way. A researcher in California prepares their RNase L sample one way while one in Belgium does it differently. Each change has the potential to create confusion.

Dr. Vernon feels this has got to stop. Much of the medical field views ME/CFS as a ‘wastebasket’ disorder and a big reason for this are the conflicting study results. She asked what if a good research definition was produced? What if every researcher did use the same tests for ME/CFS? What if every study collected materials for gene expression and then shared them? What if clear rules for subtyping were mandated? (What if every study looked for subtypes?) What if there was a central repository for ME/CFS samples that researchers could access. (How much would that speed up things?) What would happen if the ME research field pulled itself up by its boot straps and created clear standards? It would certainly shock a research world more used to denigrating this field than applauding it.

We can solve CFS and we can serve as a model scientific and medical community if we coalesce and tackle the public health crisis together, by learning, communicating and sharing information and experiences with each other”

One would imagine that the Whittemore Peterson Institute team would be strong advocates for this approach. The leader of the WPI’s science team, Dr. Judy Mikovits, comes from a similar background and she’s already run headlong into the ME/CFS standards problem. The Whittemore-Peterson Neuroimmune Institute has a sample repository that’s about a fifth full but they’re not accepting samples yet. Why not? Because they won’t accept samples unless they’re done according to certain standards (which they’re now in the process of codifying). In effect the WPI is creating a key leg of a standardized approach to ME/CFS right now.

This is a great idea but who’s going to do it? The NIH has groused about a lack of standards for years but’s done nothing about it. Besides things tend to go south at the NIH when they get involved: you wouldn’t want them setting standards. The CDC does not appear to be interested and they’ve largely written themselves out of the picture with the research community anyway; they don’t collaborate, they don’t appear to be interested in other research efforts and few researchers appear to trust them. (Toni Whistler did make an emphatic call for every study to employ stressors such as exercise, however.) The CAA is primarily a patient support organization; despite having Dr. Vernon on board they don’t have a strong enough science base to lead the field. It seems clear that the only group that could pull this off is our professional research organization – IACFS/ME. The question is whether this rather disorganized organized and underfunded organization can pull itself together enough to do it. I

In order to achieve her goals Dr. Vernon will have to break the isolation present in an ME/CFS research field one that is permeated , one told me, with warring cliques. It’s hard to think of a disease, though, that could profit more from this kind of an approach; funding, of course, is very low so efficiency is paramount – and the disease is clearly multi-systemic in nature which requires, of course, that researchers from different fields work together.

In a short period of time Dr. Vernon has introduced into the ME/CFS research field a dynamism it hasn’t seen before and a vision of cooperation that it doesn’t seem to have contemplated. Whether she’ll be able to help create a true ME/CFS research ‘community’ – one that works together and shares data is, of course, unclear. Surely we would be all better off for it.