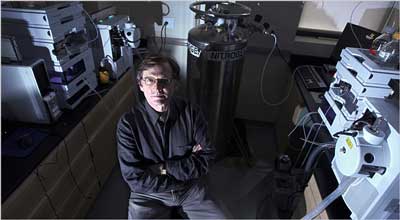 (The New York Times article on Dr. Ian Lipkin – the man chosen by the NIH to lead their hunt for XMRV in CFS – portrays a man at the top of his field.)

Dr. W. Ian Lipkin was spending the afternoon prowling his empire of viruses. The Center for Infection and Immunity, which he directs, occupies three floors of the Mailman School of Public Health at Columbia University. Rather than wait for the elevator, Dr. Lipkin ran up and down the back stairs to move from floor to floor, leaning into the doorways of labs and glass-walled offices to get updates from a platoon of scientists.

Gustavo Palacios was sequencing the genes from a new strain of Ebola virus found in a bat in Spain — a worrisome development, since the fatal virus has almost never been found outside Africa.

Nick Bexfield of the University of Cambridge had flown from England with a new hepatitis virus that has just broken out in British dogs.

Some researchers were examining New York flu, others African colds. The blood of patients with mysterious, nameless fevers was waiting to be analyzed. There was dried African bush meat seized by customs inspectors at Kennedy Airport. Horse viruses, clam viruses: all told, members of Dr. Lipkin’s team were working on 139 different virus projects. It was, in other words, a fairly typical day.

Over the past 20 years, Dr. Lipkin has built a reputation as a master virus hunter. He has developed ways to quickly identify familiar viruses and ways to search for new ones.

“If scientists are lucky, they’ll identify one novel virus in their whole life,” said Dr. Anthony S. Fauci, director of the National Institute of Allergy and Infectious Diseases. “Lipkin really stands out from the crowd.”

The emergence of H.I.V. in the 1980s first drove Dr. Lipkin to search for viruses. At the time, he was a neurology resident at the University of California, San Francisco, and was watching many patients fall ill with AIDS. It took years for scientists to discover the virus responsible for the disease. Dr. Lipkin worried that in years to come, new viruses would claim more lives because of this lag. “I saw all this, and I said, ‘We have to find new and better ways to do this,’ ” Dr. Lipkin said.

One reason that viruses can be so hard to find is that they’re so small — typically a few millionths of an inch across. Even the most powerful microscopes may not be able to reveal viruses if they’re lurking in a hiding place in the body. Sometimes scientists can detect viruses by rearing vast numbers of them in laboratories. It’s also possible to detect them by looking for antibodies in infected people. But these methods can be slow and unreliable. Dr. Lipkin thought it might be better to find viruses in a different way. He would go fishing for their genes.

“It had never been done before, and it was an obvious thing to do,” he said.

Dr. Lipkin’s first quarry was the cause of a bizarre disorder caused borna disease. Borna disease had first been discovered in horses in the late 1800s; it attacks their brains and causes them to flail uncontrollably. When scientists injected filtered brain extracts into healthy animals, they could develop the disease as well. Doctors worried that it might cross over into humans and have equally devastating effects. But no one had ever found a pathogen in an animal sick with the disease.

If a virus was responsible for borna disease, Dr. Lipkin reasoned, he might be able to find its genes in an infected brain. He and his colleagues infected rats with the disease and then extracted genetic material from them. They first identified the pieces of DNA that came from the rats themselves. After they painstakingly subtracted the host genes, they were left with a small amount of genetic material present only in the sick rats.

To see if these genes came from the cause of borna disease, Dr. Lipkin transplanted them into bacteria. The bacteria used them to make proteins. If these were proteins from the source of borna disease, then infected animals might have made antibodies precisely tailored to grab onto them. In 1990, Dr. Lipkin and his colleagues reported that when they mixed borna antibodies with the proteins, they embraced each other tightly. This discovery allowed Dr. Lipkin and his colleagues to isolate the virus, which came to be known as the borna virus.

As Dr. Lipkin earned his reputation as a virus hunter, other researchers began to bring difficult cases to him. In 1999, for example, doctors noticed a cluster of cases of encephalitis around New York City. They shipped blood from their patients to Dr. Lipkin, who was then at the University of California, Irvine. Analyzing the genetic material, he and his colleagues concluded that the encephalitis had been caused by West Nile virus. It was the first time the virus had been identified in the Western Hemisphere. Since Dr. Lipkin made the discovery, West Nile virus has spread across the continental United States.

Dr. Lipkin’s success with West Nile virus led to an invitation to come to Columbia in 2002 and set up the Center for Infection and Immunity. He and his colleagues began developing faster, more sensitive methods to find viruses. At the time, the most sophisticated technologies for identifying viruses could only compare their genetic material to one known virus at a time. Dr. Lipkin and his colleagues developed a more powerful system, known as MassTag PCR.


The researchers prepare a cocktail of genetic material from 20 or more kinds of viruses. When they mix the DNA from a sample into this cocktail, the viral segments will bind to any matching DNA. Dr. Lipkin and his colleagues can then fish out these matching segments and shoot them through a mass spectrometer to determine their mass. From these clues, the scientists can often determine what kind of virus they’re dealing with.

MassTag PCR is relatively cheap and fast, but it can miss viruses that are scarce or especially exotic. It failed, for example, to reveal the cause of three puzzling deaths in Australia. In 2006, three women received liver and kidney transplants from the same donor. For a month after the transplant, they were in good health, but then they all suddenly developed intense fevers and died. Dr. Lipkin and his colleagues analyzed samples from their bodies, but they couldn’t find any culprits with MassTag PCR.

At the time, Dr. Lipkin and his colleagues were adapting new genome sequencing machines to virus hunting. They decided to turn the machines on this mystery.

They gathered 100,000 genetic fragments from the three women and deciphered their sequences. Most of the sequences belonged to the patients themselves. But 14 out of the 100,000 sequences belonged to a new virus infecting all the women, which has been called the Dandenong virus after the hospital where the transplants took place.

When Dr. Lipkin started finding viruses, the process was agonizingly slow. It took him three years to isolate the borna virus. Now it’s possible to identify new viruses in a matter of days.

Dr. Lipkin and his colleagues are now working with the Department of Defense on even faster methods. In one recent exercise, researchers at the center were shipped two samples of genetic material. Each was a mixture of host DNA and the genes of a rare, dangerous virus. The researchers identified both viruses in six hours.

Viruses don’t have to cause such horrific symptoms to have a major effect on people’s health. A number of studies indicate children are at higher risk of schizophrenia and autism if their mothers were infected by viruses during their pregnancy.

“We think there may be a huge range of viruses involved,” said Mady Hornig, an epidemiologist at the Center for Infection and Immunity.

Dr. Hornig, Dr. Lipkin and their colleagues are investigating the ways in which viruses alter the brains of fetuses. They’ve found that mice suffer similar changes in their behavior if their mothers are exposed to viral proteins. In a paper published last month in the journal mBio, the scientists report how these changes happen. In response to the viral protein, the mouse’s immune system produces molecules that alter certain stem cells in the fetal brain. “The stem cells are not maturing into neurons,” Dr. Hornig said.

Now the Columbia scientists are exploring whether this same cause and effect is at work in humans. They are collaborating with researchers in Norway to track the health of more than 100,000 Norwegian children. As some of the children develop autism and other psychological disorders, the scientists will be able to look at blood samples taken from their mothers during pregnancy to see if viruses or other factors played a role. “We can go back and say, ‘What was going on in the first, second, third trimester?’ ” Dr. Lipkin said.

Most babies born to infected women will not suffer any harmful effects from viruses, Dr. Lipkin said. Exactly why some babies do is the result of a complex interplay of genetic and environmental influences. Still, Dr. Lipkin thinks it’s wise for pregnant women to take precautions to avoid viral infections. “Our work suggests it is prudent for pregnant women to have influenza vaccines,” he said.

Yet Dr. Lipkin does not think that viruses should be blamed for all our ills. In fact, he and his colleagues spend much of their time engaged in what he calls “de-discovery,” exposing false links made between viruses and diseases. “It’s important for the credibility of the field,” he said.

A decade ago, for example, a British physician, Dr. Andrew Wakefield, claimed that vaccines against measles, mumps and rubella were linked to autism. One possibility he raised was that the live measles in the vaccines created inflammation in the intestines, allowing toxins or even viruses to move to the brain. One piece of evidence Dr. Wakefield and his colleagues offered was the finding that autistic children with intestinal disorders had high levels of measles viruses in their intestines.

Many researchers have ruled out the vaccine-autism link by looking at the epidemiology of the disease. Dr. Lipkin decided to test the claim in a different way, by looking for the viruses themselves. Teaming up with some of Dr. Wakefield’s original collaborators, he found no difference in the levels of measles viruses in the intestines of autistic and normal children with gastrointestinal disorders.

Dr. Lipkin is now preparing to dive into a new controversy. In October 2009, a team of scientists claimed to find a virus known as XMRV in people with chronic fatigue syndrome. A pitched debate has arisen over the findings. A number of other groups have since failed to find the same link. To make matters more confusing, a team of researchers from the Food and Drug Administration, the National Institutes of Health and Harvard Medical School reported in August that they found related viruses in people with chronic fatigue, but not XMRV itself. “I think we have to keep an open mind on this,” Dr. Lipkin said.

In September, Dr. Fauci asked Dr. Lipkin to organize a large-scale investigation. Earlier this month, Dr. Lipkin brought together scientists from three labs that have gotten contradictory results to begin working together on a new search for the link.

“There isn’t anybody any better at this than Ian Lipkin,” said Dr. Fauci. “If he can’t find it, it probably doesn’t exist.”