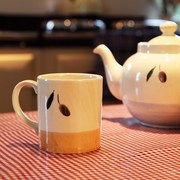 by Jody Smith
Adrenal fatigue may respond favorably to the use of adaptogenic herbs. An adaptogenic herb helps the body to normalize after times of stress. It decreases hormone secretions when levels are too high, and increases hormones when levels are too low. Many athletes like adaptogens because the herbs enable their bodies to recover faster from an intense workout or competition.
Traditional Chinese medicine and Ayurvedic medicine have made use of adaptogenic herbs for centuries. A few of these herbs, like ginseng and echinacea, have become known to the general public.  But there are plenty of other adaptogenic herbs to choose from. They can be used in many forms, for instance in capsules, tinctures, powders, drunk in tea or mixed with foods, in a compound with other herbs or standing alone.
So what are some of these adaptogens? Here’s a little information on a few of the more commonly used herbs.
Siberian ginseng or eleuthero (Eleutherococcus senticosus) has been used for centuries in China and Russia to adapt to stress, especially physical stress. Eleuthero has been found to sharpen mental alertness and cognitive function, as well as to enhance immunity, increase strength and undergird endurance. Its active ingredients are eleutherosides.
Korean or Asian ginseng (Panax ginseng) eases mental and physical exhaustion. It strengthens immunity and helps the body adapt to stress. Insomniacs should not take it after midafternoon.

Eleuthero and Panax ginseng have some similarities in their effects. However there are also significant differences. Eleuthero is more often recommended for patients suffering from stress effects as well as chronic or recurring infections. Panax ginseng is liable to be used by people aged 40 and older, as a general health enhancer.
Ashwagandha or Indian ginseng (Withania somnifera) takes care of sleep problems caused by stress. It increases testerone and DHEA-S levels. Ashwaganda has been used for hundreds of years in Ayurvedic medicine for stress relief. It contains phytosterols and alkaloids. Its main active compound appears to be the alkaloid withanolide.
Ashwagandha and Panax ginseng can complement each other in adrenal support. Ashwagandha shores up endurance, libido and strength while Panax ginseng supports thyroid and adrenal function.
Licorice root (Glycyrrhiza glabra and G. uralensis) offers multiple benefits along with its adrenal support. It has anti-inflammatory and antiviral properties. It can also help with digestive, respiratory and urinary infections and irritations. It assists in the healing of ulcers, and may correct female hormone imbalances. Licorice contains triterpenoid saponins which affect the cortisol/cortisone balance in the body. Licorice’s main active ingredient is glycyrrhizin.
Licorice often gives swift improvement. But be aware that licorice root is contraindicated for cases of edema, electrolyte imbalance or hypertension. Using this herb for longer than two weeks at a time may cause sodium or water retention, or it may result in excretion of too much potassium. It is generally safe when used in moderation.
Rehmannia glutinosa has effects similar to licorice, working as a tonic and as adrenal support. It can enhance immune function and overall wellbeing, particularly in the case of autoimmune conditions. Rehmannia also supports adrenals that have suffered due to hypothyroidism or hyperthyroidism.
Astragalus membranaceus relieves fatigue and can be used as a tonic while it also lends itself to adrenal support. Its bioactive components are polysaccharide fractions, isoflavonoids, saponins, triterpenoids, and gaba-aminobutryic acid. Blood glucose, blood pressure and blood flow may be affected by these components. They may have an effect on glucose, growth hormone levels and the body’s water balance as well.
Astragalus is often used with rehmannia and eleuthero, among other herbs. A combo of astragalus, eleuthero and echinacea may be a pick-me-up for overall health as well as an aid in overcoming recurring respiratory infections.
Gingko biloba enhances blood flow, improving peripheral circulation and offers antioxidant defense, even as it also affects the body’s ability to adapt to stress levels.
Rhodiola rosea is used to reduce effects of mental and physical stress. It lifts the mood, and increases libido and mental sharpness. It reduces fatigue and anxiety, enhances cognitive function and endurance. It has been favorably tested for fatigue and stress management. Mental abilities have improved and depression has decreased. Rhodiola controls cortisol, stress-activated protein kinases and nitric oxide as well as other leading players of the body’s stress response.

These are only a few of the adaptogens available. The list of them is long, and the possible impact on health is wide and varied.
Choosing an adaptogen that will work for you isn’t always straightforward. Some may bring noticeable improvement, some may appear to do nothing. Others may make you feel worse. A particular adaptogen may be beneficial at one point in recovery and do nothing for you at another stage. One that made you feel sicker at an earlier time may relieve symptoms later on. Always start out with small doses, and let your body be your guide.
Sources:
Adaptogenic Herbs in Adrenal Fatigue: A Lowdown
https://www.adrenalfatiguefocus.org/adaptogenic-herbs-in-adrenal-fatigue.html
Herbal Primer Using The Healing Herbs
https://www.healthy.net/Health/Article/Herbal_Primer_Using_the_Healing_Herbs/908
Herbal Options for Managing Adrenal Fatigue
https://holisticprimarycare.net/topics/topics-a-g/chronic-disease/1241-herbal-options-for-managing-adrenal-fatigue
Share this!