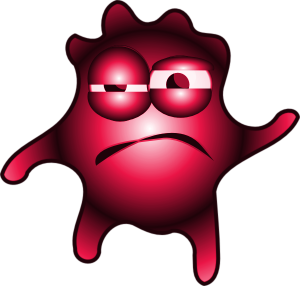 For me, the star attraction of Nancy Klimas’ recent CFS/GWI conference was always going to be Professor Mady Hornig and her talk.

Hornig might not be well known by ME/CFS patients – yet – but her boss is: Ian Lipkin, who so skillfully handled the XMRV ‘dediscovery’ study (which she worked on too). Despite disproving a link with XMRV, Professor Lipkin made clear his belief that ME/CFS was a serious disease that had not received the serious attention it deserved. Even more important – given his stellar record as a scientist – was his commitment to playing a serious role in trying to solve the illness. He’s asked Mady Hornig to lead their hunt for the cause of ME/CFS, so I was hoping for an update on how exactly they were going about the work and when results were likely.

As well as that, we had a presentation of science that made my eyes pop, as Mady Hornig took us through some of her incredible work in other illnesses where brain and immune system take centre stage too. If she brings these kind of approaches to ME/CFS then I think we will benefit enormously – more on this next week.

First, though, to the world’s largest ever ME/CFS biomedical study: the hunt by Hornig, Lipkin and colleagues for a virus or other pathogen that may cause our illness.

Work has already started with around 400 patients plus controls, including 200 patients + controls from the CFI pathogen study (Professor Hornig is Principal Investigator for CFI’s Pathogen Discovery and Pathogenesis). If that’s not enough, they are hoping to get funding for up to a further 400 patients and controls. Assuming my maths are right, that makes a mind-boggling maximum of 1,600 subjects: 800 patients and 800 controls. This is a big step up for ME/CFS research.


The major part of the study is looking for pathogens – viruses, bacteria or protozoans both known and unknown. But they are also looking for protein/immune abnormalites in patients, and they even plan to take a look at gene expression too to see if that throws up any clues.

The pathogen hunt has three steps: 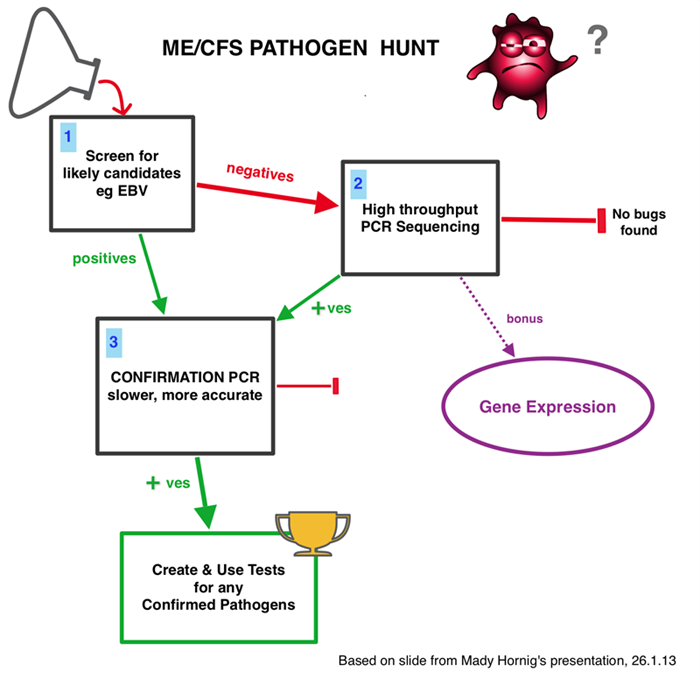 Finally, once they have confirmed candidate pathogens – assuming they find ones that have a statistically significant link with ME/CFS – they will develop new tests specifically for these pathogens.

As a bonus, the heavy-duty sequencing techniques in stage 2 makes it fairly easily to look at gene expression too. Previous attempts to identify unusual patterns of gene expression in ME/CFS patients have found differences, but these have not stood up to the test of replication. Hopefully the much larger cohorts used here will produce more reliable findings, and show which genes go awry with with ME/CFS.

The team will also try to define ‘host profiles’, looking for a unique protein signature associated with the illness. If the study does find a robust CFS signature, it could be used for diagnosis – and a validated diagnostic test is almost the Holy Grail of ME/CFS research. The signature could also be used to measure treatment progress.

They are using a fancy technique called ‘multiplexed immunoassay’ to look at over 50 specific proteins that are markers of immune/inflammatory changes, or oxidative stress. Again, the idea is to home in on plausible candidates for disruption in ME/CFS. For a smaller sub-sample, they will look more widely for any abnormality in protein profiles using “Target proteomics Mass Spectroscopy” – Nature’s “2012 Method of the Year”, no less. This approach could throw up proteins no one has yet considered playing a role in ME/CFS, giving new clues to the causes of the illness.

Another good reason to look for protein signatures is to detect general signs of infection. One possible scenario raised by Hornig is that lots of different bugs can trigger ME/CFS, and if that’s the case then each individual pathogen might not show up as statistically significant. (This is to do with statistical power, but you really don’t want to know). Finding the fingerprints of infection or inflammation instead might prove a general link between infection and ME/CFS, even if no individual pathogens can be pinned down for sure.

First results due later this year

The first result for these studies will be submitted to journals in the next few months, with more papers submitted later in the year. By the time the year is out we should have a fairly good idea if there is a strong link between pathogens and ME/CFS.

Professor Hornig concluded by saying that they may not find an infectious agent, it may be an immune change. It could even be something else. But if you look at the scale and cutting-edge nature of their work then, even if it does turn out not to be a pathogen, these are very good people to have on the case.

Aiming to look for genetic factors

In the Q&A section after her talk, someone asked if Mady Hornig and her team also plan to look for any genes that are associated with ME/CFS. It turns out they don’t have enough samples to look at the whole genome, so instead they would like to use a targeted approach that Hornig calls ‘swimming upstream’.

This involves identifying unusual patterns in proteins and/or gene expression using results from this study, then working backwards to identify which gene could be involved in producing these protein changes. It’s an approach the group has used successfully before, and requires a smaller sample size for robust results.


A wider look at the whole genome might be also possible at a later date using meta-analysis. This would combine their data with data from other studies – giving sufficient ‘statistical power’ for robust results.

The studies I’ve covered above are hugely impressive, but what grabbed me even more was the rest of Mady Hornig’s presentation, where she discusses some of the extraordinary work she’s done on other hard-to-understand illnesses. She’s very keen on bringing similarly innovative approaches to ME/CFS (assuming the current work doesn’t solve the illness!) – as I describe in my next article, Mady Hornig: How do you solve a problem like CFS?.