Simon McGrath explains how Mady Hornig is applying tools used to understand other complex illnesses in an effort to unlock the secrets of ME/CFS. 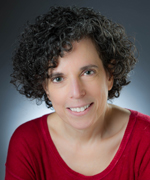 In a recent article I looked at the huge studies Professor Mady Hornig has underway looking for pathogens or signs of immune abnormalities in ME/CFS. While these are immensely impressive, I thought they were eclipsed by the main theme of her presentation: her jaw-dropping work in other illnesses. It took me a few attempts to fully grasp some of the more complex material, but I was left in a state of stunned admiration. And that doesn’t happen very often, as anyone who’s seen my posts will know. The prospect of her transferring some of these cutting-edge approaches to ME/CFS is mouth-watering.

Mady Hornig is Director of Translational Research at the Center for Infection and Immunity (CII), Columbia University, and her goal is to understand illnesses where brain and immunity are believed to take centre stage. This is an ideal fit for ME/CFS, given that most researchers suspect that the brain and/or immunity play a central role in the illness.

Why some illnesses are so hard to pin down

What was so fascinating for me about Professor Hornig’s talk was the sheer breadth of approaches used to tackle many different illnesses, all of which are, like ME/CFS, challenging to study. The progress made in these other illnesses gave me real hope that similar breakthroughs are possible in ME/CFS too.

Perhaps the best place to start is simply with the question: why are some diseases so hard to crack? In an ideal world, a pathogen occurs in every case of the disease, but never in healthy individuals. But real life is often not that simple, even where a pathogen is responsible for a disease. For example, 90% of people infected with the tuberculosis bacteria don’t develop “TB”, and it’s not entirely clear why not. Rubella virus can cause birth defects if the woman is infected in the first third of her pregnancy, but not if she’s infected later. 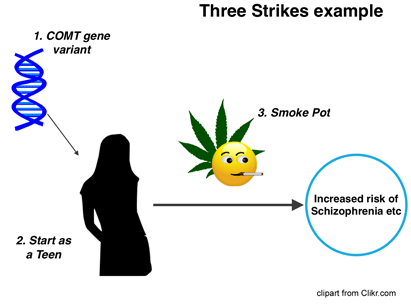 Mady Hornig has a “Three Strikes” hypothesis to explain may of these situations. She believes three things are all needed for some diseases to take hold: (i) specific gene variants, (ii) an environmental trigger and (iii) the right timing. A good example of the Three Strikes hypothesis is where pot-smoking in teenagers is associated with psychosis in adults – but only for those with a particular version of a gene. Pot is the environmental trigger, starting to smoke pot in teen years is the key timing (those who didn’t take pot until adulthood don’t have the risk) and the association only applies to those born with a certain version of a gene, COMT v158, where neurotransmitter regulation is impaired.

It’s easy to see how such a convoluted route to disease can be hard to unravel. If the trigger was a particular infection – or even infection in general – at a particular time, how can you find the link to something that happens many years later? This kind of ‘hit and run’ scenario has been proposed in ME/CFS, where it’s a particular problem because most ME/CFS cases aren’t diagnosed until several years after onset.

There’s some evidence for ‘hit and run’ in other conditions, where the damage isn’t seen for decades. Infection in pregnant women can be associated with illnesses – including heart disease and depression – in their children up to 50 years later. For instance, with Major Depression, Hornig and colleagues used blood samples taken from pregnant mothers years earlier, and found that cytokines – indicating a maternal infection during pregnancy – were associated with abnormal brain responsse in their depressed daughters 40 years later.

I think this work is brilliant. It’s about PANDAS, which are believed to be autoimmune disorders, triggered by bacteria, that lead to neuropsychiatric symptoms – and they occur almost exclusively in children. PANDAS are characterised by OCD, anxiety and even tics, where the symptoms come on very suddenly after a streptococcus infection (usually strep throat or Scarlet Fever). The underlying biology seemed to be that strep bacteria trigger ‘autoantibodies’, antibodies that attack strep but also happen to attack human cells, particularly in the basal ganglia in the brain. It’s not clear how the antibodies cross the blood-brain barrier, but that’s likely to be an important factor in explaining why most strep infections don’t cause PANDAS.

From children to mice

Hornig’s team used a mouse model to study the illness in more detail. They infected mice with the same bacteria that cause strep throat and found obsessive-compulsive behaviour similar to that seen in humans (for mice it includes repeated back-flipping). Crucially, they were able to show that mice produced antibodies against strep in the blood, but that these antibodies also bound to brain proteins. What’s more, they found deposits in the brains of PANDAS mice, and the presence of these deposits was linked to PANDAS symptoms. Maybe some pictures will help: 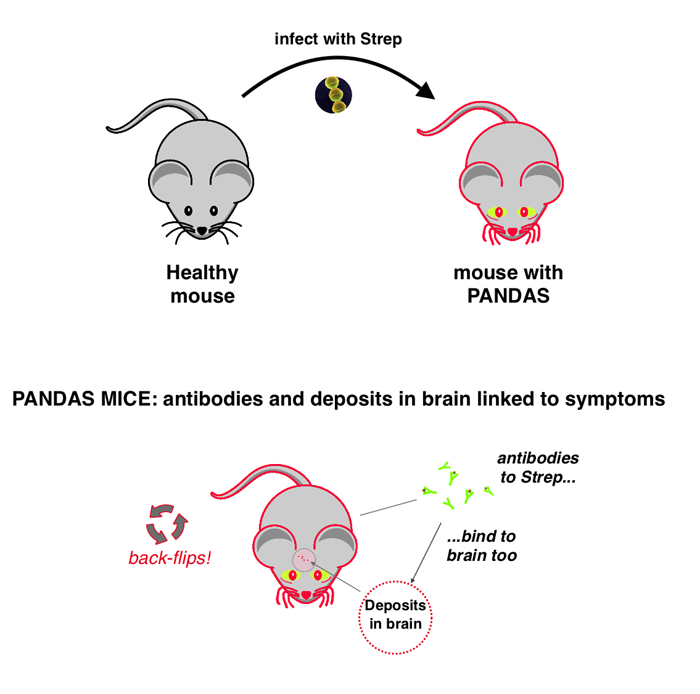 Next, they did something very clever. They were able to reproduce the PANDAS syndrome – back-flips and all – in healthy mice that had been injected with serum from PANDAS mice – no Strep involved. (Serum is the part of the blood that contains antibodies). Critically, they found deposits in the brains of these previously-healthy mice, indicating that antibodies from the serum had attacked the brain of the healthy mice, leading to the PANDAS symptoms. To make sure it was really the antibodies in the serum doing the damage, they selectively removed antibodies from the serum – and it could no longer induce PANDAS in healthy mice. (more detail) 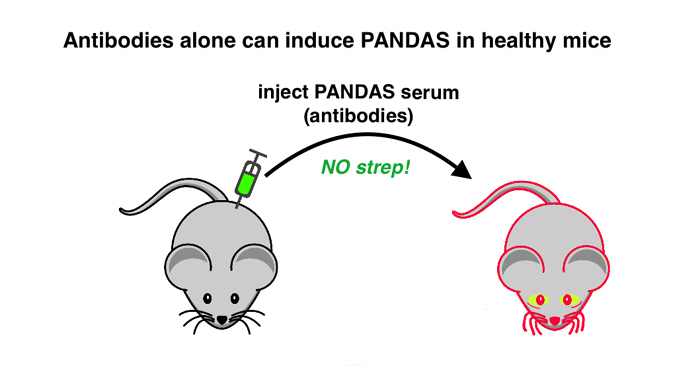 From mice back to children

Then they were able to identify the proteins in mouse brains that were being targeted by the autoantibodies linked with PANDAS. The proteins included two that are produced in response to stress (one is snappily called HSP-70). The team now returned to the children with PANDAS and looked at those children’s sera – and found the children’s sera (and antibodies) bound to the same protein, HSP-70, that was attacked in mice.

So Mady Hornig and her colleagues, including Ian Lipkin, started off with a human illness triggered by strep bacteria, then looked at that illness in detail in a mouse model, showing the key role of autoantibodies in the disease. And they found a likely target protein in the mouse brain for these antibodies. Finally, they completed the cycle by showing that children with PANDAS have sera that attacks the human version of the protein involved in mice. That is neat.

“We need our bugs”

Hornig stressed that ruling out unfounded proposed associations with illness is just as important as making new discoveries, so that researchers can move on. For ME/CFS, XMRV is the classic case. Mady Hornig also worked on the proposed link between measles virus and autism, and showed there was no association between measles virus in the gut and children with autism and gut problems. However, she did find that these children had alarmingly low levels of proteins needed to take up nutrients properly. The children also had an unusual mixture of gut bacteria, and many had significant levels of a bacteria known as Sutterella, which is rare in healthy people. So a study that began searching for a link between measles and autism ended up highlighting problems with the gut function and bacteria, a new avenue for research.

Mady Hornig says: “we need our bugs”, stressing the importance of understanding the role of the gut in many different types of phenomena, including cognitive symptoms and sleep. It turns out that gut bacteria play a crucial role in ensuring good quality sleep. Normally, as we digest a meal in the evening, chemicals produced by gut bacteria enter the blood and help us both get to sleep and stay asleep.  Who knows, perhaps there is a causal link between with the frequent gut problems reported in ME/CFS and the widespread sleep problems experienced.


Every illness is different and will require different approaches to solve. But I was impressed by the broad range of techniques, and sheer imagination used in tackling these other illnesses. Mady Hornig wrapped up her talk by saying “We are really committed to using all the tools that are available to us to try to find an answer” to ME/CFS. If Mady Hornig brings to ME/CFS research the imagination, innovation and expertise she’s shown with other illnesses, then I think the chance of substantial progress is very high.