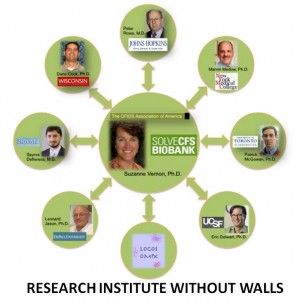 Virtually every ME/CFS research and non-profit is in the same fix – they’re big on ideas and short on money. The CAA, of course, has the same problem… even though, arguably, the needs in ME/CFS are larger than almost any other disorder, next to the big medical non-profits like the Susan G. Komen Foundation for breast cancer, they’re small fish, – and in the world of research foundations – they’re like little minnows.

The big list of to-do’s in ME/CFS (biomarkers, definition, funding, treatment, legitimacy) combined with the meager resources available, means the CAA (or any other CFS group) can’t get their job done by putting a dollar in and getting two dollars out. They need to put a dollar in and get 20 or 50 or 100 dollars out. (Thus far the CAA has gotten 7 dollars out in funded research for every dollar put in in their last grant package)

If the CAA is going to be successful they’re going to have to entice other researchers to study ME/CS without paying them, to enroll pharmaceutical companies to study drugs without giving them a dime, and to create opportunities for academicians without building ME/CFS centers.

The good news is the CAA’s research program is looking for ways to do exactly that. They’re learning from other non-profits how to maximize their efficiency and they’ve added a few unique twists of their own.

I talked to the CFIDS Association’s Research Director, Dr Suzanne Vernon about the CAA’s directions shortly after they released the list of new studies they were funding.  Dr. Vernon said  CAA’s research program was focused on being ‘nimble’, ‘cost-effective’ and ‘productive’.


The Rush to Make A Difference – The CAA is not alone in their desire to save money in what has become a tremendously expensive  research process. Many researchers and non-profits, who often have a personal stake in their representative disorders, have become frustrated with the high cost and slow pace of the traditional research process entails and have begun shredding traditional academic boundaries to get results more quickly. Some demand unusual amounts of collaboration between their research teams. Some are committed to the “Open Science” movement which facilitates the flow of information to as many parties as possible. All are committed to breaking down the ‘silo’s’ that have isolated one research group from another in the past.

The CAA is committed to all these options – one of the most important of which is their commitment to embracing the Open Science movement in medical research. 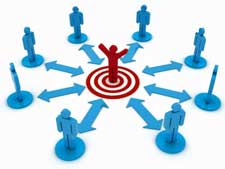 We are committed to the Open Science movement

Building Platforms for Collaboration and Discovery – The Open Science movement strives to share as much data as is practically possible in the recognition that doing so multiples the possibility of breakthroughs exponentially. The CAA requires their research teams to share data with each other at the earliest opportunities and BioBank, Patient Registry, Knowledge Base/Logosomos and Biovista projects are all designed to engage as many researchers as possible.

Opening Up the Vaults – Ultimately the CAA will open its Knowledgebase and Biovista drug discovery projects to all investigators. The CAA’s decision to take the list of prioritized biomarkers produced by the Knowledgebase project public and shop them around to academics and pharmaceutical companies flies in the face of traditional research efforts which keep their early findings in house but this is the way to grow the field as quickly as possible.

That’s how to get a lot more for the little money we have. Opportunity for discovery is increased by orders of magnitude when you’re working in an open environment. Getting on the Open Science wave and riding it is exciting….Suzanne Vernon

The KnowledgeBase database alone will contain all the studies and articles on CFS and allied disorders plus genetic plus gene expression plus proteomic data in a format that will allow all these different types of information ‘to talk to each other’. Outside researchers will then be able to query the database to guide their own projects. The Biovista project will find FDA approved drugs not now used by physicians which have the potential to help ME/CFS patients. Both these projects will continue to grow as new findings come out and are added to the databases.

From the Biobank to the Patient Registry to Logosomix we are creating data that is ripe to be mined. I believe CFS is ripe for discovery….Suzanne Vernon

Check out a video recounting how effective this technique was for a group studying cancer. This research group shared their early findings freely and in doing so managed to quickly come up with several possible treatments for cancer, some of which are entering clinical trials.

We seek to ‘download’ from the amazing success of the computer industry two principles, that of open source and that of crowd sourcing…Dr. Jay Bradner

Another prong of Dr. Vernon’s plan for success is building a ‘platform’ that will vault ME/CFS researchers into the mainstream..

The ‘Mainstreaming’ of ME/CFS Research

Its more about making CFS researchers part of the mainstream ..Suzanne Vernon

Taking something’ mainstream’ often has connotations of dullness and mediocrity but in this case it means just the opposite; it means finally getting them access to the vast opportunities the US and other medical establishments present. These include access to major grant opportunities, to large academic centers which have money to burn, drug companies , etc. – things that large disease groups take for granted.

Dr. Vernon believes getting to that level will require cleaning up some problems that have held back the field; the scattered efforts, the poor study designs (described as atrocious by one ME/CFS researcher), the lack of standardization and the lack of collaboration – so vital in a field in a field that needs to maximize its limited resources.

The kind of loosy-goosy approach to CFS that has prevailed thus far presents a huge cost in time and money … a cost that the small ME/CFS research field (and ME/CFS patients)simply cannot and should not have to bear. With so little money going to this field every study that is ends up being discounted because of poor study design or which fails to get validated because research teams use differing approaches, is a small tragedy. Something needs to be done and Dr. Vernon and a host of other researchers realize that and they’re beginning to do it.

A ‘Gold Seal’ for ME/CFS research

The CAA and CFI’s commitment to build the Biobank and Patient Registries to major league standards in itself will help show the commitment this field has to rigorous scientific inquiry. More importantly, for the first time in ME/CFS history major research efforts are working together to make sure that they all gather the same data (ie -translate well with each other). The Patient Registries/BioBanks at the CAA, the Chronic Fatigue Initiative (CFI) and the CDC are all asking the same questions of their CFS subjects.

We are all talking… Suzanne Vernon

Dr. Vernon clicked off a series of efforts to create standards in ME/CFS research…Dr. Bateman on measuring pain, Dr. Jason on post-exertional fatigue, Dr. Dane Cook on brain imaging, Dr. Biaggioni on the autonomic nervous systems – all have or are preparing reports on the best tests for ME/CFS.

Defining CFS – One of the biggest issues in CFS is how to define it and work is finally underway on this issue. Last year the ICC definition presented a consensus viewpoint of physicians and researchers on how to define ME. Now several efforts are using statistical analyses to pave the ground for a new definition. Dr. Jason is using the CAA’s Patient Registry and his own data and the CDC has partnered with 7 ME/CFS physicians to examine the way they diagnose ME/CFS patients to lay the ground for an empirically rigorous definition.

Turning a Corner – Dr. Vernon believes the ME/CFS research field is turning a corner for several reasons. One – the infrastructure needed to propel ME/CFS into a major research destination is being built at the CAA, the CFI and other groups. Two – partly because of the attention XMRV brought, the research community is beginning to understand how large the opportunities to make a difference are s in this mostly undeveloped field. (Dr. Boneva at the CDC chose CFS for just this reason. At the Ottawa Conference she stated she could be one of thousands studying HIV or she might be the person to make a difference in CFS) The enormous needs of the ME/CFS community are another draw for the right type of researcher. Dr. Vernon noted that if you find something in this disorder you can help a lot of people.

I am very excited about 2012, 2013, 2014… I think significant progress  will be made to improve the way research is being done and that will reap benefits for everyone…. Suzanne Vernon.

While the CAA is funding senior researchers as well, she pointed that of the five investigators the CAA is funding 3 are in the 30’s and 40’s…. They are young and hungry, they’re not as bound by tradition research approaches and they’re well up on the latest technology.

A Two Pronged Approach – the CAA, then is taking a two-pronged approach to accelerating ME/CFS research; (1) they and others are laying the groundwork needed to ‘mainstream’ or ‘mature’ the ME/CFS research field needs to give it access to major resources and (2) their emphasis on ‘Open Science’ to seeks to attract and enroll new researchers to the field.

For more on the CAA’s new studies