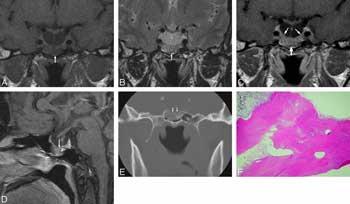 Empty Sella Syndrome: A Proposed CFS Patient Study – We propose a study to possibly characterize the first anatomical abnormality in CFS – empty sella. Adin suggested this study based on his MRI records showing that a filled sella early in the disorder and an empty sella later on. I know of another person who’s has substantial sella abnormalities as well and their clinical picture is strikingly similar.

The sella is a depression at the base of the skull that holds the pituitary gland – the master gland of the HPA axis.

MRI’s are used to characterize sella abnormalities. How could an empty sella been missed with all the MRI’s ME/CFS patients have done? A small depression in the base of the skull, it’s often simply not looked for. An empty sella (or empty sella syndrome ESS) does not always affect the individual’s health but when it does it looks suspiciously like ME/CFS…We think of this as possibly one small piece of a complex CFS puzzle. Dr. Holtorf believes all the HPA axis problems in CFS lie ‘higher’ up in the axis; either the pituitary or the hypothalamus.

Secondary Sella Syndrome – Some people have primary ESS – a developmental problem. We’re interested in secondary ESS. Secondary ESS occurs when the pituitary gland regresses or basically disappears or gets pushed out of the cavity or shrinks in it after an injury, infection (?), radiation or some sort of pituitary gland dysfunction.

Symptoms – Individuals with secondary ESS due to destruction of the pituitary gland have symptoms that reflect the loss of pituitary functions, such as the ceasing of menstrual periods, infertility, fatigue, and intolerance to stress and infection. (sound familiar?). Empty enlarged sella is also often combined with primary thyroid dysfunction, obesity and female preponderance.

The term empty sella was first applied to an anatomic finding at autopsy by Busch in 1951. He found that in 40 patients with no known pituitary disease, the pituitary gland was severely flattened against the floor of the sella (5.6 percent of the series)…This latter condition resulted in a partially empty appearance. Busch pointed out that an empty sella was far more frequent in females than in males (34:6).

Although contemporary series suggest that the presence of an empty sella is fairly common (8 to 35 percent of the population), fewer than a third of individuals with the condition ever develop symptoms. Clinical studies of the symptomatic patients with primary empty sella syndrome have revealed a variety of associated problems, and it seems likely that several etiologic factors are involved in producing an empty sella.

Several things may cause it but!!!! it usually shows up one fairly distinct group of patients……and guess who those people are…

Despite this diversity, patients with primary empty sella syndrome are a surprisingly homogeneous group. Over 80 percent of these patients are women, more than 75 percent are obese, and the majority become symptomatic in the decade from age 40 to 49, with over 80 percent presenting between 30 and 59 years of age.

Two very interesting facts – most are women and the abnormality usually presents itself in middle age..and there is an increased incidence of obesity. And then there are the symptoms….Take a closer look

However, subtle dynamic endocrine testing is able to reveal some degree of hypothalamic-pituitary dysfunction in up to 80% of the patients assessed. Only 31% of the patients were referred for endocrinological problems. In children evaluated for growth hormone deficiency, primary empty sella varies from 10% to 58%

Hyperprolactinemia and intermittent increases in prolactin (PRL) levels have both been associated with the primary empty sella, and as many as 25 percent of women with an empty sella have elevated prolactin levels.

CFS – almost all of these have been found in some degree or the other in CFS
Prolactin,for instance, is increased

‘Sex Differences in Plasma Prolactin Response to Tryptophan in Chronic
Fatigue Syndrome Patients With and Without Comorbid Fibromyalgia’https://pubmed.ncbi.nlm.nih.gov/20384451 Results: Women with CFS alone, but not CFS + FM, showed upregulated plasma Prolactin responses compared with controls. There were no differences among groups of men. https://phoenixrising.me/forums/showthread.php?4381-Sex-Differences-in-Plasma-Prolactin-Tryptophan-Response-in-CFS-with-out-Comorbid-FM

Conclusion – we’re not saying ESS causes CFS but if we can show that a higher than normal percentage of patient demonstrate ESS – then we’re talking biomarker territory and a documented physical abnormality. We’re committed to exploring this further and we will be asking around to see if there is a researcher who would be willing to look at patient MRI’s..

* Have you ever been diagnosed with Empty Sella Syndrome?
* Do you have an MRI of your brain? (we need to figure our which views are best).
* Do you have MRI’s dating back to before you were ill or were taken very early in your illness?
* If you have an MRI’s would you be willing to allow a researcher to examine it/them?