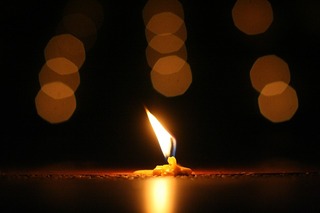 Hope is essential – especially when things look darkest. And yet, when you’re living with ME/CFS, stirring up hope can be the hardest thing to do.

Hope can be a double-edged sword that can loosen your bonds, or savage you when you wield it. Having hope is no guarantee of success. Daring to hope can feel like you are setting yourself up for the possibility of more pain. And let’s face it, you are.

Fanning that wee flame takes the courage of a warrior. It takes a certain recklessness that can be in short supply when you feel surrounded by the darkness that is ME/CFS.

As I’m hunkered down bracing myself for more disaster, raising my head can seem like the ultimate in foolishness. What if the good things I am setting my sights on never happen? I was broken before. Will I now find myself shattered into pieces, ending up in an irreparable state?

Nobody can know the answer to this, when contemplating that courageous, and possibly self-destructive, move.

When you can’t get up from your bed, the idea of rising up can seem ridiculous. Maybe you’ve forgotten how. Maybe every time you’ve done it before, you’ve been slammed back into a worse situation than you were before.

That is the dilemma. There is no guarantee that hope will be fulfilled. But without it, I was almost assured of staying where I was.

For a long time, I had no hope of things ever changing. One day dragged after another, each one dreary and heart-breaking. My waking hours of effort were spent on things like breathing and trying to stop the vibrating, the nausea, the whirling vertigo.

Will I chance a shower? Is there a point to wearing myself out by getting dressed? Eat something. Sit in a chair, if I was lucky. Drag back to the bed when the interminable day is over. To sleep … or not.

To live like this for weeks, months or years, bound by the chains of ME/CFS, changes a person. The lauded plasticity of the brain seems only to work in reverse as your mental powers and thought patterns seem only to shrink and atrophy.

When a bad ME/CFS crash gradually subsides, you can’t remember who you were before it hit. Or maybe you are able to remember that good things used to happen, that you were at one time capable and productive. But it can seem as if these memories are not really your own; it can feel like you are thinking about someone else’s life.

Were you ever strong, active, happy? Can you ever be so again? How do you get there from where you are?

The road seems unclear, the means out of reach.

I spent months in bed, rousing only to drag out to the family for short periods, and only on “good” days. I progressed to sitting in a chair, staring out a window at a world that had forgotten me and was now irrelevant to me in my new life as a vegetable and cripple – too sick to read a book or watch TV – well enough to be suffocated by the endless sameness of empty days.

Eventually, I was well enough to rail against the void. For several years, I would spend my evenings in my bedroom, after managing to eat dinner with the family, talking to myself.

My conversations were repetitive and full of rancor and anger. I complained about the unfairness of my fate. I felt shame and guilt about the possibility that I somehow had done this to myself, at my inadequacy in being able to pull myself together and take care of my family.


After a long time, all this venting brought me to a kind of crossroads. I had no idea how to get out of this mess. I had no energy to follow a plan if I’d had one. But somewhere, my direction changed. And I decided to … expect things to get better.

It sounded foolish even to myself. How could expecting improvement lead to anything but frustration and disappointment?

I didn’t have an answer to that question that brought any comfort or reassurance. I just knew I couldn’t go on like this in the unrelenting dark.

So, metaphorically speaking, I lit a candle. Would it be snuffed out? Would the dark seem even blacker as a consequence? I didn’t know.

As time went on, my little candle was extinguished more times than I care to remember. Really, I can’t remember. I just know that it was one step forward, then plummeting back all the way down, over and over again.

My hope, in retrospect, became a life line. I didn’t get any quick rescues, didn’t find myself suddenly being pulled up into the light into a better day. But I knew I had to change my mind, re-direct my thoughts into a new path. I had to believe that maybe my life would get better.

As it happens, things did improve. I’d like to say that I found myself in a better place just because I believed it could happen. That this will happen to you too. I can’t do that, in all honesty. And to say so would not be fair.

As I said before, there are no guarantees. But the only certainty if I gave up on hope was that I would probably stay where I was. Not a guarantee I wanted to live with.

How does hope improve things? I don’t know that either. It’s not like pushing a button. It’s not like getting a new and readable map. But it did sometimes make my days lighter. Telling myself that things would not always be like this sometimes made the burden of being alive easier to bear.

For me, two of the things that made a difference were finding a proper diet that worked for me, and stumbling upon a naturopath who was compassionate and who wanted to help me above and beyond the norm. It was learning how to rest, and to take small steps. It was being in contact online with people who cared about me. Some of those people I found on Phoenix Rising.

I have to believe that as each of these pieces to my puzzle fell into place, they became possible in part because I hoped for them, because I was open to and looking for the possibility – even though I knew there were no guarantees.

Even during the dark times in limbo, even when all that this hope was doing for me was suggesting that this grief was all temporary, having hope made it easier to survive in the dark. And that in and of itself was better than where I’d been for so long.

Are you able to hope?