Ryan Prior recalls why he and Nicole Castillo decided to make a movie about ME/CFS, and explains why they’ve now decided to form the Blue Ribbon Foundation as a new non-profit organization 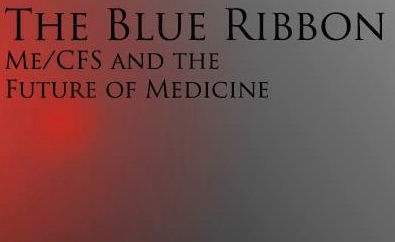 A year ago, I wrote a story for USA Today about my experience with ME/CFS that changed the trajectory of my life. The response to my story taught me just how neglected the ME/CFS patient population is. My plan after graduating from the University of Georgia had been to write about politics. I thought I would move back to Washington to work as a political journalist or as a speechwriter for a congressman or senator.

But my story on ME/CFS kept tugging at me. If I didn’t become that political writer, there was still a long line of applicants behind me who could easily and eagerly take up that mantle. To me, it felt far more exhilarating to break new ground and make a documentary. It was exhilarating to feel this work would never get done without myself and others making a conscious decision to do it.

That’s why Nicole Castillo and I set out six months ago on the journey of a lifetime. I was transforming from writing on politics to making a movie on microbiology. But Nicole was coming home. Her dream was to make documentaries on medical or social justice topics. And what better chance to fulfill her dream than to tell the great under-reported medical story of our time?

So far we’ve shot footage in California, Nevada, Alabama, Georgia, Florida, North Carolina, and the District of Columbia. We’ve filmed with bedbound patients, homebound patients, and with many of the top experts in the ME/CFS and neuroimmune field: luminaries like Dan Peterson, Andy Kogelnik, Staci Stevens, Chris Snell, Mark Van Ness, Judy Mikovits, Charles Lapp, Nancy Klimas, and Gordon Broderick. We’ve also shot footage with an even longer list of brilliant researchers whom many patients don’t know yet. For instance, there’s Ron Davis, one of the men who very nearly invented the field of genomics, who is facilitating ME/CFS genetics research at Stanford. Then there’s William Pridgen, who is leading a clinical trial on a new drug combo targeting herpesvirus with the University of Alabama.


We set out to make a film that would inspire people. And we think 21st century medicine is the best way to move the masses. As we look back at the footage, I like to think this is going to be the kind of a movie that a 15-year-old could watch and decide immediately to become a scientist. This stuff is that cool. Throughout history, science has always made strides to improve human life, and this story is no different. As Dan Peterson said in his interview with us, “I’m a believer in the model, we just haven’t gotten there yet.”

But making the movie is only half the battle. Making the movie matter is the other half. To be sure, we still plan on distributing our film through film festivals, DVD, Hulu, iTunes, and Amazon. Additionally, we’ve had 40 individuals or groups from six nations sign up to stage screenings in their own communities. We think we can get that number to 300 in the first year. Folks from Vancouver to Sydney are ready not just to see the movie, but to really use the movie to create change. We often say this isn’t just a movie; it’s a movement.

Stage a Screening in Your Community

And it can be a highly targeted movement to the people who need to hear its message most. That’s why we decided to incorporate the Blue Ribbon Foundation as a 501(c)(3) non-profit organization to lead a three-pronged mission in awareness (the documentary), education (the Blue Ribbon Fellowship), and fundraising for research (Step Up for ME). We want this film to have an immediate impact for families, nurses, doctors, local organizations, and large-scale advocacy initiatives.

Nicole will serve as the first Director of the Foundation, I currently serve as president of the Board. Other members of our Board of Directors include:

First, numerous healthcare filmmakers have partnered with Continuing Medical Education (CME) providers so that doctors and nurses who watch their films can receive CME credit. We’re embracing that. It’s the perfect incentive to engage the medical community. Much of the educational material physicians would absorb from The Blue Ribbon would pertain to the definition (with an emphasis of the Canadian Consensus Criteria), prevalence, symptom severity, bio-markers (low NK cell function, immune dysfunction, low V02 max, mitochondrial dysfunction, etc.), cost to society, latest therapies (such as antivirals), and coping mechanisms.

Second, we would like to create a system and an information package by which patients can systematically distribute the film via local support groups so that patients can partner with their physician in seeking adequate care. Such a package might give patients a set of talking points in how to direct the conversation. It would provide doctors with brief, yet detailed information that could prepare them to watch the documentary, receive CME credit, and better help the patient.

Third, we have been laying the groundwork for a medical fellowship by which current medical students can spend their summers studying and researching at the top ME/CFS institutes in the world. The Blue Ribbon Fellowship will enable them to experience the thrilling sights and sounds we get to experience on the film set every single day. They’ll get a glimpse into the future of medicine, observing and participating in innovative collaboration spanning Big Data, gene expression, molecular biology, and translational medicine.

Both the Blue Ribbon documentary and the Blue Ribbon Foundation strive to reach doctors at each stage of their careers. Practicing doctors can receive CME credit. Future doctors can apply for our fellowship program, a program that could inspire and equip them to build a career and a practice fighting neuro-immune diseases.

The Blue Ribbon Fellowship proposal calls for $50,000 to fund ten fellows for eight-week summer internships funded at the rate of $5,000 per student. At a time when many of the first generation of the ME/CFS pioneers is nearing retirement, we believe the Blue Ribbon Fellowship program delivers the best bang for the buck to light fires in the minds of the next generation of neuroimmune visionaries. In a future article for Phoenix Rising, we’ll outline our new initiative, Step Up for M.E., which will empower patients, families, and communities to build awareness and help raise money for research, each in their own unique way. Together we can team up to make CME credits, physician education, and the Blue Ribbon Fellowship a reality.


This is our vision not just for making a film, but for implementing an innovative, scalable, and sustainable approach to 21st century physician education.

To support the documentary or its educational initiatives, please visit: www.mecfsdocumentary.com or www.theblueribbonfoundation.org