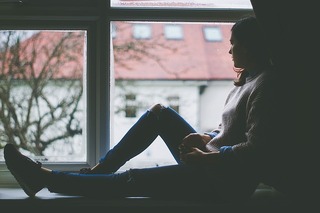 From time immemorial, people have been pushed aside and ignored for one reason or another. Nobody likes feeling invisible. That goes for the kid in the playground who doesn’t get chosen for baseball, for the person overlooked by the boss, whose name is left off the group photo.

It’s also true for people who are sick, but don’t look like there’s anything wrong with them.

Lisa Copen founded Rest Ministries in 1996 after being diagnosed with rheumatoid arthritis. She went on to establish Invisible Illness Awareness Week in 2002.

Lisa has made a difference for others who are ill, and has helped to create a community for herself and others in the same boat, cut off from the rest of the world.

She wasn’t going to be invisible, and the hordes of other sick people suffering in silence, often without acknowledgement or help, were not going to be invisible either. Not if she could help it. And over the years, both her vehicles have shown great staying power and growth. People like Lisa have helped the invisible illness community immeasurably.


Many conditions are described as being invisible because the effects are not obvious to the casual observer. ADHD, allergies, asthma, autism, brain injuries, celiac disease, Crohn’s disease, depression, diabetes, epilepsy, fibromyalgia, IBS , lupus and ME/CFS are just a few of the invisible illnesses and disabilities.

Disabled World reports that almost 50 percent of Americans contend with some kind of invisible condition.

As you and I know all too well, there’s invisible, and then there’s invisible. And ME/CFS is invisible in another way as well. It is still ignored by most of the powers that be … treated as if it doesn’t exist. The research isn’t forthcoming, the honest evaluation isn’t there and misdirection and maltreatment for vulnerable patients abound.

Some invisible illnesses are more invisible than others, and we know that better than most. When ME/CFS is talked about, it’s a crap shoot as to whether it’s going to be anything we can stand to hear.

Will we be denigrated because many of us can’t work or take care of ourselves? Chastized for not pulling our weight? Given the cold shoulder because we don’t help with Christmas parties and family get-togethers?

Surely what we are saying can’t be true. Nobody can be THAT sick. An hour of some kind of effort surely doesn’t put someone to bed for months at a time. What is this game?

So an unwelcome invisibility and lack of acceptance, lack of respect, has covered us like a cloak.

About 65 percent of Americans who search online for answers have one or multiple chronic conditions, according to the Pew Research Center’s Internet and American Project.

Events and pushes like Invisible Illness Awareness Week are a way for us to step up — even if we cannot physically stand — and be heard. They are a way for us to join forces and no longer be stuck alone in a bedroom or staring out a living room window on an unconcerned world that is passing us by.


This era of electronic gadgetry makes it possible for even some of the weakest and brain-disabled of us to reach out and make contact.

We talk to each other. And we talk about each other. We are shored up by support and have the temerity to open our mouths to people in our own small “real” worlds.

We stop apologizing so much. We say why we can’t come, or go, or work. We describe our symptoms to people who want to hear us.

We begin to believe once more that we have a right to take up space and to use up resources, to have an impact on those around us, just like a “normal” person — or just like we used to before being enshrouded by an invisible illness.

We join forums and have conversations about how we manage our difficulties, how we feel about being overlooked, what our cat did today that was so funny and is it safe to colour my hair?

And we turn to face that outer world with our Awareness Weeks and expect our voices to be heard, expect our struggles to be respected, expect some action to be taken on our behalf.

The theme for this year’s Invisible Illness Awareness Week is “This is Chronic Illness.”

Think about marking this Awareness Week of 2016 by writing about your illness or making a video. Put what matters to you on your Facebook page, on Illness websites, on blogs and forums. Some of you have already been doing this for some time. Keep going.

If you share your story someplace online, sending a link to the Invisible Illness Awareness Week’s Facebook page would be great encouragement for Lisa and friends.