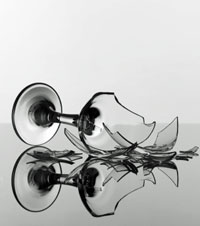 The Buddhist law of impermanence – that nothing is permanent – that everything changes – is like that. Is suggests that you can’t count on anything…and you really shouldn’t try because at some point it’s all going to disappear anyway. Your health, for instance, is going to disappear completely at some point. That’s a guarantee! There are no other guarantees; there’s no guarantee, for instance, that while you live you’ll be healthy or without pain or live in the circumstances you wish. That guarantee, unfortunately, did not come with the package.

At the end of the chapter Toni refers to ‘broken glass’ practice which is based on the realization that we are all glasses which will eventually be broken; i.e., brokenness or ‘ill’-ness is baked into and is an inherent part of being human. It may come earlier or it may come later; it may last a long time or a short time but it’s part of the package; if you’re human you’re going to have to deal with illness, physical decay and parts that don’t work the way you expect them to.

Given that we are physical beings; i.e. we operate in a physical world, it stands to reason that some part of us are going to have parts that don’t work very well, and, of course, we know this to be true. At any given time, for reasons of genetics, ‘accidents’ (bumping up against a pathogen at the wrong time), aging – whatever – a pretty significant portion of the human race has some parts that don’t work well.

It’s upsetting personally to be ill – but it’s also part being human and that’s a very useful thing to understand in a world when anything can happen to anyone at any moment. Of course, we’re fine when something good happens – we can usually handle that kind of change – but when something we interpret as ‘bad’ happens, we tend to protest, get upset and rail at the way we’ve been treated (as if the world were targeting us, in particular). That leaves us in a state of dissonance with the world; it is one way and we are stuck protesting that it shouldn’t be that way; and the more we protest, the more out of sync and frustrated we become.


Given that bad stuff such as illness happens, and it happens pretty regularly, it would behoove us to find a way to give it a place. But how to do that? Toni points to a saying by Zen Master Dogen to suggest one way.

“Without the bitterest cold that penetrates to the very bone, how can plum blossoms send out their fragrance all over the universe?”

Let’s try to translate this into ME/CFS.

“Without experiencing this bitter disease that penetrates to the very bone, how else could people with ME/CFS have sent out ??? into the universe?”

For me this is one of the most difficult questions to ponder. It’s so easy to get wrapped up in the difficulties this disorder poses and if truth be told we’re more a culture that looks for what’s wrong than what’s right and you have to really dig deep to find what is ‘right’ when you are ill.

Something can be had from every experience, however (“the bitterest cold is necessary for plums to flower”). Toni asks the question, “what has CFS allowed to flower that might not have flowered otherwise?”

Toni mentions a love of classical music that she would not have developed otherwise and an appreciation for the ‘smaller’ (or perhaps the larger?) things of life that get lost for most of us in the ‘doingness’ and the rush of everyday life. She’s certainly not alone…..Elizabeth Tova poignantly demonstrates an amazing world that opened up when she focused on the world of a snail after her disabling brush with a virus in her book “The Sound of a Wild Snail Eating”. That is a lesson that our sometimes frantically busy society could learn.

Switch – In doing so both women shifted away from a sense of fulfillment based on doing and achieving (our normal mode of being) to a sense of appreciation of the basic elements of life…. beauty, relationships, the work of others. We see Toni make the shift as we watch her pain and upset at not being able to be with family members slowly dissolve away as she focuses instead on the love she feels for them.

These weren’t easy transitions; they took work – mental work – mental training to shift the mind out of its prevailing mode of despair and upset. Training the mind, though, is really what this book is about; it’s a kind of training manual that provides lessons in “How to be Sick”. . . it’s about ways to make the plum flower bloom in the midst of winter.

I wonder what kinds of spiritual strength one can gain from a focused grappling with these difficult lessons. With negative thoughts leaving one frustrated and upset (and with less energy), how about viewing CFS as a playground for enlightenment?

That’s a kind of ‘flower’ that ME/CFS might bring forth in someone which might not bloom if they were in a different situation. What about developing a keen sense of acceptance for things that are out of our control – letting go of what we thought should happen – and simply accepting what did? In most cultures that’s called wisdom but wisdom is not something we learn about in schools anymore.

The idea that anything can happen at any time is unsettling, but for me there is a nugget of gold hidden in this realization and I think it particularly hits home in a disorder like CFS with all its variable symptoms. If anything can happen at any time, if everything really is variable, if one’s symptoms, thoughts and feelings really are ultimately transient – what is left?


The person or being experiencing that variability. The idea that we are not our low energy levels, our symptoms, our thoughts (e.g., “this is wrong!”) 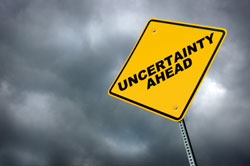 or feelings (despair, frustration, anger or ambitions) … is the hidden nugget for me. Our problems occur when we mistake a thought for reality. For instance the thought that it’s wrong to be sick commences a string of other thoughts (this shouldn’t be happening, I am somehow bad or damaged)….that drive a host of negative feelings (anger, frustration, despair) that can overwhelm us, leaving us in a dark place.

One way Toni resolved this cycle of negative thought was to simply observe the rise and fall of thoughts, thus allowing her to treat them more lightly and get less wrapped up in them, in effect, allowing them to blow past like the weather they are. (If we are chronically angry, frustrated or upset, the thoughts certainly seem ‘permanent’, but this is because we keep reenforcing them.)

“I work on treating my thoughts and moods as wind, blowing into the mind and blowing out. We can’t control what thoughts arise in the mind, and moods are as uncontrollable as thoughts. By working with this wind metaphor, I can hold painful thoughts and moods more lightly, knowing that they will blow through soon…”

It’s not that the painful thoughts and moods disappear, but that they lessen their grip and their time with us diminishes; they blow through and around us – but like the weather, they are not ‘us’.

I recently went through a day just watching my thoughts come and go labeling them simply as thoughts. I disregarded their meaning – they weren’t good or bad or right or wrong – I just labeled them as thoughts . They were the wind blowing through my mind and as I did that, they began to disappear and my mind began to clear – I began to reappear, rested and calm.