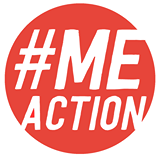 Jen Brea is a phenomenon. After working as a freelance writer in China and Africa, she enrolled for a PhD at Harvard in political science but, four years ago, got sick. She had a fever that lasted ten days.

Her health collapsed, and she was forced to go on medical leave. She got married, but was too ill to say her vows.

This was her entry into the world of ME/CFS. But fortunately for us, she had the skills, connections, support and attitude to use social media to do amazing things.

First, in October, 2013, she launched a crowdfunding campaign for a documentary about the disease. The footage that she’d already put together looked amazing.

Then, despite being stuck in bed, she started Thrive Show, a Google Hangout series about living well with chronic illness.

And now, with co-founder Beth Mazur and site admin Rachael Korinek, she’s launched another exciting venture: #MEAction. It’s a platform that patients, advocates and organisations can use to get the international community behind them.

Thanks to Jen’s profile in the community, it has a ready-made audience, and one that we can expect to rapidly grow. Finally, we have a chance to exert our strength in numbers.

“We were founded with the belief that while we may find it difficult to advocate for ourselves in the physical world, in the virtual world, we can be an unstoppable force.” – Jen Brea

This issue of little groups of patients scattered here and there across the globe and never coming together as a force for mass action has been a longstanding problem for ME/CFS. It’s formed a major barrier in getting our disease treated on an equal footing with comparable conditions such as MS and lupus.

#MEAction aims to stop all that. Already, it’s launched or promoted a number of advocacy, fundraising and research initiatives, including:

There are three main ways that you can use the platform.

You can find like-minded people to work on advocacy or fundraising projects by listing your skills and ‘dream projects’ in the #MEAction membership directory. You can propose new action plans, issue calls to action, and connect with other members in the Action Centre. And soon, you’ll be able to start up a local group or one organized around a theme or a cause.

You can start a petition. You can organize an event, such as a fundraiser or a march. Soon you’ll even be able to crowdfund.

This really does seem like the beginning of something big, and our whole community can join in to grow it. There are millions of us worldwide and it’s time for us to come together as a force for change.

Imagine the day when a crowdfund is announced and we can raise millions a year instead of thousands. Imagine when we can hit our governments with a tsunami of protest.

This is the way that we’ll get equality, so let’s go to it. Visit the site, join in the actions, start up your own. Follow the lastest news on Facebook, Twitter and Google+.


Register on  the site to get upcoming weekly emails.  Volunteer to help them.  Tell other patients, your family, your friends.