For Jody Smith, the ticking of a clock was enough at one time to chase her back to her bed. But with the passage of time, she has been able to reclaim her living room … 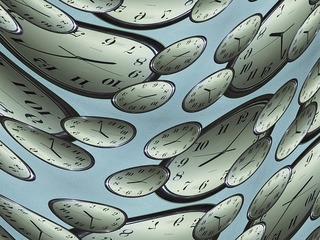 I have two clocks in my living room. One clock is on the wall across from where I usually sit at my computer. The other is on the wall to my left. I guess this might be an unusual arrangement, not to be found in most homes, but it has been practical for me.

I have had long intense bouts of what I have called tendinitis over the years, affecting my neck, shoulders, arms, hands, legs and feet. My guess is that this is part of my particular brand of ME/CFS, but who knows.

Depending on what area was crippled at any given time, being able to see a clock has been wholly dependent on its location. Sometimes I haven’t been able to turn my head to the left, other times to the right. This setup has meant that I can always see what time it is.

In some ways having a clock within view has been pointless not to mention frustrating. After all, when I’m incapacitated it’s not like I’m going anywhere other than bedroom or bathroom — and that as seldom as possible. But when time seems to drag interminably, being able to see the hands gradually moving reminds me that time is also moving as well. And in a way, it has helped.

I often had to retreat to my bedroom in those days to protect myself from the shattering, jarring effect that any noise had on me. That included conversation, music, TV and noises outside.

This particular morning, though the house was quiet by most standards, I became all too aware of the ticking of both clocks. I don’t know why it hadn’t messed me up before that day, I just know that on that morning, I could hear both clocks ticking … and since they weren’t in sync with each other it was like each second was being marked twice. And the sound felt like it was drilling a hole through my head.

My husband Alan wasn’t even aware of the sound until he saw the tears running down my face. I told him I was going to have to leave the room and go to bed. His response was to take both clocks down and pull out their batteries. I was touched that he’d prefer to go without knowing what time it was rather than have me cooped up for even more of the day than I usually was.

Mind you, it’s not like he cared that much about being able to see the time at any and every moment of the day, like I do. But even so, the fact that he took action in order to protect me made the tears flow more heavily. And this time it was out of gratitude instead of despair.

People dealing with such sensory challenges when living with a chronic illness like ME/CFS can run into major hassles anytime, anywhere. Very few people are aware of this. I certainly was ignorant of such things before it happened to me.

I am thankful to be living with a man who takes my word for it even when he can’t hear or see the problem himself. We all need more people like this in our lives to be our champions and protectors, who want to take care of us with no strings attached.

Those clocks were stored away for several years. After a period of very slow improvement and recovery, we brought one back out to see whether I could be in the same room with it or not. I was thrilled to find that it didn’t pose a problem for me anymore.

We thought maybe one clock was enough, thought maybe we could be more “normal” and not have clocks all over the walls. That lasted for awhile, until I got hit with another string of crippling tendinitis, first on one side and immediately following, on the other side. We decided being normal wasn’t as important as having things set up so they worked for us.

The tendinitis seems to have eased up, due to acupuncture, chiropractic, and also due to changing the chair and computer arrangement I’d been working with previously. I don’t know if I’ll get hit with it again in the future or not, but I haven’t been crippled for quite awhile and I am hopeful.


But I still want two clocks in my living room. Partly as a guarantee that no matter what I can always see one of them, crippled or not. But they’re also like trophies. They represent a battle that so far I have won — they no longer chase me out of the room — and I like to look up at one or the other of them and remind myself of this.

Have you had seemingly small things present insurmountable problems in your daily life due to ME/CFS?