A Very Unrewarding Ilness: CDC Study Suggests Reward Center of the Brain is Rather Quiet in CFS

Chronic fatigue syndrome does appear to still be something of a hot media item…The latest CDC study made the news before it was published or even presented at a big conference. (This study was actually presented at the IACFS/ME Conference but somehow it didn’t make it out to the news wire there :)) 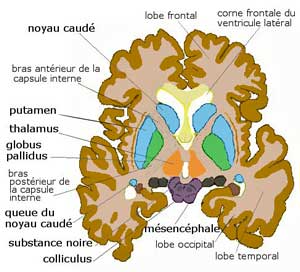 This study found that blood flows to the basal ganglia, a part of the brain involved in both motor activity and reward (what a combination)…was significantly reduced in people with ME/CFS during a card game. .Importantly, the more severely ill patients had low bloods to that area of the brain.

The study suggested that not only was ME/CFS a miserable disorder to have but that the portion of the brain that guides movement was tweaked…The news story focused on the ‘reward’ aspects of the basal ganglia but basal ganglia problems also play a role in other severely fatiguing disorders such as Parkinson’s and multiple sclerosis.

Dr. Unger, the CDC CFS chief, was saying all the right things “Every carefully controlled scientific study on CFS helps raise the credibility of this very complex illness. Even though our findings are preliminary . . . they do support a biologic [theory] about this illness.”

“A strength of the study is that we used some of the newest technology available to look at the function of regions of the brain that may be involved with CFS,” she said. “We hope the impact of our study will be to encourage further basic science investigation of CFS.”


We covered Andrew Miller’s presentation on the CDC study at the IACFS/ME conference here. Miller focus was a bit different and he believes that an infection may very well have triggered the basal ganglia problems in ME/CFS.

Increased levels of oxidative stress is one of the more consistent findings in ME/CFS and it turns out – in fibromyalgia, as well. This small Spanish study found significantly reduced rates of COQ10, hugely increased rates of oxidative stress (lipid peroxidation) and, in a finding which suggested that the mitochondrial were not working so well, reduced ATP production. COq10 plays an important role in cellular energy (ATP) production. Treating the FM patients with 300 mg/CoQ10 a day for three months resulted in increased COQ10 and ATP levels (but still below the levels of healthy controls), greatly reduced oxidative stress levels and reduced headaches. The authors noted some evidence suggests oxidative stress may play a role in migraine….

The catch in this study was that particularly with regard to the treatment arm (10 patients) it was very small but it does validate some anecdotal reports. CoQ10 is one supplement which seems to be almost universally prescribed by ME/CFS specialists. Its no cure but this study suggests it might definitely worth a try…If you do try COQ10 give it a couple of months..

There are times to turn pain signals off (during a fight for survival, for instance) and times to turn them on (to clean up your wounds after your fight for survival). The ‘homeostasis’ of pain involves turning the pain producing systems at the right times and inhibiting them at other times. ‘The problem with FM and other similar disorders (including to some extent ME/CFS) is that the pain signaling system both seems to be constantly turned on while the activity of the pain inhibiting networks appears to be reduced.

Using functional MRI’s (fMRI’s) they evoked pain in FM patients and healthy controls and then looked to see which parts of their brains were most activated. They found that the connections between key areas in the brain that are believed to inhibit pain – called the Descending Pain Modulatory System (DPMS) were impaired.

Networks- This is another example of researchers looking at ‘networks’ rather than focusing on how single organs or single parts of the brain function. In this instance it appears that inhibitory signals in this pain network are not through because somehow the connections between the different areas of the pain network have become frayed. Interestingly, the researchers are looking at several sections of the brain that have popped up in ME/CFS lately; the anterior cingulate, the hippocampus and the amygdala all of which network with the dorsal horn of the spinal cord (another possible connection.)

Interestingly, the presence of anxiety or depression didn’t have any effect on connectivity issues in FM; this decreased connectivity and increased pain is an FM issue – not a psychological one. 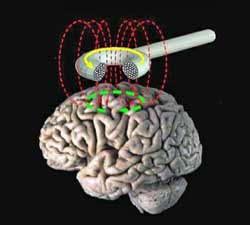 A recent study suggested that migraine is actually very common in ME/CFS and its well known to be associated with fibromyalgia as well. Now a new study suggests that a brain stimulation technique being studied in FM called transcranial brain stimulation (which Dr. Clauw has high hopes for) may be able to actually prevent migraines for months at a time. Amongst the brain regions stimulated were several of interest in ME/CFS including the insula, anterior cingulate, thalamus, and brainstem regions.  Below is a report on what Clauw had to say about this instrument at the Ottawa Conference.


In general using this mild brain stimulator, which affects the deep brain layers, reduced the frequency and severity of migraines. An intriguing aspect of this technique is its relatively low cost; the stimulator runs on 9 volt batteries and theoretically could easily be used at home. Unfortunately market application of the stimulator is still years away.

The ‘Brain Zapper’ – Clauw is quite hopeful about a technology called transcranial magnetic stimulation (TMS) that appears to be helpful across a wide variety of pain conditions. TMS consists of a very small electrical current ……via electrodes attached to the scalp in two 15-minute treatment sessions a week for 10 weeks. It appears to be modulating the activity of the regions of the brain involved in producing pain and appears to be relatively safe and non-toxic.

TMS is being tested right now and, if the preliminary data holds up, the device could revolutionize how pain is treated. Another plus is its relatively modest cost; the machine costs a mere $25,000 – peanuts compared to many technologies – with a ten week course rolling in about $2,000. From efficacy, cost and safety standpoints, the ‘brain zapper’ appears to be very appealing at this point.

A 2011 FM study concluded that TMS resulted in “long-term improvement in items related to quality of life (including fatigue, morning tiredness, general activity, walking, and sleep).

The Lion Stirs- Treatment Primer on the Way

The slumbering lion – the professional association for CFS (IACFS/ME) is stirring. This organization has the potential to make a huge difference in CFS by providing an alternate voice to the CDC and NIH…Its the only organization that could effectively do that, and they are starting to do that.

In its April newsletter, the IACFS/ME stated a that a treatment primer for CFS, developed by and for ME/CFS professionals , will be released in May – positioning the group to play a key role in treatment policy in the US. Up until now the CDC, with its CFS toolkit, has been the group physicians and medical groups look to for advice. Now they’ll have an alternate source – something that’s been sorely needed for years.

With Dr. Unger using some of the same ME/CFS professionals to inform the CDC’s treatment ideas, it’ll be interesting to see how different the two ‘primers’ are. The CDC reportedly will be finished with changes to its toolkit by the next CFSAC meeting in June. The IACFS/ME primer took two years of volunteer work.

Having trouble paying for your meds? Pandora joins with NeedyMeds to help patients find sources of cheaper meds in this May 2nd webinar – that’s today! https://www1.gotomeeting.com/register/187526472 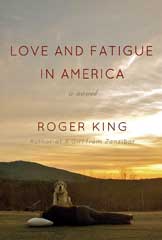 Love and Fatigue in America – Author Roger King found some great material for his latest book; unfortunately for him it was chronic fatigue syndrome and he was the subject…Love and Fatigue in America charts a British author’s course as he learns about it and his new country – the US – at the same time. This often comic look at ME/CFS has gotten some excellent reviews. CFIDS Association talks with him about it and his experiences in a webinar on May 9th – https://www.research1st.com/2012/04/15/may-9-webinar/

The Feds are Meeting: CFSAC Happening in June

The federal advisory committee for chronic fatigue syndrome (CFSAC) will be meeting on June 13th and 14th at the Department of Health and Human Services, Hubert Humphrey Building, in Washington DC. Until it is published in the Federal Register they are not taking requests to present during assigned public testimony periods. The good news is that, for the first time in about a year, the meeting will be webcast live.

To my knowledge you cannot sign up for speaking slots yet. Check out the CFSAC website here.

Prohealth Supports ME/CFS Organizations –No surprise there. Prohealth was created by a person with CFS, Rich Carson, to bring supplements to the CFS community at lower costs and Rich has given generously to the community over the years. What’s different this time is that your vote will determine who gets the extra bucks. Go here to vote for the ME/CFS Community Center, Simmaron Research or the IACFS/ME. (Go all the way down the page to find the polls. ) The winning organization gets a portion of the proceeds from sales on two days in May. Right now Simmaron is ahead (169 votes) with IACFS/ME and ME/CFS community (around 100) in second.

PANDORA Raffle for SUAM – Prohealth isn’t the only group supporting CFS non-profits. Pandora is holding a raffle, some of the proceeds of which will go to benefit the Speak Up About ME event bringing young people with ME/CFS to testify before the federal advisory committee on CFS (CFSAC) in June…

Suzanne Vernon the Research Director of the CFIDS Association of America – is in a giving mode as well. In honor of a very ill patient she’ll match donations up to a $1,000 to support the CAA’s Research Institute Without Walls fundraising drive. Check  it out here.

Finding Your Center – There’s Actually An App for That – Arianna Huffington will release an app in June that will measure your stress levels and, if you find they’re a bit high, help you go to your ‘center’ and find relief. Interestingly the app will feature a measure something that is consistently off in ME/CFS called heart rate variability as well as heart rate and other features. Blife, an app development company focusing on developing tools for ‘being’ not just doing is producing the app. Check out the GPS for the Soul page here…Its loaded with blogs on reducing stress, being more productive, etc. https://www.huffingtonpost.com/arianna-huffington/gps-for-the-soul_b_1427290.html

Freedom! – While we’re at it there’s an app that helps you to seal yourself away from the biggest boob tube of all time – the internet . 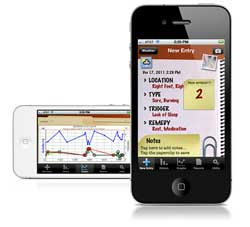 Damon Lynn, a chronic pain sufferer and software programmer created an app that helps people track their pain levels, assess what’s triggering them, which medications work, the effect weather has on pain….just about anything it looks like. It even prints out graphs and charts to show your doctor! (All for $2.99 in the Iphone App store)..

While he was creating his clever app, Damon Lynn did another clever thing – he inserted a code which allowed him to track for a time which conditions people were tracking. Not surprisingly almost 40% were using to track their fibromyalgia symptoms….that almost 60% of people using the app were tracking more than one condition suggests that if you get one pain condition you have a pretty good chance of getting another one.

This looks like a great tool. I can’t see any reason why this wouldn’t work just as well for CFS.(.and would love a review :))

Check out the story here and his website here. .

Rituximab CFS blog -somebody in the US is giving thebikechick Rituximab for her ME/CFS. Check out how she’s doing here.