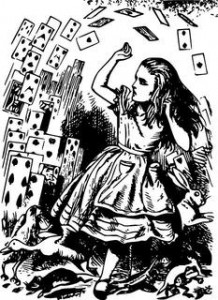 If you’re not a fan of hallucinatory drugs you’re gonna hate ME/CFS.

When I first became ill in March of 1992, the feeling of altered reality inside my head, the shaking which could not be seen in my arms and hands and which later spread to the rest of my body, the uncertainty with which I navigated, never quite sure I could physically accomplish a walk across the floor without falling or bumping into things … these things were bizarre and alarming.

The inability to think clearly, to be able to comprehend what was going on around me, pushed things beyond alarming into the territory of terror. I felt like I was dropping in free fall through the Looking Glass.

I started out with a bad head cold, with a sore throat and severe ear aches, swollen glands in my neck, fever. I’d say I was pretty sick but it was a normal sick. After a week or so, that changed. A new symptom emerged and laid itself atop my virus-ridden state. Something started going seriously wrong with my brain.

Inside my head … didn’t feel right. Now, I was already dealing with a bad cold, and that didn’t “feel right” either. But this was different. Disturbingly different. But also not completely unfamiliar.


Many moons ago when I was a spring chicken in the 1970s I did some experimenting which I won’t go into here. Suffice it so say that this new symptom was becoming strikingly similar to some of the less satisfactory experimentation from an era gone by. If you’ve never done this type of experimenting you won’t know what this means. But if you have it will speak volumes to you. I felt like I was peaking on LSD. And that was never good.

Of course, if you have ME/CFS, chances are you have an all too clear recognition of what I am trying to describe.

My senses and thoughts were a jumble of chaos rolling in a dryer on full tilt, like a kaleidoscope of confusion, full of faulty sensory messages. Was I going to fall down? Nope, but it felt like I was. Is the floor coming up and the walls pressing in? Again, no. But tell my beleaguered nervous system and brain that. Trying to talk and make any sense … forget it. That just wasn’t going to be happening for awhile. And no way could I understand what was said to me.

Problem with this was that the peaking experience did not last an hour or two or three. It lasted six weeks. Six weeks of trying to care for my children while my husband was out of town except for the weekends. Trying to get everyone to the dentist before our coverage ran out later that month. Trying to … think … trying to get a grip on what was happening to me. That never happened. Even yet, I really don’t know what happened.

Here’s the point though. What happened was so far beyond being tired, or lazy, or unmotivated, or living with a little pain or … or anything we’d consider normal.

I was 36 years old, I’d been this person for over three decades, and I know what is normal and what is way the heck from the outer limits. This is true for all of us, and that’s why I’m writing this.

We know our bodies. We know ourselves. And we know when our lives have been turned inside out as if some alien had come to reside within us against our wills.

This illness is bizarre. Its symptoms are out of this world.

It’s like having had too much to drink, but you weren’t drinking. Still you feel like you are staggering, your hands don’t function quite right, your vision can’t quite focus and neither can your thoughts.

It’s like being in a room à la the ’70s with old-fashioned psychedelic black light posters and strobe lighting. Only the poster and lighting combo back in the day was set up deliberately for people who wanted to feel messed up and disoriented. Out of their body and at the same time overcome by its being overcome.


The difference here is that nobody would choose to experience this from the beginning of their day to the end of it … maybe their day doesn’t end because sleep also gets messed up … so maybe it … never ends.

Who would choose that?

Back in 1992, it did come to an end for me, fortunately. After six weeks, I was back to normal. As mysteriously as the cloud descended upon me, it lifted. I had gone for some tests, but most of them didn’t take place till I was better, and the results all said I was right as rain.

I was right as rain too, until that October, when I caught another cold. Within hours the whole psychedelia mushroomed into full-throttle surround-sound. And it brought a new symptom with it. My left arm got hit with what I thought was tendinitis, and began to swell from shoulder to fingertips. It soon spread to my right arm, so that both arms were useless and swollen. My legs had some swelling but not nearly so severe.

This all lasted six weeks. And then, as it had earlier that year, it went away without a trace.

That was the pattern for the next seven years. First a cold, then ME/CFS for six weeks. The cold usually went away really fast though.

In 1999 I got a cold, went through the usual routine but after six weeks, my symptoms remained.

I had just gone chronic. And my life began to change, as more and more pieces dropped off in ways I could never have imagined.

You could have put me in a sensory deprivation tank and I would have been totally busy with the chatter and rushing in my own nervous system, the vain attempts to capture fragments of a thought like trying to catch butterflies when your net has no netting.

Watch those butterflies — whoosh! — fly away. Leaving you with a brain that is still churning out gibberish that you still can’t control. Don’t worry about what it is, what is being “said” … none of it creates a full thought and if it did, you wouldn’t be able to comprehend it.

See? This is one of the scariest things about ME/CFS.

I don’t like being crippled. I still get that way sometimes though it has been lessened by diet changes, castor oil wraps and chiropractic. But I can live with not being able to walk or do up buttons or move without pain.

It’s awful, don’t get me wrong. But it’s not like being thrown into dementia on a psychedelic cloud. It’s not like having your brain quit working.

I said back then that my brain felt like a big old empty barn with the doors wide open and the wind blowing through it.

I said a lot of things. I spent a considerable amount of time trying to describe something that is well-nigh indescribable. Someone who’d never experienced it would never get it because they’d have no frame of reference for it. And someone who had experienced it wouldn’t need my description … and maybe couldn’t follow it anyway. Because their brain was addled by ME/CFS.

Still, knowing that someone else had also experienced it, knew how gruesome it is, sympathized with the enormity of what I was dealing with … I continued to try to put it into words.

Nobody should ever go through something as traumatizing and harrowing as this and not have at least a memorial to the atrocity. And so I continue to try to convey the carnage with words.

Meanwhile we will continue to find ways around them and their indifference. We will keep telling the truth, painting our pictures, for all of the people who will listen, who do want to know, who trust us that we’re going through something shocking. And it will never be true that we left anyone uninformed that wanted to know.