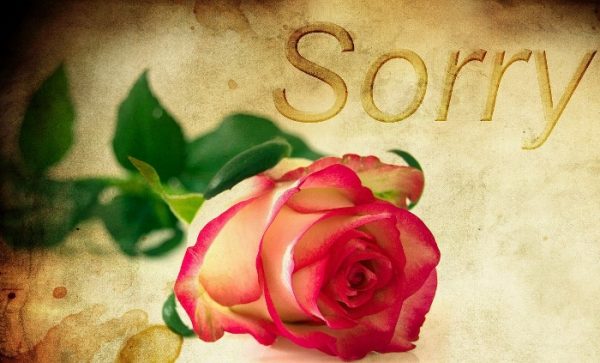 I’m Canadian, so I hear a lot of good-natured jokes about how Canadians apologize all the time. It’s funny in part because … in part, it’s true. But you know who else apologizes a lot? Chronically ill people. And that ain’t so funny.

Now some of us were probably like that before becoming ill. But what’s particularly interesting and maybe a bit disturbing, is how many of us have gone from being confident, even strident, self-assured people unapologetically filling our space to … sorry for requiring someone’s attention, sorry for having needs, for taking up too much room, too much time … too much air …

Do you know what I mean? Do you know some chronically ill who do this? I did it. Maybe you did it too. If not, you probably know someone who have been shrunk this way by their unending illness.

I had been a busy, opinionated woman before I got sick. My husband Alan and I homeschooled our five kids. I helped run a county-wide homeschool support group and was on the phone with members 40 hours a week.

We went to every field trip and if I didn’t help organize it I kept my finger on the pulse of every event. I had a to-do list that I’d drawn 5 columns onto for every day of the week. I never forgot a detail.


I was involved in several departments in the church I attended, and scheduled some others that I wasn’t part of. I was a moderator on three different forums (years before I found Phoenix Rising) and doing the occasional paid editing work.

Alan and I ran a website with 40 writers, I wrote two or three articles on various topics for the website most days and edited everything that went on the site before I published it.

You bet I was opinionated. I was sought after in my particular circles. I expected people to respect my space. And mostly they did.

And then I got sick. Over a couple of years I down-sized my life, left all my positions of action and influence … and lost all the people I’d felt were part of my life. Well, they weren’t. And it took a toll on me.

I was so astonishingly expendable. That was an enormous shock. Almost two decades later, it’s still a shock when I think about it. I used to think about it all the time.

Eventually I got to the point where I did not spend so much time on it any longer. But when I do for more than a minute, the whole thing flares up for me again. So I try to avoid doing this.

Life without the things that made me feel valuable and engaged took a toll on my sense of identity and left me feeling lost. I had no currency to offer anyone — and nobody was clamouring for it anyhow. And certainly nobody was giving me any. What I used to get from other people … never came anymore.

Life went on around me … or no, it didn’t. I was so far removed from any of that. I saw my kids, my husband, my mother and my naturopath — and I know I was lucky to have them. But … things had gotten so much smaller for me. I had gotten much smaller.

I didn’t feel that I had anything to offer anymore. I just didn’t feel like I mattered. I forgot what it was like to matter. To other people and to myself.


And then I found Phoenix Rising, and I saw people with my apology syndrome everywhere I looked. People would preface their post with an apology — I’m sorry, you probably won’t find this very interesting. I’m sorry for taking your time. I’m sorry for sounding stupid. I’m sorry if this post is too long. I’m sorry … I’m sorry …

I would exchange private messages and emails with other Phoenix Rising members. This was a wonderful experience for me after years of isolation. It was a whole new life opening up for me! But still I apologized. And so did my friends when they wrote to me.

I decided to try to change my ways. I decided to go back and re-write any apologies that came out of my keyboard.

Instead of saying I was sorry, I would say …. I wasn’t able to get back to you sooner … without apologizing. I would take a deep breath and launch into my story that I found interesting and refused to worry about whether the recipient would concur. I’d state my differing opinion and let it stand without … apology.

You get the idea.

I found that it required a huge change in my vocabulary, my way of wording things. My way of thinking. It took work. But I have found that it has been worth it for me.

With a few close friends I would talk about this common malady we shared, and we would try together. We would assume that our friends wanted to hear what we had to say.

And in the process we would shore each other up with acceptance, and nurturing words that underscored that yes, they are important and yes, they are worth being listened to. Yes, we cared about each other. That was gold right there, my friend.

Boy! Could I get mad. I tapped into an absolute fury that I realized I had been brewing and bubbling since I first got sick and sidelined.

I decided it was okay for me to speak up and say I don’t like that. I don’t want to do that. I need something. This makes me angry and I’m done swallowing it. I’m bloody well going to voice it. Don’t like it? Too bad.

I swung pretty far in the opposite direction for a time, and realized eventually that I needed to find a balance. But that balance had to include my right to be. Without apologies.

It’s an ongoing process, giving myself permission to fill up my life, with myself, for myself. Taking other people’s time, requiring other people’s attention. Expecting to be part of the living, noise-making world.

Our chronically ill lives may not be very big anymore. They may not encompass the interests and people and activity that we enjoyed in the past. We may not get the kind of encouragement and acknowledgement we did in the past. But what we have is ours, and it is hard-won. And nothing to apologize for.

Have you caught yourself apologizing for your existence? Please feel free to step up here and use your voice. I want to hear it.

Image by kalhh from Pixabay