Graham, Janelle and Bob, have once again excelled themselves with their latest take on the ‘poisoned apple’ that was the PACE Trial… 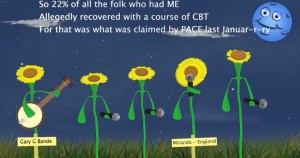 Once upon a time, long, long ago a king and queen ruled over a distant land. The queen was kind and….

Whoops, sorry there! I got confused for a moment. Wrong fantasy tale…

Several years ago a team of psychologists and psychiatrists published the first of their fables about the effectiveness of CBT (and graded exercise) in treating ME/CFS. It was known throughout the world as “The PACE Trial”.

A group of valiant, honest crusaders, mostly members of Phoenix Rising, struggled diligently and bravely to produce an analysis of the faults of the trial and, hosted by Phoenix Rising, published their report.

Inevitably, the medical world ignored us.

Thankfully, in addition to our analysis, many others sent letters to a variety of medical journals, containing scathing scientific analysis, creating havoc in their wake.


But, lacking their linguistic expertise, Graham decided to take a different, satirical approach, and calling on the support of friends and colleagues, and on the graphical skills of his son, Ian, created a series of videos illustrating some of the absurdities of the PACE trial and its subsequent series of papers.

The latest two offerings focus on the claims that CBT promotes recovery from ME/CFS:

The song, a hillbilly sunflower animation, showcases the talents of people with ME/CFS from around the world: friends, friends of friends, and online volunteers.

The song came first and was written by Graham, Leela and Ahimsa, with the theme tune to the Beverley Hillbillies in mind, and it was very fortunate that GarageBand (Apple music creation software) had a banjo jingle that really suited it. The music is pure GarageBand, blended, along with the singing, by Dez.

Video 7, like the ones before, put together a lot of work by many friends here, trying to simplify a very complex and muddled situation.

(Some of the earlier videos have been translated into German, Norwegian and Czech, so if anyone out there wants to translate any of them into other languages, we’d be happy to help.)